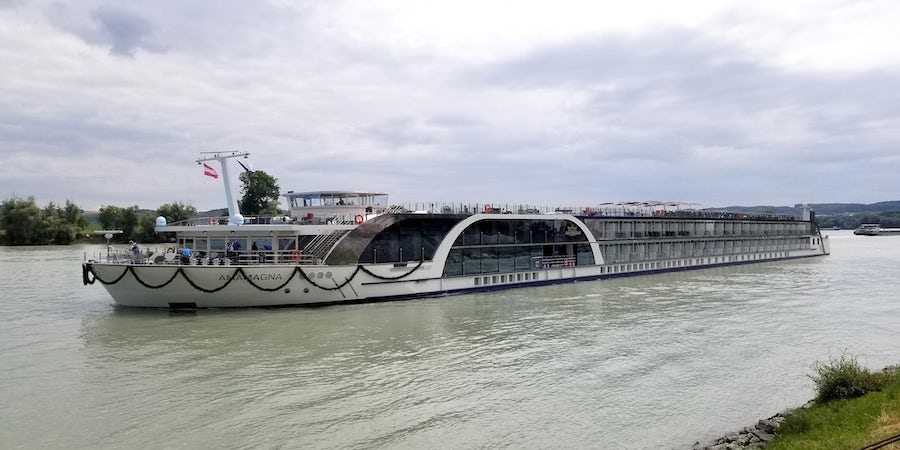 (12:50 p.m. EDT) -- With her signature grace, TV personality Samantha Brown christened AmaMagna on Thursday, naming the special AmaWaterways ship – which happens to be almost twice as wide as a typical river vessel.

"I name this ship, AmaMagna. May God bless and protect her and all those who sail on her, forever more," Brown said before swinging a bottle of Veuve Cliquot Champagne into the hull of the 22nd river ship in AmaWaterways’ fleet. (The bottle bounced on the first attempt but broke the second time around.)

The naming ceremony took place alongside the Danube River in Grein, Austria. The self-proclaimed "girl with the best job in the world" performed her godmother duties before celebrating with her family, AmaWaterways owners Rudi Schreiner and Kirstin Karst, passengers, locals and media.

Karst likened asking Brown to be godmother to a marriage proposal. Thankfully, Brown, whose. PBS series "Places to Love" (sponsored by AmaWaterways since 2017), said yes. A longtime travel evangelist, Brown spoke of her love for travel and belief that the new luxury of travel is meeting and connecting with people.

"Is an incredible honor," Brown said, adding that watching AmaMagna develop from renderings to full-fledged ship is a job she's taken "very seriously."

Ahead of the christening, the ship sailed into Grein, where passengers on the sundeck waved to a crowd – including an oom-pa band and costumed actors -- as the ship pulled alongside giant white tents set against sunny blue skies.

The pre-ceremony party commenced with waltzing to Stauss' Blue Danube Waltz. The pros started things off, inviting passengers (as well as Brown, Schreiner and Karst) to join in the dancing. Entertainment rolled on, with songs from The Sound of Music and a tribute to 80s musician Falco. Passengers, media, dignitaries and locals mixed, enjoying Kaiser beer, Champagne, wine and traditional Austrian snacks before heading to the main tent for the big event. Brown mugged for the cameras, flexing her muscles next to the dangling bottle of Veuve while simulating a practice run at bottle-busting.

Schreiner kicked off things, welcoming the crowd and the mayor of Grein, Rainer Barth, who spoke of the maritime tradition of his quaint city of 3,000. "I wish many relaxed and safe cruises for AmaMagna," Barth said.

Karst and Brown followed, with Karst thanking the godmother for her continuous partnership, and Brown talking about the joy of travel.

Speeches -- and a short blessing -- complete, the action moved pierside, where Brown smashed the bottle on AmaMagna's hull.

A christening, sometimes called a naming ceremony, is a long-held cruise ship tradition ostensibly created to bring good fortune to the ship, its crew and its passengers. While christenings often take place before ships sail with passengers, AmaMagna debuted in May and has been sailing the Danube ever since -- and generating a fair amount of buzz along the way.

AmaMagna is unique among river cruise ships sailing Europe's main waterways in that it is 72 feet wide -- almost twice as wide as others. The double-wide construction means the ship has significantly more space, which AmaWaterways has used to create more restaurants, a larger gym and spa, and large cabins and suites, many of which feature full-sized balconies. It also means AmaMagna can only sail itineraries on the Danube, sailing between roughly the Rhine-Main-Danube Canal, near Vilshofen, Germany, and Bucharest, Romania. The ship's width won't permit it to pass through locks beyond the canal. Most itineraries on AmaMagna take passengers from Budapest to Vilshofen, or vice-versa, with extensions offered in Munich, Prague and/or Budapest.

The ship features seven suites -- more than any other ship in the fleet -- and was designed with families and group travelers from North America in mind. Nineteen cabins can accommodate three people or more, and 16 cabins connect. Accommodating more than two people per cabin is still a relative rarity among river cruise ships.

It's not just the space of the ship that sets it apart; it's also designed to be green, with an engine configuration that sometimes relies on electric power and is designed for fuel efficiency.

The unique nature of the ship -- and the fact that AmaWaterways has orders in for a handful of new ships through 2022 -- has people asking whether we'll see another Magna-sized ship from the company, perhaps on the Rhine River. Schreiner says it's too early to commit to that kind of project, but the company is eagerly watching how passengers react to AmaMagna.