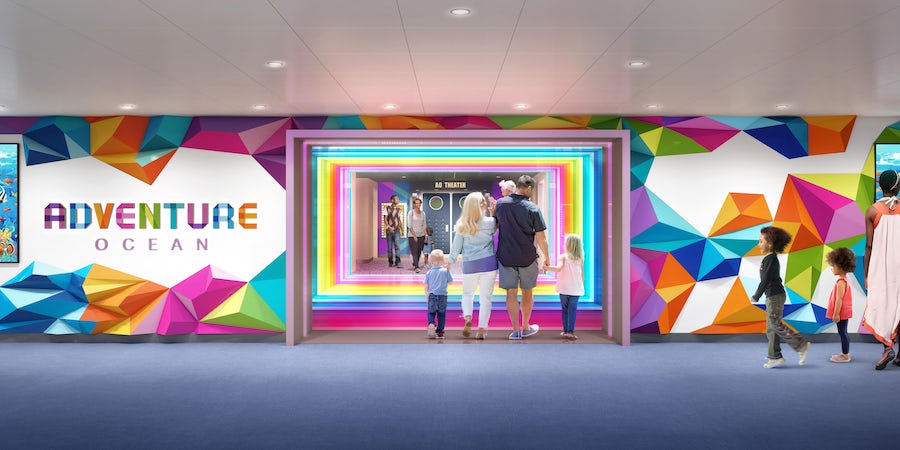 Royal Caribbean to "Amplify" Allure of the Seas Cruise Ship

(10:10 a.m. EDT) -- Allure of the Seas will undergo a 58-day, $165 million dry dock in late winter/early spring 2020. When it emerges, it will feature new top-deck amusements, including the Ultimate Abyss and trio of Perfect Storm water slides, a Music Hall, an expanded Giovanni's concept and completely redesigned Adventure Ocean kids' and teens' spaces.

Allure will be the second Oasis-class ship to receive a Royal Amplification. Oasis of the Seas will go under the knife later this year for a virtually identical overhaul.

The top decks of Allure of the Seas will be almost completely transformed with new features that will include the 10-story Ultimate Abyss slide; the Splashaway Bay kids aquapark featuring twin drenching buckets, three small waterslides, splash pools and water cannons; and the Perfect Storm trio of waterslides: Typhoon, Cyclone and Supercell.

But it's not just action-packed attractions the space is getting. The reimagined pool deck will feature The Lime & Coconut bar concept that was originally introduced on Navigator of the Seas and will also be on Oasis of the Seas. Like the version of Oasis, Allure's The Lime & Coconut will be spaced out across two locations on the pool deck. The deck will also feature a wider variety of seating, including cabana-like "casitas," daybeds, hammocks and swing chairs.

Additionally, the top deck will get new hot tubs, and the adults-only Solarium will be spruced up.

The dining options onboard Allure of the Seas will also be tweaked with a new-for-Royal Italian concept, a barbecue joint and a sports bar and arcade.

New to the line will be Giovanni's Kitchen & Wine Bar, a twist on one of Royal Caribbean's signature eateries. While the venue will still offer family-style dining, the menu will be enhanced with more Italian staples like hand-tossed pizza from the new in-house pizza oven, an expansive charcuterie station and a wide selection of wines and limoncello.

Following the trend of barbecues at sea, Royal Caribbean will add Portside BBQ to Allure of the Seas. The menu will feature favorites such as brisket, pulled pork, chicken, burnt ends, mac and cheese, homestyle cornbread and more.

Allure of the Seas will also receive a Playmakers Sports Bar & Arcade, which is quickly becoming a Royal Caribbean signature spot. This bar is the perfect venue for adults who want to watch the big games on big-screen TVs with ice-cold beer, as well as kids and teens who love arcade games. There's even a menu of kid-friendly bar bites.

Other new culinary and beverage spots being added during the refurb are: El Loco Fresh, which features casual Mexican street fare-style items; the Bionic Bar by Makr Shakr; and Sugar Beach, a sweets shop with more than 220 types of candy and ice cream.

Nightlife on Allure of the Seas will also be amped up during the 58-day refurbishment with the addition of a two-level Music Hall and a dedicated karaoke bar.

Music Hall, which can be found on all of Royal Caribbean's Quantum-class ships and will soon be added on Oasis of the Seas during its refurb, will offer up a revolving set of cover bands, ample lounge seating on two levels and a large dance floor.

Spotlight Karaoke will be the ship's dedicated karaoke bar with both a main stage and private rooms for those who are a bit more shy.

Royal Caribbean's youth programming will also receive a total makeover with all spaces for babies, kids and teens being reimagined.

Adventure Ocean, Royal Caribbean's popular kids club, will receive an entirely new layout with new spaces dedicated to STEM, physical activity and chilling out. Play Place will be a whimsical spot for younger kids with climbable creations, while the Workshop will offer hands-on art, science and tech fun. Kids will be able to engage in some friendly competition in physical, interactive games at the Arena or chill out in the Hangout, which will feature several gaming consoles.

AO Babies will be a new sport for babies and tots, while AO Junior will be for the 3- to 5-year-old set with experiential activities to keep them busy.

The teens will also get a new space with a secret speakeasy-like entrance leading into a lounge with gaming consoles, music, movies, chill seating and an outdoor deck.

Allure of the Seas will return May 10, 2020, in Barcelona. From there, it will operate a summer season of seven-night Western Mediterranean sailings that visit Palma de Mallorca, Marseille, Florence/Pisa (La Spezia), Rome (Civitavecchia) and Naples/Capri.

Allure will reposition to Miami in November 2020 for the winter season, sailing seven-night Eastern and Western Caribbean cruises.