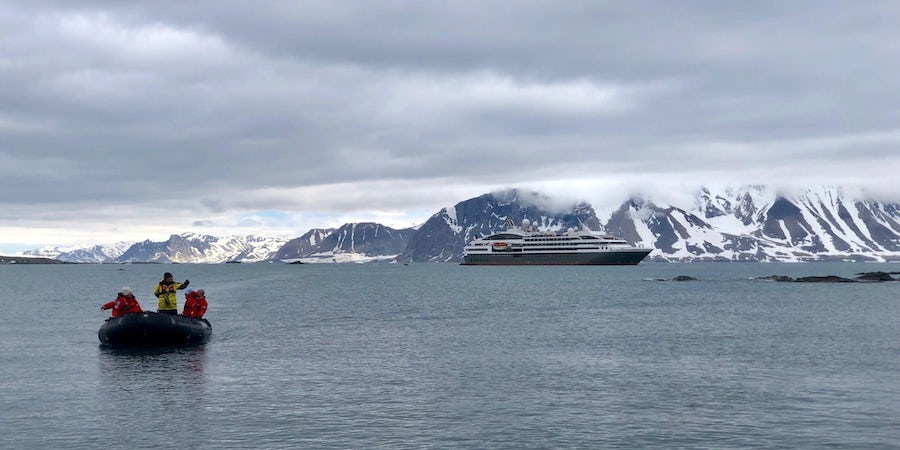 Just Back From A Tauck Small Ship Cruise: 5 Reasons An Arctic Cruise Belongs On Your Bucket List

As part of its expansion with small ship cruising, Tauck has teamed up with French cruise line Ponant to offer sailings in Svalbard, an archipelago high above the Arctic Circle. We sailed on the tour operator’s inaugural cruise departing from the world’s northernmost town --  Longyearbyen, Norway --  into a wonderous, frozen and utterly remote world that never failed to wow. A second Tauck/Ponant sailing is set for July 2020.

The 186 guests on board the Ponant ship Le Boréal were a well-traveled bunch, many of whom had already cruised the Galapagos and Antarctica with Tauck (and other luxury operators). While those southern destinations might top expedition cruisers’ bucket lists, there are many reasons to consider the high Arctic, too.

In Africa, it’s the Big Five. In the Arctic, visitors are on the lookout for the Big Three:  polar bears, walruses and whales. We spotted multiples of all three during a seven-night sailing around the various islands of Svalbard, about 1,200 miles north of Oslo. We also saw reindeer and thousands of birds, from black-legged kittiwakes to little auks. Other species to look for include the shy arctic foxes and ringed seals.

Not surprisingly, polar bear sightings top most wish lists. An estimated 3,000 of the carnivores populate Svalbard, outnumbering the human population of 2,700 or so. But in this vast wilderness the size of West Virginia, the bears are widely dispersed, so there’s no guarantee you’ll see one. In fact, Tauck intentionally omits photos of polar bears in its Arctic promotions.

But see them we did. In fact, Tauck’s onboard guest lecturer -- BBC filmmaker Peter Bassett,  who traveled with the ship as part of Tauck’s BBC Earth Journeys partnership -- had just noted in his opening talk that Svalbard is a prime spot for viewing the furry behemoths, when the captain announced a polar bear alert. The audience beat a hasty retreat from the theater to the starboard decks.  With binoculars and telephoto lenses poised, we were thrilled to spot a mother and two cubs on an ice floe.

Later, we’d glimpse beluga, humpback and fin whales, and even a blue whale (the world’s largest animal).  Twice on excursions to rocky beaches, we quietly approached walrus colonies lazing in communal heaps. Occasionally, one would ease its massive bulk into the sea for an all-you-can-eat clam buffet.

All in all, Bassett gave four lectures about his life as a wildlife photographer, accompanied by special videos created specifically for Tauck. A dozen Ponant naturalists were also on board to accompany small groups on daily excursions using 10-passenger Zodiacs.

Ice reigns in the Arctic, even in summer. And as we learned, it comes in varied forms:  sea ice (frozen sea water); fast ice (ice attached to the shore);  brash ice (ice that drifts with the currents) and the most dramatic glaciers – frozen rivers of ice.

Almost 60 percent of Svalbard is covered in glaciers – 2,100 or so in all. Cruising in Zodiacs, we pondered the Negribreen Glacier’s 12-mile ice shelf, where the monolith hits the coast. We peered at giant ice caves carved by the sea, and dodged sea ice bobbing on the water’s surface.

Three takeaways: 1) Sea ice is noisy. It emits popping and fizzing sounds. 2) Ice takes on varying hues. In cloudy conditions, it appears an ethereal blue. 3) Sea ice is more dazzling than the finest Baccarat crystal. On one outing, a crew member fetched a delicately etched chunk of ice and displayed it in a Veuve Clicquot champagne bucket, to the delight of the passengers.

The Arctic’s thick permafrost layer renders tree and shrub growth impossible.  But the tundra is by no means barren.

Delicate flowering plants bloom in summer. One of the most ubiquitous is the compass plant, so named because its delicate pink flowers first emerge on the south side.

In some spots, fields of thick moss create a spongy landscape. Orange lichens stand out against a backdrop of snowcapped mountains. And rocky beaches are littered with curious objects like walrus skulls, whale bones and Siberian driftwood. It’s like nowhere else on earth.

Longyearbyen, the departure point for our sailing, is a three-hour flight from Oslo. It’s situated on Spitsbergen, the largest of the islands within Svalbard archipelago. From the summer solstice until August 20, the sun never sets. If you savor long days, you’ll love this region.

And if the idea of too much sun makes you worry, relax. The ship combats the Midnight Sun with thick blackout curtains, which kept the cabin dark and cozy. While theoretically the sun could keep the bar going all night, most passengers on our cruise – all Americans, most 65 and older – were in bed well before midnight.

While you won’t see it on an Arctic cruise, which usually takes place in the winter,  Longyearbyen’s location makes for a long, dark winter. The sun officially returns on Feb. 16, but in Longyearbyen, surrounding mountains block its appearance until March 8. On that day, locals mark the end of polar night with the Soldagen or Sun Day celebration. One of our onboard naturalists told us he wept when he saw the first returning glimmer of sunlight.

Not many people can say they’ve visited a land where polar bears outnumber humans.  Another tidbit to drop at a post-trip cocktail party: You’re accompanied during onshore excursions by rifle-toting guides – just in case.

That protocol is also in effect in Ny-Ålesund, a research settlement we visited. Someone is on polar-bear watch 24 hours a day, and doors remain unlocked should a hapless wanderer need immediate shelter.

At almost 79 degrees north, Ny-Ålesund is the world’s northernmost settlement.  This is where Norwegian Roald Amundsen, the first explorer to reach both the South and North Poles, took off in an airship in December 1911 to the North Pole. A small, but excellent museum chronicles those exploits, the settlement’s past as a mining outpost and its present as an international research station.

Slightly south of Ny-Ålesund at 78 degrees, Longyearbyen claims fame as the world’s northernmost town (as opposed to settlement). In the past decade, tourism has grown, spawning outfitters, shops and galleries. Get close to a polar bear (stuffed) at the delightful Svalbard Museum. Then buy a polar bear hat in the gift shop to wear back home. It’s a guaranteed conversation-starter.