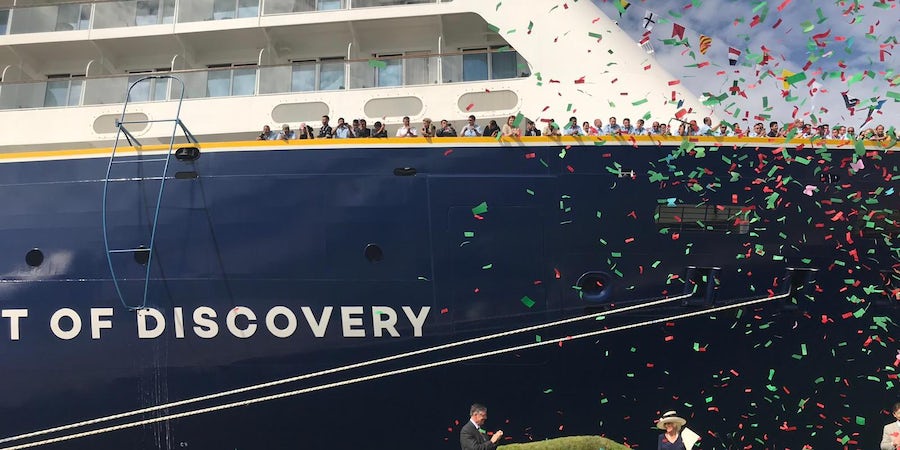 (4:30 p.m. BST) -- With the iconic White Cliffs of Dover in the background and a gorgeous blue sky overhead, Saga's Spirit of Discovery was officially named by HRH The Duchess of Cornwall at the port's new Western Docks today (July 5).

Cruise line executives, local dignitaries, press and travel agents gathered for the naming ceremony event, which is a traditional part of launching a new ship.

Taking place on the redeveloped quayside, The Band of Her Majesty's Royal Marines Collingwood (pictured above) began the ceremonies, followed by speeches from the Captain, Julian Burgess, who said:

"It is certainly a great honour to be chosen for the command of this great ship and be apart of this quayside garden party -- a first in my 39 year career.

"This ship lives up to if not surpasses our expectations and we are very much looking forward to our maiden voyage, which is a first -- sailing around the British Isles with a British flag on the ship."

And chief executive of Saga Travel, Robin Shaw: "This is an amazingly proud moment for Saga. We started this journey to build something special nearly three years ago. There has been much blood, sweat and tears, but being here today makes it all worthwhile.

"Spirit of Discovery is the only small new-build ship being built for the UK in decades. We think she is small, but perfectly formed -- taking our design cues from the best in contemporary hotel design."

"There’s a reason customers come back; The crew makes Saga what it is."

These were followed by the main event, as The Duchess of Cornwall smashed a jeroboam of specially-blended Hush Heath Estate sparkling wine against the hull of the ship to mark its official naming.

Before the ceremony took place, guests were treated to a very British garden party and afternoon tea on the quayside. The Duchess of Cornwall was also given a tour of the £346 million, 999-passenger ship -- including some of its 540 all-balcony cabins and suites, its speciality restaurants, spa, theatre and Lido Deck.

Spirit of Discovery is Saga's first ever new-build ship, and also the first new ship built specifically for the UK market since the launch of P&O Cruises' Britannia four years ago. Spirit of Discovery arrived in Dover's Western Docks last Friday, June 28, and marks the first ship to be named in the port in more than a decade.

Spirit of Discovery will replace Saga Pearl II, which is almost 38 years old.

Saga Cruises has also partnered with Jools Holland who is set to perform this evening with his Big Band in the ship's The Club by Jools, a speciality venue inspired by 1950s cabaret lounges.

The ship will depart on its inaugural voyage, a 13-night cruise around the British Isles, on July 10.

The keel was laid for Spirit of Adventure -- the line's second new-build ship that will debut in 2020 -- at the Meyer Werft shipyard in June 2019. It will replace Saga Sapphire next year.