You may also like
Dismiss
Just Back From The 80s Cruise: Talking Cruise With Rock Star Dee Snider
Just Back From The 80s Cruise: Talking Cruise With Musical Icon Sheila E.
Live From Carnival Sunrise: First Impressions of Triumph's Extreme Makeover
The Jane McDonald Interview: On Cruising, Touring and What Ship She'd Like to Sail on Next
Live From Oceania Insignia: Why A Western Caribbean Cruise Can Be A Perfect Spa Vacation
Q&A With Seth Rudetsky of Seth's Big Fat Broadway Cruises
Live From the Impractical Jokers Cruise: 7 Takeaways From Our Time Onboard
Exclusive Q&A: Ben Bouldin, Head of Royal Caribbean Cruise Line in the UK
Live From Celebrity Edge: A Cruise That Seems Normal Again; "I'm So Hopeful" 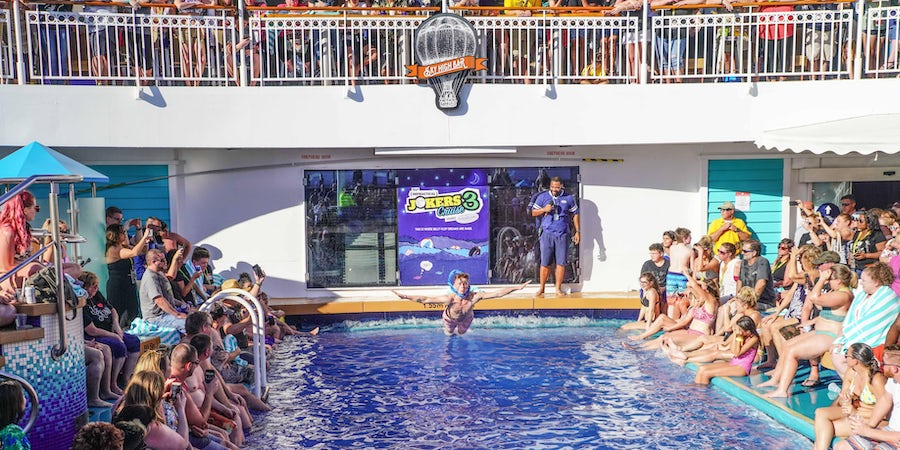 Impractical Jokers Cruise, Round 4: A Chat With Joe, Murr and Sal (Photo: Will Byington)

Impractical Jokers Cruise, Round 4: A Chat With Joe, Murr and Sal

Impractical Jokers Cruise, Round 4: A Chat With Joe, Murr and Sal (Photo: Will Byington)

(2 p.m. EDT) -- If you're familiar with popular television show "Impractical Jokers" and you're a seasoned cruiser, you might already know about -- or even have sailed on -- the truTV stars' annual comedy cruise.

What inspired your first theme cruise?

The catalyst for the first annual Impractical Jokers cruise, Joe said, was an episode for the TV show that was filmed on a Sixthman cruise, unbeknownst to passengers. After they finished shooting, he said fans approached the Jokers and suggested that they take their act to the seas.

"We thought about it and said, 'You know, that might be a lot of fun,' and we ended up doing it," Joe said.

What is the atmosphere like on an Impractical Jokers Cruise?

"It's a real special energy and vibe on that boat that I haven't seen re-created elsewhere," Sal said. "We give our heart and soul and energy into this cruise, and it's good for us that it's about once a year, because it takes that long to recover and get geared up for another one."

For Sal, the cruises are a collision of worlds for the Jokers, where they are surrounded by not only fans, but also family members, fellow comedians and crew members from their own show.

"Me personally, that was my first cruise and experience ever with it, so I think that I'm probably in for a very, very rude awakening the day I take a normal cruise," Sal said.

"It's all fans ... A lot of people just come solo because they know they'll have that in common with everybody on the cruise," Joe said, adding that the onboard activities are open to everyone who sails.

Murr stressed how many different age groups are present: "It's also a family-friendly cruise, so there are tons of families, grandparents, parents, and the kids are all there celebrating."

What activities would make fans of the show want to join this cruise?

If you're a true fan, there's a chance even you will get tired of seeing the Jokers by the end. That's how much fan interaction they cultivate on their cruises.

"You literally can't miss us on that boat," Joe said. "We're either doing our own show or crashing someone else's show, but every night ends with us onstage and with the crowd singing. We are the first ones up and the last ones to go to bed every night for five days. If you are a fan of us, you probably get too much of us."

Between the partying and activities, Murr explained that fans will have lots of different types of opportunities to interact with their favorite celebrity comedians.

"We're out there every single night singing and dancing with fans, and partying with them," Murr said. "We have all sorts of individual activities we host with fans too, so there's something for everyone."

Can you tell us anything about the 2020 lineup?

While the full list is still being worked out, the Jokers were able to confirm the names of two staples: Karaoke Killed the Cat and Cipha Sounds.

"Those are two names that we're happy to say," Joe said, revealing that those two are always part of the top things that fans list as a favorite experience in their feedback after the cruises.

What is there to do onboard if you aren't a fan?

The short answer is: not much.

"Shuffleboard," Joe said. "There's a bowling alley; they can do that. There's a penny arcade if they're into it. Everything else, they're basically just gonna have to go to bed, because it's all Jokers all the time."

"We want to make people not have that much to choose from so it's not overwhelming," Sal said. "We actually have the opposite problem: There's so much to do, we kind of try to streamline it. But I have full confidence that people who come on the boat will never be short of anything to do to entertain themselves."

Will fans have a chance to mingle with the Jokers outside of planned activities?

"It's kind of like hanging out with your best friends from TV for a week in the Caribbean," Murr said.

The Jokers spend their free time on the boat talking with fans and posing for photos, Joe explained. "We've immersed ourselves with the fans. We made that decision when we took the first trip. We were like, 'Look, we're going to be locked on this boat with these people -- 2,500 people for five days. Let's make the most of it, have fun and really get in there.' We try to meet everybody, between the four of us on that boat, in one way or another."

What are you most looking forward to on the cruise?

For Sal, it's all about the raging parties.

"I think there's two things that I savor the most: watching the comics, and we close every single night with a party. All bets are off when we step onto the cruise. We're prepared to go to battle and live like we're 20 years old again, so at the end of every night, basically everybody -- no matter what they were doing -- kind of funnels through to the one big ending event of the night. That is always just a home run. It's just so, so much fun," Sal said.

Joe said it's special for the Impractical Jokers to spend some time with their fans. His favorite part of the last cruise was when they were in between two activities, so he jumped in the pool and spent an hour hanging out. "It was impromptu, it was unplanned, and it was just a moment, Joe said.

"I really like the ability to actually spend time with and meet fans and actually get to talk to them, as opposed to when we bump into fans when we're filming. When we're filming, it's a hidden-camera comedy show, and they're ruining us at work, so we have to shoo them away, and we don't get to really spend time with them or thank them. So this is, for us, a good way to actually meet the people, hear their stories and really get to spend some time and take it all in," Joe said.

What will be new on this cruise?

Every year, the Jokers feature new activities alongside old classics. This year, in addition to many fan favorites like Traffic Cam, Late Night Podcast and karoke, Murr said he will be leading a sandcastle building competition for families at the Nassau port stop.

Should fans be prepared to be pranked?

No need to watch your back if you're going on the ship: The Jokers are officially on vacation onboard, and they will not be pulling pranks on their fans.

"We're off duty here," Joe promised. "This is just us being friends with everybody. Everybody on the boat knows the show, too. So everyone expects it, so we wouldn't do anything there.

Murr said it best: "It's basically a vacation with us, where we're all just hanging out and taking a cruise together because we don't want the pressure of having to do that anyway. It's more a celebration of the fandom."

Has a passenger ever tried to pull a prank on you?

Murr said sometimes cruisers will come dressed as the Jokers, especially as characters they have created in the show. And sometimes, overzealous fans will take it a step further and try to pull a fast one on the Jokers.

"Inevitably, a fan will come up and try to eat off my plate like we do in the show," Murr said.

But it's hard to prank a professional.

"There's no catching us off guard," Sal said. "We're masters."

If you could spend most of your time in any part of the ship, in your free time, where would it be?

All that pranking can lead to a lot of tension, and the Jokers like to relieve it in the onboard spa.

"The three of us actually have a standing spa appointment," Joe said. "The boat has like one of the best spas, so we make sure to hit it up ... at least once or twice."

Other than pampering themselves with massages, Joe added that he enjoys some time in the ship's casino. "There's also a casino there, and I like to spend a lot of my time at the craps table or blackjack table. We actually gamble with fans, so that's a lot of fun. You really can't do that anywhere else, so that's really cool to do," Joe said.

What do you want fans to know when deciding to take this cruise with you?

"If you're on the fence, just give it a try. ... Most people say it's the best vacation they took -- certainly the best cruise they took -- because we really give our all to make it something that is completely unique that even our fans couldn't get elsewhere; we hold it near and dear to our hearts. It's a lot of work, and we keep doing it because it's that special."