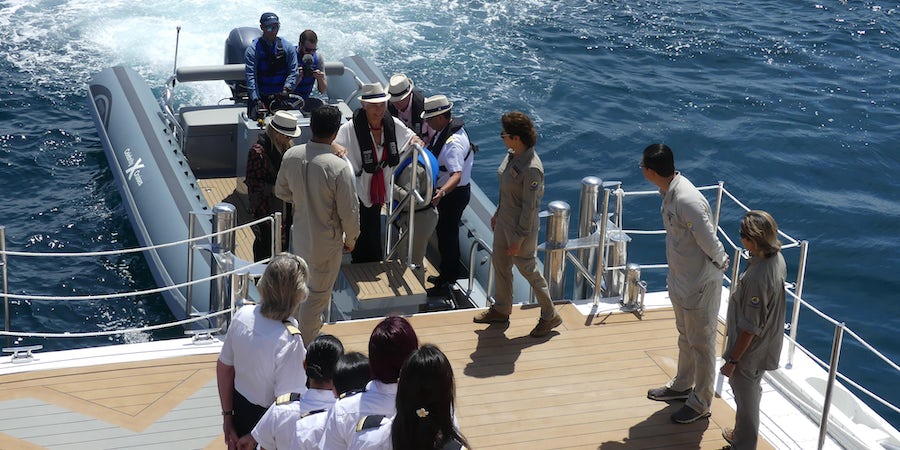 (11:00 a.m. EDT) -- Celebrity Cruises welcomed its first-ever purpose-built Galapagos-based cruise ship, Celebrity Flora, to the fleet on a bright, warm Ecuadorian afternoon. In the waters around the ship were some of the Galapagos' most renowned denizens: blue-footed boobies, sea lions and pelicans.

The ceremony started with the arrival, by specially-designed tender boat, of the ship's godmother, Yolanda Kakabadse, a former president of World Wildlife Fund International and a former minister of the environment for the Republic of Ecuador. With her were Richard Fain, chairman and CEO of Royal Caribbean Cruises Ltd.; Lisa Lutoff-Perlo, president and CEO of Celebrity Cruises; and the ship's master, Captain Vladimir Armas Teran. An Ecuadorian pipe band -- the only one in the country according to a Celebrity spokesperson -- provided the musical backdrop for the quartet.

"Celebrity Flora is meant to transform cruising in the Galapagos," Lutoff-Perlo said inside the ship's Discovery Lounge, where the bulk of the naming ceremony took place. "We wanted the ship to match the beauty of the destination."

But being beautiful isn't enough, both Lutoff-Perlo and Fain said, emphasizing the environmental friendliness of the ship.

Lutoff-Perlo said she wants Celebrity Flora to be the most environmentally friendly ship in the region, and Fain echoed the sentiment as he ticked off a list of areas in which the ship excels: lower carbon footprint, reduced food waste, no single-use plastics, a better underwater noise signature and a dynamic positioning system that eliminates the need for an anchor.

The company's commitment to conservation and sustainability in the Galapagos informed their choice of Kakabadse as Celebrity Flora's godmother. She admitted in a quick video clip that she hadn't even known that such a thing as a ship's godmother existed.

For Kakabadse, the ship's environmental footprint -- not it's luxurious amenities -- is the key component of what makes Celebrity Flora special. For her, sustainability is luxury. Supporting scientific research and allowing passengers to be part of that exploration is luxury.

"If it was just luxury, it would mean nothing without the rest of it," she told Cruise Critic.

Kakabadse was the last to speak at the naming ceremony, which also included blessings from a Catholic priest and rabbi (who ended his blessing with the blowing of a shofar, a spiral instrument made from a ram's horn), as well as the singing of the Ecuadorian national anthem by two young school girls.

The ceremony ended with the breaking of a bottle of Champagne on the ship's bow, which was triggered when Kakabadse cut a ribbon, made by hand of plantain fibers. Beneath the bow, a small net was set up to catch all the pieces so that none of it ended up in the water.

Want to read more about Celebrity Flora? Check out 7 reasons to cruise Celebrity Flora in the Galapagos and our recap from a visit to the shipyard where the vessel was constructed.