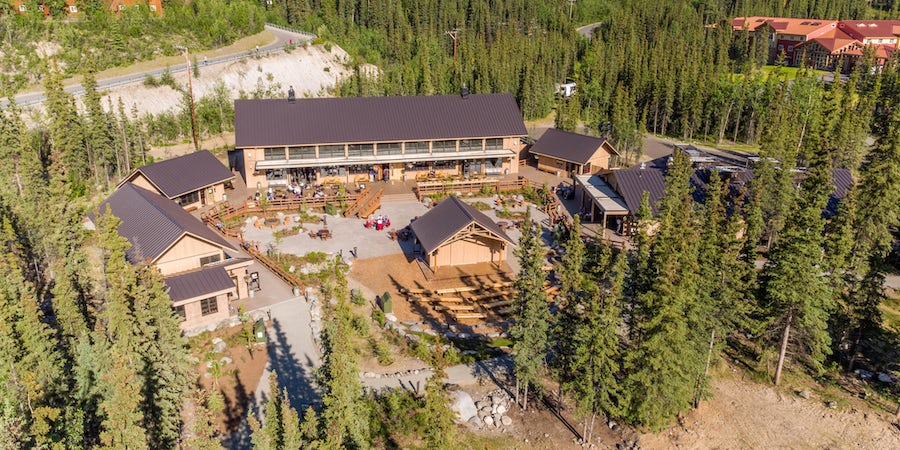 The building features 99 rooms, including 55 junior suites -- a first for the company's 68-acre hotel property, which sits at the edge of the Nenana River. McKinley Chalet Resort is a land-based resort option for passengers at either the start of end of their cruises with the Holland America. Ridge View is also open to guests of its sister company, Princess Cruises.

The highlights of the Ridge View building are the spacious junior suites. Decor is modern but still feels rustic, thanks to clever design elements, such as a giant topographic map that covers a wall from floor to ceiling, cute moose-head wall rack and wooly throws and pillows. Bathrooms feature heated floors, a luxury on cool mornings, and big subway-tiled showers. The piece de resistance is the balcony, which offers stunning views of Mount Healy. Two padded chairs and a heavy tree-stump table make it the ideal spot for sipping coffee and easing into the day.

Standard rooms don't offer the balconies or views of Mount Healy, but they're similar in design and decor to the junior suites, with open layouts and simple cabin-inspired sophistication.

Ball described Ridge View as "rustic but contemporary," adding that the design was a nod to nature, and the large balconies and open-air spaces embrace the majestic Alaskan backdrop.

"We want to be sure we have the best place in Denali," Ball said.

The junior suites offer more space than standard accommodations, and they feature pull-out sofas, which Ball and Ashford said will likely appeal to families. Both described these as a test model that might eventually be rolled out to more rooms.

"We're all here together to bring a great guest experience to the people," Ashford said.

The Ridge View addition is the latest for McKinley Chalet Resort, which in 2016 added Denali Square, a complex that includes outdoor space with fire pits, live music, shops, an artist in residence and Karstens Public House, a tavern-style eatery.

In addition to the Ridge View opening, the team was in town to celebrate the opening of Fannie Q's Saloon at adjacent Princess property Denali Princess Wilderness Lodge. Part bar, part restaurant, the hotspot feels like a modern salon, featuring long tables for dining, a big bar and chic versions of traditional Alaska lodge decor, like antlers hanging from the ceiling and a large 48-star American flag. It also offers live entertainment, such as a piano player who performs a range of hits from the likes of Johnny Cash and Alabama.

Fannie Q's, which opened in May, is named for Alaskan prospector, trapper, cook and rabble-rouser Fannie Quigley. Dishes are locally inspired and include offerings like bison sliders and bear-lard pie.

The Holland America and Princess lodges are popular add-ons for cruise passengers seeking to add land sightseeing in Alaska's interior to their at-sea experiences. Both cruise lines offer cruisetour packages that include stays at the lodges, land-tours and sightseeing train travel. And while the lodges are open only to cruise passengers, restaurants and bars are open to everyone, so it's not unusual to dine and drink alongside Alaska residents.