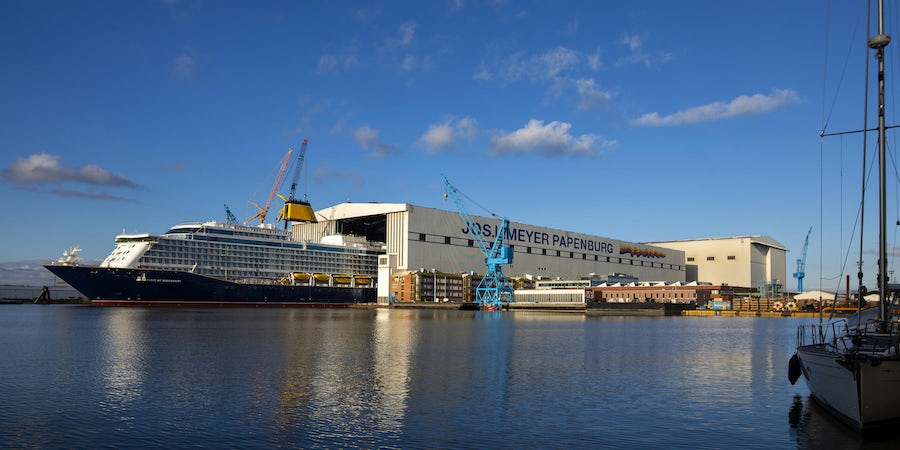 (11:30 a.m. BST) -- Spirit of Discovery, the first new-build ship for Saga Cruises and the only cruise ship being built for the British market this year, has left the shipyard on the first leg of its journey to the UK.

The 999-passenger, 58,250-tonne vessel reached the North Sea after leaving the Meyer Werft shipyard in Papenburg, Germany, on May 26, and being towed along the River Ems, marking the official start of Spirit of Discovery's journey to its homeport of Dover.

The ship was floated out of the shipyard earlier this month and will now undergo technical and nautical sea trials until mid-June. Saga, which provides adults-only cruises for the over-50s, will officially take delivery of the ship on June 20, prior to the naming ceremony in Dover on July 5.

Nigel Blanks, Saga Cruises' chief operating officer, said: "Our major milestones for Saga Cruises and Spirit of Discovery are now coming thick and fast and it is amazing to see her complete her conveyance towards the North Sea.

"This ongoing journey sees everyone at Saga Cruises pioneering the future of British boutique cruising, creating a host of unique, new experiences, both ashore and at sea, and providing a fresh new concept in the global cruise market."

Spirit of Discovery is Saga Cruises' first ever new-build ship and will sail on its inaugural voyage, a 13-night cruise around the British Isles, on July 5.

A sister vessel, Spirit of Adventure, is also being built at the Meyer Werft shipyard and will be launched in 2020. The vessels will replace Saga's current ships Saga Sapphire and Saga Pearl II.

Both new ships will be all-inclusive -- Spirit of Discovery from November 2019 and Spirit of Adventure from its debut -- with all house spirits, wine, beer and soft drinks included in the cruise price, plus tips, transfers and Wi-Fi.