You may also like
Dismiss
Just Back From Hurtigruten's Finnmarken: The First Cruise Ship to Set Sail, Post-Covid
Did Ed Sheeran Name His Baby After Antarctica Cruise?
13 Times This Cruise Cat Was Absolutely Purr-fect For Halloween
Cruising the Newest Ship Afloat: Live From Celebrity Apex
Live From Celebrity Edge: A Cruise That Seems Normal Again; "I'm So Hopeful"
Live From Royal Caribbean's Odyssey of the Seas: Why You'll Never Be Bored on This Cruise Ship
Celebrity Beyond Completes Sea Trials; Moves One Step Closer to Debut
NCL Reveals More Dining, Design Details on New Cruise Ships Norwegian Prima and Norwegian Viva
Celebrity Cruises Partners with Annie Leibovitz, Renowned Photographers in Project That Recognizes Diversity in Travel
A 'Thor: Love and Thunder' Cameo That Gets Cruise Fans Excited 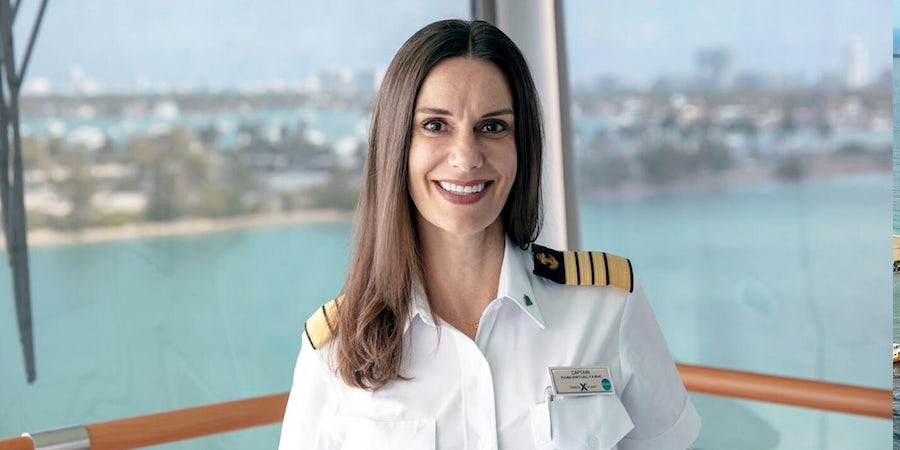 (12:30 p.m. EDT) -- We first spoke with Celebrity Cruises Captain Kate McCue, the first American female to captain a large cruise ship, just after she became captain of Celebrity Summit in 2015 at the age of 37.

Back then, Celebrity (and the wider industry) was a very different place. Only three percent of the Bridge team fleetwide was female, compared to 22 percent today (30 percent on Celebrity Edge and 50 percent on newly launched Celebrity Flora) -- a change largely driven by Celebrity's CEO and President Lisa Lutoff-Perlo.

At the same time, Captain Kate -- as she is fondly known to her many fans, both on social media and the Cruise Critic Boards -- has become somewhat of an icon; a poster woman for all that is achievable when you set your mind to it. Today, she boasts more than 73,000 followers on Instagram (@captainkatemccue) and has become an influencer in her own right.

We sat down with her on Celebrity Edge, which she will helm beginning in September 2019, to ask her about the changing landscape, her army of Instagram followers, her cat (who has become an Instagram sensation herself) and how she always wanted to be a mermaid. Celebrity Edge makes it European debut in Southampton on Monday.

Q: How do you see the landscape -- in terms of female representation within the cruise industry -- now compared to four years ago?

A: It is incredibly different. Leaps and bounds. We have the most representation of captains, with three of us. So … what we need to do is we need to focus on making sure it's not just a company thing -- that what we do at Celebrity is becoming a universal trend in the maritime industry.

And one of the really big things I am focusing on now is to be a voice, because if you don't know about it you would never pursue it. My idea of a cruise ship captain when I was growing up was Captain Stubing on "The Love Boat." That's the only thing I could ever think of, and to be able to put a bit of a different spin on the Captain's role -- and have Captain Stubing meets Julie the Cruise Director meets all of the other characters -- and kind of give that option to people is important, because you don't have to fit into this stereotype.

And hopefully we're breaking down those boundaries and opening up the world so people can see themselves, and using tools like social media and Instagram is one of them to show an inside look and a more personal side that people don't know about whether it's the career or how you have a life with a career like this outside the ship.

Q: Was it a surprise to you how you've become this Instagram sensation with more than 73,000 followers?

A: Big time. I didn't know anything about Instagram when I started with Celebrity and the social media team said you've got a good opportunity here to give people a glimpse into your life and I said: "OK, well let's do this." But it's funny, I think the cat's Instagram (@bugnaked) gives a more in-depth look into for example the cabin; you can see what the Captain's cabin looks like, because I don't usually post in my cabin as the action is out and about. But the combination should give people an inside look into the life.

Q: So that was the original intention then – to give people a glimpse into this life?

A: Yes. People say: "Oh, Instagram just focuses on the beauty of things," but that's my reality. My reality is I live in this bubble. I live in paradise. Whether that's sunrises, sunsets, dolphin watching, excursions that I'm going on, the guests that I meet, the crew that we have onboard -- all of that should be highlighted. So, you won't find things that are I guess the harsh reality, because I don't have a "harsh reality." None of that is manufactured, it's just what we do.

Q: Let's talk about the mermaid costume (One of her most famous posts is her in a mermaid costume, an image which has garnered 2,412 'likes' so far.)

A: I always wanted to be a mermaid. My favourite movie growing up was "The Little Mermaid," but you can't make a career out of that -- well, actually you can; in Vegas they do have professional mermaids in tanks, which I need to check out because I'd like to do that on vacation at the Silverton Casino.

Q: So, your followers can hope to see you again in a tank in Vegas?

A: Oh yes. Maybe we'll post that. We'll put the time and date.

Q: But being a captain is not a bad second best?

A: No, but mermaid and photography are two hobbies that really, I enjoy.

Q: How do you make that balance between your full-time job and being a social media star with this huge number of followers?

A: Because I was given this platform, it's my responsibility to use it to the fullest advantage and that's getting the image out there so we can blur those lines for the gender gap.

Q: You're going to take the helm of this ship later this year -- are you excited about that?

A: I'll have three weeks of handover, so I'm going to go back to the Equinox after her "Revolution" part of Celebrity's fleetwide upgrade program and take over June 1… do half of my contract there till August 17, fly home, drop off Bug Naked, get on a flight and meet the Edge in Civitavecchia on August 19 where I have the three weeks of handover. It's great that I've been able to get on for the inaugural, the naming and now this cruise, as well, to get a little bit familiar with it. I've been up to the Bridge, but I haven't been allowed to press any buttons!

Q: What do you think of the ship?

A: The ship is mind-blowing. When the hype came out about Celebrity Edge, I thought, "How can it live up to this?" And then I came on and thought: "Oh my gosh, she's gorgeous." Each ship is special in its own right and even the sister ships are individual. So whatever works on Equinox might not work on Silhouette and vice versa. So finding those nuances, whether its ship handling, or -- a lot of times -- the itinerary, will drive the environment onboard.

The nicest part of coming on here was seeing so many of the crew members I worked with on both the Summit and the Equinox, and it's like coming home.

Q: What's the thing you're most looking forward to about taking the helm on Edge?

A: It is very cool to have the flagship. It is, but you know I haven't gotten to experience everything yet, so I'm looking forward to that. And the itinerary, too, as I haven't been there for the past four years. (The ship will continue sailing the Mediterranean and Greek Islands through October, before repositioning to the Caribbean in November.)

Q: You have quite a big following on Cruise Critic, and some of our members will not be happy that you are leaving Equinox. Do you have a message for them? Come and join me?

A: Absolutely! They are very, very kind, and very loyal to the brand. When they come onboard -- quite apart from the hardware -- all our loyal guests will say: "This is family. And this is what we love about sailing on Celebrity Cruises."