You may also like
Dismiss
Cruising the Newest Ship Afloat: Live From Celebrity Apex
7 Highlights From a Week Onboard Celebrity Apex
Live From Celebrity Edge: A Cruise That Seems Normal Again; "I'm So Hopeful"
Another Big Week for Cruising in England as More Ships Set Sail, Arrive For Restart
Live From Royal Caribbean's Odyssey of the Seas: Why You'll Never Be Bored on This Cruise Ship
MSC Cruises Extends Seasons of MSC Virtuosa Cruise Ship in the UK, MSC Bellissima in Dubai
Celebrity Beyond Completes Sea Trials; Moves One Step Closer to Debut
NCL Reveals More Dining, Design Details on New Cruise Ships Norwegian Prima and Norwegian Viva
These Ships Are Coming Back To The U.S. in 2022: Here’s Why You Should Care
Live from Grandeur of the Seas: The Beloved Lady G Cruise Ship Still Reigns 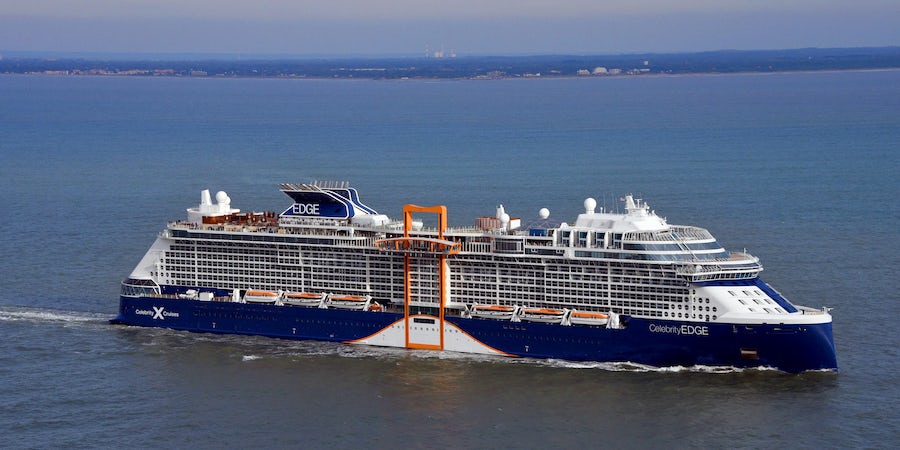 (4:40 p.m. BST) -- Celebrity Edge made its European debut in Southampton on Monday, heralding the start of its season in Europe.

The ship stayed here for just two days, but next year sister ship Celebrity Apex will not only be named here, but sail a mini-season from the UK, before redeploying to the Med. Apex will not replace Celebrity Silhouette, which will sail a full season out of Southampton in 2020, but arrive just before it.

We got onboard Celebrity Edge in Southampton to find out what aspects of this game-changing class of ships will appeal to Brits.

Anyone who has ever sailed on a Solstice-class ship out of these shores will be only too aware that the social hub of the ship is the Martini Bar on Deck 5. Packed for pre-dinner drinks, and then the place to be after dinner, the Martini bar is buzzing all evening. There is just one drawback -- it's too small.

Edge has a reimagined space, at the bottom of the Grand Plaza with a stage for live music and dancing and plenty of seating all around. The bar is still too small to cope with demand (it's a semi-circle now rather than circular), but it’s still the bar to be onboard and there is a lot more to keep you entertained.

2. The Sunset Bar is a Way Better Space for Sailaway

On Solstice ships the bar at the aft of the ship seats perhaps five or six people, with everyone else on tables either side, or on chairs lining the strips of lawn either side of the top deck of Solstice class ships. And this space gets very busy, with many passengers forced to take tables a deck down outside the buffet.

Edge-class ships do not have a real grass lawn (this does take a bit of getting used to for Solstice class fans. More on that below), but this does have the advantage of a lot more space for tables and chairs. There is also no real estate cordoned off for a fee, as on the later Solstice-class ships.

These have been described as a combination of the top deck of Millennium class ships and Solstice class ships -- a space to relax, hang out and have a bite to eat or a drink at The Rooftop Garden Grill, and listen to live music in the evening. Gone is the real grass, but in comes a lot of real plants, so you do still get that feeling of being somewhere natural.

The space works harder than the Lawn Club area on Solstice class ships, particularly the early models, without the private cabanas; and will likely have a broader appeal as none of it is for fee. Our only concern is it's very exposed and we hope to see some shaded parts installed on Apex, when the ship gets to the UK (not least from rain) and heads north.

The jury is out on these balconies (really, we've only met people who either love them or loathe them. We're in the former camp), which aren't balconies in the traditional sense but large windows that slide up and down at the touch of a button.

We spent many hours sitting in the balcony space, looking out of the window -- not getting cold, not being buffeted by wind, not having to listen to our neighbours' conversation and not turning the room into a wind tunnel when trying to open the balcony door.

We feel they will work well when -- and where -- Apex will be sailing to from Southampton --north to the Norwegian Fjords and the Baltic, plus a Spain and Portugal cruise in mid-April. Especially with the frosted-glass, bi-fold doors, that are currently being trialled in 50 cabins, which adds an extra degree of privacy and softer lighting than raising the shade.

Now that the "Revelation at Eden" show has been pared back from a three-hour interactive, immersive show, to a more manageable 45 minutes, which importantly does not take place during your dinner, we think Brits will love this space (much of the criticism levelled at the show centred on the obtrusiveness of the "Edenists" while diners were trying to eat).

This huge space has no equivalent on Solstice-class ships, but if you imagine the double-height library area with its swing chairs and funky sofas, amplified and flooded with light, and placed across three decks, complete with plenty of real foliage you're getting there. Plus, rather than just tea and coffee in the day, you have an excellent cafe attached which is a great spot to grab lunch.

We also enjoyed the Silent Disco which took place here. We're not sure if this was a one-off, but Eden is a much better spot than The Club, we felt.

We've always rated the food onboard Celebrity ships very highly, but Edge takes it to another level. Even if you are a fan of the giant main dining rooms on Solstice-class ships, with their centrepiece wine tower, eating there every single evening can get, well, a bit samey.

On Edge, the line has opted for in effect four MDRs -- Normandie, Cyprus, Cosmopolitan and Tuscan -- all of which have a distinct identity and design, as well as a selection of different starters and mains in each restaurant.

So, if you're reluctant to fork out for a specialty restaurant (and they are not cheap), then you could do a lot worse than to rotate these four eateries around (and not get bored).

However, if you do wish to splurge then we recommend Raw on 5, a new dining concept for Celebrity. If you like Sushi on 5 you'll love this spot. Not only do you get sushi made by a third generation Sushi master, chef Yoshi, you also get an astonishing array of fresh fish and seafood -- plus a sake menu and sake sommelier on hand, another Celebrity first!

Decried as a bit of a gimmick when it was first announced, it's least sexy function -- acting as a tender platform -- is really its most revolutionary. And for all those ports in Europe where Apex will not be able to dock, this really is a Godsend for the very young, the very old and the mobility impaired.

The tennis court-sized platform also acts as a bar and a restaurant, for a one-of-a-kind dining experience, Dinner on the Edge.

It's less than 10 months till Apex arrives to these shores and after this taste of Edge, we're getting excited already.