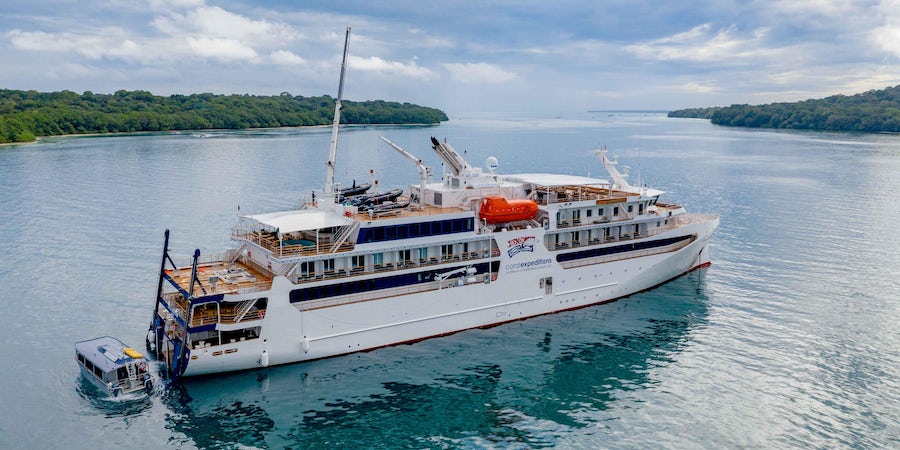 “We look forward to welcoming the Coral Adventurer to home port in Darwin, which will provide a significant economic injection into the Top End economy year-round. Darwin’s geographic location and close proximity to Asia make it a popular cruise ship port which is unique for its close proximity to the CBD,” said Moss.

The 120-passenger Coral Adventurer features elegant cabins and living spaces with décor that reflects Coral Expeditions’ Australian roots and the exotic locations the ship will visit. Specially commissioned indigenous artworks in the ship’s common areas also reflect these locations, with a self-guided art tour available for guests who would like to know more about the works.

Coral Adventurer’s guest observation lounge located in the bridge - a Coral Expeditions trademark – has purpose built seating so guests can view navigation activity and interact with crew during each journey.

A multi-purpose space, the Barralong Room, forms part of an ongoing partnership with the Australian Geographic Society and hosts lectures and interpretive activities connected to each voyage.

Two Xplorer expedition tenders extend the capabilities of the new ship with fast transit and deeper exploration on shore excursions, along with a small fleet of inflatable zodiacs which allow for more intrepid exploration.

Coral Adventurer arrived in Darwin after completing her sold-out 18-day maiden voyage ‘In the Trail of Tasman’, retracing the historic explorations of Dutch explorer Abel Tasman around the Indonesian archipelago from Singapore.

Passenger Trish Rice, who has completed more days at sea with Coral Expeditions than long standing Group General Manager, Mark Fifield, was impressed with the new ship during its maiden voyage.

“Everything is more luxurious with lots of marble and modern decor and there is some wonderful art. The elevator is also new and will be very useful for those who need it.”

Coral Adventurer is designed to take travellers to unspoilt destinations not accessible to large ships and not often touched by tourists. Working harmoniously with the communities along the way, shore excursions are created to promote genuine local interaction and cultural exchange.

Coral Expeditions celebrates its 35th Anniversary year in 2020, when Coral Adventurer will undertake her most ambitious expedition ever with the sold out “Circumnavigation of Australia” voyage departing Darwin on 6 November. The 59-night voyage will make 35 stops at significant historical places that have shaped Australian history in what promises to be an epic adventure.

Another new ship, Coral Geographer, is currently under construction and scheduled for delivery in December 2020.