You may also like
Dismiss
2019 Atlantic Hurricane Season Outlook: What Cruisers Need to Know
Live From Royal Caribbean's Odyssey of the Seas: Why You'll Never Be Bored on This Cruise Ship
"Cruising With…" Set to Return Next Year -- But Without Jane McDonald
Royal Caribbean's Odyssey of The Seas Cruise Ship Officially Christened
MSC Cruises Extends Seasons of MSC Virtuosa Cruise Ship in the UK, MSC Bellissima in Dubai
NCL Reveals More Dining, Design Details on New Cruise Ships Norwegian Prima and Norwegian Viva
These Ships Are Coming Back To The U.S. in 2022: Here’s Why You Should Care
Royal Caribbean Starts Construction On New Utopia Of The Seas Cruise Ship
A 'Thor: Love and Thunder' Cameo That Gets Cruise Fans Excited
Live from Grandeur of the Seas: The Beloved Lady G Cruise Ship Still Reigns 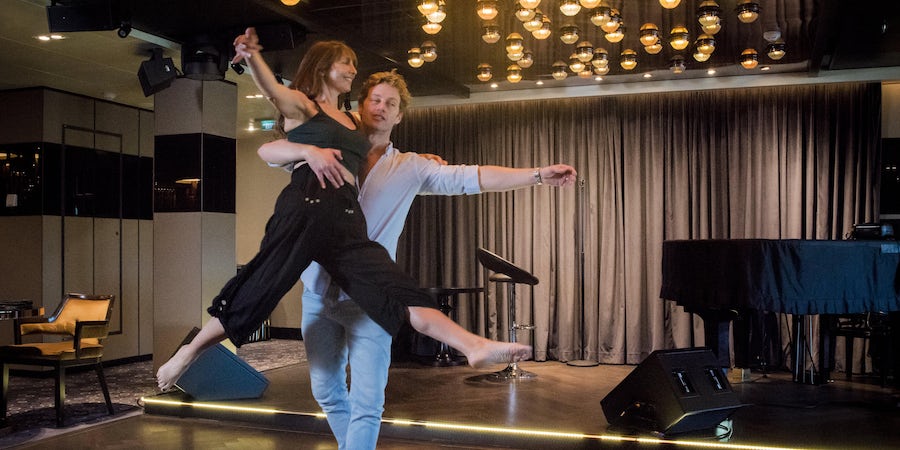 Just Back From a "Strictly Come Dancing" Cruise on P&O Cruises' Britannia: 7 Things Fans Should Know

The partnership between P&O Cruises and BBC's "Strictly Come Dancing" (or simply "Strictly") may be in its ninth year, but like the show itself it shows no signs of getting old.

This year, the onboard experience has been updated, so as well as a host of free Strictly events, participants can now get even more up close and personal with the pro dancers by booking private one-to-one lessons or even having dinner with them.

Cruise Critic joined for the second half of 2019's two-week inaugural Strictly sailing which saw pros Gorka Marquez, Giovanni Pernice, Amy Dowden, Karen Hardy and Trent Whiddon all onboard Britannia at some point during the two-week Portugal and Canary Islands sailing.

Interestingly, this sailing fell during the school Easter holidays and there were plenty of passengers who had booked it for the dates and not for the Strictly connection. Nonetheless, most of these passengers seemed to enjoy dipping in and out of the various dance-related events.

We joined Britannia in Gran Canaria for the second half of the roundtrip Southampton sailing, stopping at Tenerife, Lanzarote and Lisbon before heading back to the UK.

Read on to find out what to expect from such an ‘a-maz-ing’ razzle dazzle cruise.

1. It's Strictly "Fab-u-lous" for Everyone

Keen to learn some moves? The Strictly pros have that covered. Amy Dowden (who partnered Red Dwarf's Danny John-Jules last year) taught a masterclass in how to sway hips and hold arms in the samba.

"We were eliminated by the samba," she joked, "so I clearly need the practice!" Two days later Trent Whiddon (partner of Pixie Lott in 2014) taught us to brush the floor with the inside of our feet in the rumba. "It’s the dance of lust,” he said, “so make it look hot!" We took these dance moves back to the cabin to practice, but others were spied perfecting their steps in those large floor-spaces outside lifts!

Prefer to sit back and watch? You’re in for a treat. The pros performed slick, sweaty, sexy shows in the Headliners theatre. Had there been audience participation we'd have been straight up onto that stage!

And yet we weren’t brave enough to enter the end-of-cruise Strictly Guest Dance Competition. This had a bona fide judging panel (which included the Captain and Karen Hardy) and was a hoot to watch, with the audience choosing the winner.

Top tip: The Strictly masterclasses and shows are packed, so arrive early to secure a good spot.

Once we'd booked our 45-minute private lesson (how could we not?) we became nervous and plagued by uncertainty. How bad would we be? What to wear? Don shoes or bare feet? Enter pro Trent Whiddon who waltzed into our lesson smiling like Prince Charming and putting us at ease.

We decided on the Cha-Cha-Cha and some lifts.

And the class began…with us (not Trent) giggling nervously. Footwork slowly finessed; Trent's clasp became tighter; we looked into each other's eyes (harder than you'd imagine) and within minutes were dancing the Cha-Cha-Cha.

Next: the lifts. Yes there was more nervous giggling from us, but soon we were running into Trent’s arms, pushing down on his shoulder, holding our core tight and beaming from ear to ear as we were hoisted, twirled and swirled. It felt like flying. It felt sexy. “It is sexy,” said Trent. “These dances are all about a man and a woman falling in love.”

Was Pixie Lott much better? "Actually no," said Trent. "You've got real potential. And remember, it's not always about talent. What the public love is a journey." Suffice to say, we didn't want our private lesson journey to end. Was it worth £175? Absolutely -- no woman (or man for that matter) should miss out!

Nothing could match Trent's lesson, but there were other fun ways to get close to the Strictly pros. They did chat shows, meet and greet photo ops and signing autograph sessions. One lady told us how seasick they'd felt, but then they met Gorka and her nausea vanished! Another lady told us how Strictly had made her holiday. "I love everything about the show – the dresses, the stars. I had a photo taken with Giovanni and Gorka and am just so happy."

Faye Tozer from pop group Steps (and a Strictly finalist last year) was also on board. During a Q&A session we learned about her career as well as her journey on the show. "In my opinion Faye," said an audience member, "you were robbed of that glitter ball trophy!"

(Note that Craig Revel Horwood was not on our particualr cruise, but does sail regularly on Strictly-themed cruises -- see below).

Dotted round the atrium throughout the cruise were mannequins sporting the sparkly sequined dresses worn by stars and pros of Strictly 2018. But for £10pp (a steal in our opinion) there was also a wardrobe experience. A rep from Dance Sport International (who makes the Strictly dresses) gave us the lowdown on how each dress is handmade in three days (including the application of thousands of stones and feathers) and starts life as a leotard.

Dig deep and you can buy these same dresses on board (the cheapest was £700) or just have fun trying them on. It was such a thrill to get into Stacey Dooley's Charleston outfit from last year's semi-final and to hear the tassels swish when we twirled!

5. Dinner With The Stars

Brand new this year is a hosted dinner (£85pp) with one of the Strictly pros. We didn't get to attend (though we wished we had) as this took place the week before we hopped on board. We heard through the grapevine, however, that the host was Giovanni, who made sure to keep changing chairs so that everyone got a chance to sit next to him. Grazie Giovanni!

6. Why Strictly And P&O Cruises Are The Perfect Pairing

We caught up with Britannia's Entertainment Manager Neil Oliver who explained why Strictly fits so well with P&O Cruises and why all the Strictly-related events on board are always packed. "We’re about the glamour, the formal nights and dancing, so our guests love it. And because passengers are mainly British they know the stars from Corrie and the telly when we have them on too. I’ve already had several people ask when the next Strictly cruise is!

We’ve definitely been inspired to keeeeep dancing! And if you fancy doing the waltz or quickstep with pros while cruising, there are three more roundtrip Southampton Strictly voyages this year, departing June 2nd on Ventura and June 29th and July 20th on Azura. Other stars on board will include Judge Craig Revel Horwood, Oti Mabuse, Aljaz Skorjanec, Dianne Buswell and Neil and Katya Jones.