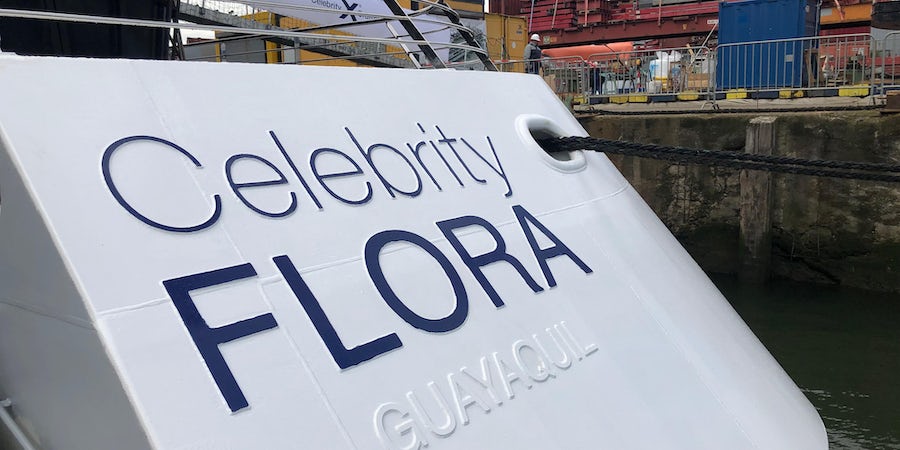 Just Back From Celebrity Cruises' Celebrity Flora: First Impressions From a Shipyard Visit

It's been a long time coming -- especially since Celebrity Cruises' other big ship launch, Celebrity Edge, stole the limelight last year with its ground-breaking design -- but Celebrity Flora in many ways heralds another leap forward in innovation; the line has just been a little more subdued with its approach.

The ship is in its final stages -- it sets sail on May 15 from the Dutch shipyard to the Galapagos, where it will be named on June 30 -- so we got a good idea of the public spaces, a select number of cabin types and the marina.

Here are our first impressions of Celebrity Flora.

There are only 50 cabins, or suites, holding a maximum of 100 passengers (there are no triple- or quadruple-occupancy suites) due to tight capacity restrictions in the Galapagos Islands. Twenty-two are Sky Suites with regular balconies, and 16 have "infinite verandas," the divisive new balcony design that debuted on Edge with a large window that slides up and down at the touch of a button, rather than an actual balcony with a door.

Celebrity CEO Lisa Lutoff-Perlo said: "We would have done them all as Infinite Verandas if we could have done."

Our view: Just as well they didn't. Why? We liked the Infinite Verandas on Edge; we felt they were innovative and helped increase the size of the room. However, many members were not so sure. We're not keen on the Infinite Verandas on Flora. They make you feel like you are in an ocean-view, admittedly one with a giant window, rather than a balcony. Plus, the window only goes down halfway, so it really is a completely different experience from an actual balcony.

In terms of the cabin design, we love that all beds are window-facing, as are the bathrooms. We love the part-frosted, part-clear glass separating the bathrooms from the bedroom, as well as the huge rain shower and long sink with his-and-her taps on either side.

The thick carpet, dark wood panelling and muted beige carpets and walls give every suite a luxurious feel. And kudos to Celebrity for banning all single-use plastic bottles. Instead, you get a water bottle (to keep), and every cabin has a tap-dispensing filtrated water.

The ship looks and feels like a mega-yacht; in fact, it wouldn't look out of place in Monaco, lined up with the other billionaire vessels. And that's not accidental: Lutoff-Perlo calls it "our mega-yacht," and it's the first ship built in Holland in 60 years, a country with a design history of constructing mega yachts.

The aft of the ship, which houses the marina (more on that below), and the stunning Penthouse Suites (we only saw them from the outside), has the most yacht-like feel. You'll find swirling chrome and glass with jutting-out balconies and the name of the ship emblazoned on one side.

Inside, the guest-to-space ratio is vast. This is twice the size of Celebrity's existing Galapagos ship, Xpedition, but carries the same number of passengers. At 5,700 gross tons, this is a relatively tiny ship, but is as big as it gets in the Galapagos -- whether it's the Discovery Lounge, with the biggest screen in the islands; the Seaside Restaurant, with so much space between each table; or the Sky Suites, which start at 246 square feet, not including the 94-square-foot balcony.

Mind you, you will be paying for all this brand-new hardware -- starting prices are roughly twice that of Xpedition, at $7,199 per person for a seven-night cruise (though this does include international flights and transfers, as well as everything onboard including drinks, shore excursions, Wi-Fi and gratuities, which moves the ship into more of an ultra-luxurious category).

For us, the real standout is the marina. Drawing either directly, or inadvertently, on how Edge has revolutionized the tendering process with its moveable "Magic Carpet" tender platform, the Marina -- which lowers down from the aft of the ship -- allows passengers to simply step onto one of the ship's Rigid Inflatable Boats (RIBs).

The RIBs are fixed perpendicular to the ship in clamps, which means they do not move separately from the ship, but rather with the ship. For the mobility-impaired, the very young or the very old, this is enormously significant, opening up excursions to those demographics without the worry of leaping onto a moving boat. They are also around twice the width of a regular RIB, so your knees aren't pressed against the person's opposite.

The marina space for passengers preparing to board the RIBs is similarly generous and includes a shower area, lockers and lots of places to hang wetsuits, etc.

Celebrity takes its stewardship of the Galapagos very seriously, and all this luxury does not come at the expense of the fragile environment. (As a side note, neither do passengers: since 2003, passengers have planted 30,000 trees, and 95 percent of them choose to take part in this voluntary sponsorship.)

The one miss, in our view, is the top-deck glamping option. Celebrity Flora doesn't need this gimmickry. Spending the night in a double bed "under the stars" at the cost of $299 per person when you've got a lovely cabin a couple of decks below makes absolutely no sense to us (even if you do get a visit from the Captain in the night).

This is a fine ship -- beautifully-designed, well thought-out, and perfectly in tune with the pristine waters in which it sails and the fragile islands it visits. Celebrity has clearly thought long and hard about designing such a vessel, and it shows.

It does beg the question, however: Will there be a sister -- Celebrity Fauna perhaps?

"I never say never," said Lutoff-Perlo. "It's not that we haven't talked about it, it's just we haven't committed to anything at this point in time."

She added: "But it's not out of the question."