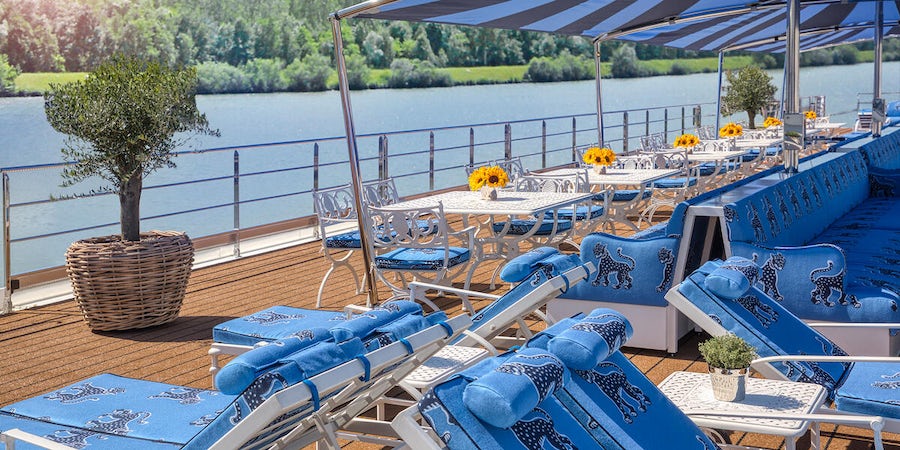 Just Back From Uniworld's S.S. Bon Voyage: A New Super Ship In Bordeaux

Formerly the River Royale, S.S. Bon Voyage – the sixth “super ship” now in the Uniworld fleet – underwent a $14 million renovation in an eight-month period. The 124-passenger vessel is based on the rivers in France’s Bordeaux region, and is meant to evoke France through its décor and dining.

Designed by cruise line owner Beatrice Tollman and her daughter Toni Tollman, S.S. Bon Voyage is all about the details and finishing touches from bow to stern. S.S. Bon Voyage has the cruise line’s signature classic décor, with  marble, polished hardwood, brass and filling the public areas. Uniworld took the ship down to its hull -- Uniworld President and CEO Ellen Bettridge says there was nothing but metal and wires when she saw it – so  designers were able to start from scratch.

Here’s what went into the S.S. Bon Voyage redo:

Like many older ships, the River Royale’s interior design was showing its age, which is what led the company to convert an existing ship to super ship status (this is the second that has been remodeled; last year the company turned River Beatrice into S.S. Beatrice).

The reception area has been reworked to make it more spacious and brighter, which is helped by the immense Murano glass chandelier illuminating it from a magnificent dome above. The brass-coated elevator was moved from the side wall to the center section near the hand-crafted balustrade along the staircase. The only thing that remains from the original ship is the beautiful Murano glass sculpture by a South African artist behind reception.

Cabins have a pastel color base with light blues and greens featured in the line’s signature fabric-covered walls and cushioned headboards. Bedside power and USB outlets now join the starched white linens and monogrammed pillow cases. Even public areas were equipped with ample power and USB ports.

River Royale had only one suite in the aft of the shift. During the remodel, that was split into two cabins; existing staterooms were also combined to make two Royal Suites (which also reduces the ship’s overall cabin count).  Two 210-square -foot junior suites with larger bathrooms are close to reception with two 280-square-foot Royal Suites situated in the middle of the ship, all of which are on deck three. The latter have a separate bedroom and living room with equally large bathroom. These are the only cabins to sport both a shower and tub and come with upgraded Hermes toiletries. Special touches include dedicated butler service and snazzy TVs that drop down from the ceiling if you want to catch a movie in bed.

In France, It’s All About Food And Wine

During a recent media sailing, the head chef for the cruise line shared how the company is increasing its reliance on local markets and cheese and meat purveyors to assure the freshest quality aboard. That’s quite easy when you are in France, and guests are often invited to tag along for the experience.

There is also increased effort behind the scenes to remove plastic from the kitchen in addition to public areas. Guest rooms, for example, no longer have plastic bottled water. Instead, glass carafes of filtered water are replenished twice daily, and guests receive reusable metal bottles to refill at stations around the ship. In the remodel, designers have created more storage space for the kitchen allowing them to be more creative and better organized.

Once known as Blue Fox Café, Le Café du Soleil on the top deck serves light meals at dinner and regular chef-led cooking classes. At lunch, it swaps its name to La Belle Etoile with an impressive soup and salad buffet and cooked-to-order flatbreads. It is especially popular on sunny days when panoramic views surround the dining space. Poolside service is also a pleasant option.

Space behind the main bar has been converted into a brasserie with café seating and all-day coffee and refreshments. In Le Grand Fromage, the main dining room, the buffet was repositioned from against the wall to the center to allow more diners to enjoy it at the same time. A new chef’s station has been added for all meals, too.

Like S.S. Joie de Vivre – the line’s other French-themed super ship that sails on the Seine -- this ship has a private dining room known as Le Cave du Vin, but unlike its sister ship, it serves only food and wine pairings (instead of live chef demonstrations).

Wellness On The Water

Uniworld’s wellness program targets the active, health-minded passenger with access to dedicated staffers who lead yoga, guided trekking, and biking sessions. Some of these classes take place in unique, historic locations on shore. The aft of the ship also features a new, heated infinity-edge pool with blue and white tiles imported from South Africa. A fleet of bikes on the top deck is always available for guests. On particular excursions, Uniworld works with local bike partners to make sure there are enough for all interested guests.