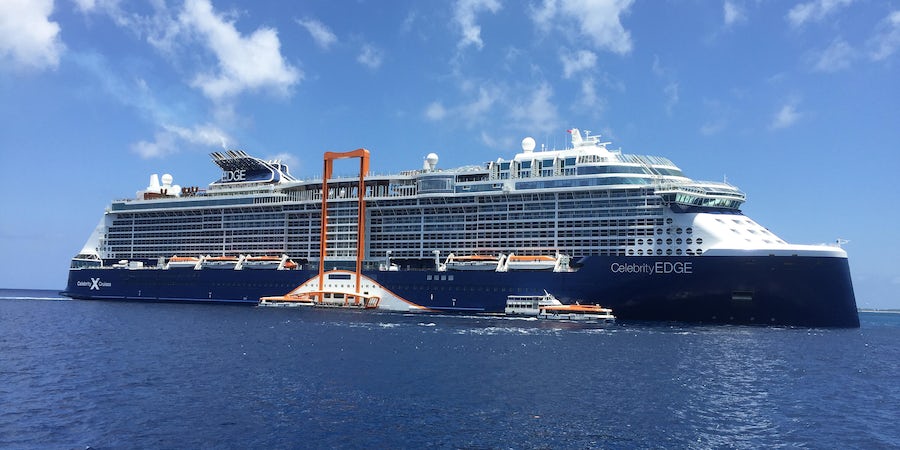 The Edge Evolution: Just Back From Celebrity Cruises' New (and Improved) Celebrity Edge

Editor's note: Content was written in November 2019 and was up-to-date on publication.

(12:38 p.m. EDT) When Cruise Critic editors sailed a preview cruise on Celebrity Cruises' Celebrity Edge in November 2018, we were so impressed that we named it Best New Ship in our annual Editors' Picks Awards.

As cruise lines do with every first-in-class ship, Celebrity took a risk, attempting to balance modern innovation with the needs of cruisers already used to the line's other vessels.

But not everyone shared our sentiments. Shortly after Edge's maiden voyage, Cruise Critic members wrote reviews and took to the message boards to voice concerns about several issues, from obtrusive entertainment to cabin features that they felt just didn't work.

Celebrity listened. Over the past few months, the line has been incorporating feedback from cruisers and evaluating what needs to be tweaked.

"We're working through a few things," said Brian Abel, senior vice president of hotel operations for the entire Celebrity Cruises fleet. "The ship doesn't come to life until you have ... passengers and ... crewmembers onboard. ... You have to give the ship enough time to start living and breathing ... before you ... start making changes."

Following reports that the line had greatly improved the experience on Celebrity Edge, we hopped on another voyage and caught up with Abel to see what, exactly, has been altered. Below is a recap of what you can now expect from a sailing on this groundbreaking vessel.

Eden experience performances, held in the three-deck open-concept Eden bar and lounge, feature a team of dancers, acrobats and jugglers, as well as a sitar player. The first iteration of the show was three hours long and offered about 15 minutes between numbers for the characters, known as "Edenists," to interact with cruisers -- sometimes to the point of making passengers feel uncomfortable, we're told.

"We probably pushed the envelope a little too far," Abel admitted.

The show has since been cut to about 90 minutes, limiting the depth and length of interaction between performers and passengers and also making it easier for cruisers to follow the storyline.

Outside of Eden, Abel says the three main theater shows now focus a bit less on the giant projection screens that were previously the center of the action. Instead, more emphasis is placed on props and scenery that were built to complement the use of the screen. Different lighting effects and more aerial performances have also been incorporated, and a new show will replace "Jewelry Box."

The new performance, which starts out in black and white before slowly turning to color, will feature well-known songs from Coldplay, U2, Imagine Dragons and others. Although the music in the new show is contemporary, several passengers were pleased to hear more tunes from the '60s, '70s and 80s throughout the ship, following cruiser feedback.

Additionally, the ship has added a Beatles tribute performance to its nighttime entertainment repertoire.

Changes have been made to the "Dinner on the Edge" experience, which is offered once per sailing in the Magic Carpet -- a multipurpose rectangular glass structure attached to the side of the ship. (It moves up and down to serve as a bar, lounge, top-of-ship restaurant and even tender platform.) Dinner there has switched from a la carte small plates to a sit-down, waiter-served, family-style affair for a flat fee of $65 per person.

Le Grand Bistro, the ship's French for-fee restaurant (where Le Petit Chef is presented at dinnertime), has replaced its previous breakfast and lunch options -- which Abel said didn't resonate with passengers -- with a sea day brunch twice each cruise for $39 per person. It features a buffet with salad, made-to-order waffles, pastries, bacon, eggs, salmon and seafood, as well as a waiter-served menu with omelets, pancakes and crepes.

Expanded options are also coming to the menus in the ship's four main dining rooms. The menus share a common "Classics" section, but each also boasts a list of options specific to that venue: Cosmopolitan (American), Cyprus (Greek), Tuscan (Italian) and Normandie (French). When the ship begins its Mediterranean season, the current menu will be available for half of each sailing, and a second menu will be rolled out for the other half, offering completely different exclusive items.

Other changes include minor tweaks, like the addition of breadsticks to the Le Petit Chef menu, for example.

We can't mention Edge's cabins without discussing the contentious Infinite Verandas. These porch-like areas in balcony cabins allow for extra space and light, but they feature a window that lowers with the push of a button, rather than a traditional verandah. In lieu of curtains, electronic blinds raise and lower to keep out light and create privacy, and bi-fold glass doors seal off the area to allow the air-conditioning to stay on when the window is opened, keeping the rest of the room cool.

Because they're part of the ship's structure, the verandahs are unable to be changed, which is a bummer for stalwart fans of regular balconies, but the line has listened to complaints about the window shades, which often malfunction and don't close properly. Although Abel says the line is not considering curtains, the ship will be testing out frosted-glass bi-fold doors in a few cabins shortly. If they work better than the blinds, they could be installed shipwide.

One area in which the outdoor spaces are sorely lacking is shade. It's scarce around the main pool unless you pay for a cabana, and it's even more scarce at venues on the upper decks, including the Sunset Bar and the Rooftop Garden. Abel says sun shades will be added to Edge and its subsequent sister ships to deal with the issue.

Wind has also been an inconvenience for passengers dining in the Magic Carpet. Several Cruise Critic members reported that it was too windy for them to enjoy meals there, with strong gusts repeatedly sending napkins flying.

Additionally, the venue is unable to be raised all the way while the ship is at sea, limiting the number of times per sailing dinner is offered there. Abel says Celebrity has noted this, and while nothing can be done to alter the Magic Carpet's structure on Edge, more wind screens will be factored in on Celebrity Apex and other ships with the Magic Carpet.