You may also like
Dismiss
Just Back From Hurtigruten's Finnmarken: The First Cruise Ship to Set Sail, Post-Covid
Live From MSC Cruises' MSC Grandiosa: What's it Like Sailing on a Big Ship in the COVID Era?
Australia Extends Ban on Cruises to March 17, 2021
Wave Season Cruise Deals 2021
P&O Cruises Restarts Cruising For First Time in 15 Months on Britannia
Royal Caribbean Poised to Restart Cruise Operations at Labadee
These Ships Are Coming Back To The U.S. in 2022: Here’s Why You Should Care
Royal Caribbean Showcases New Icon of the Seas Cruise Ship with 'Making an Icon' Video Series
Live from Grandeur of the Seas: The Beloved Lady G Cruise Ship Still Reigns
Just Back From Allure of The Seas' Maiden Galveston Sailing: Hits and Misses 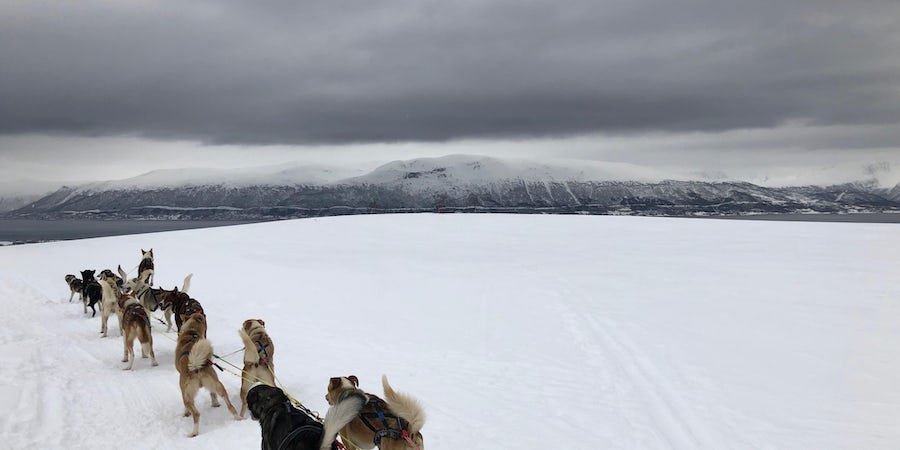 Just Back From Hurtigruten's Richard With Cruise Ship: Southbound From Tromso to Bergen

In the second part of our Arctic Adventure, during which we're trying out the north- and southbound Norwegian Coastal Voyages pioneered by Hurtigruten, we travelled from Kirkenes back to Tromso, the self-styled "capital" of the Arctic, and widely regarded as the best place to witness the Northern Lights.

There's a lot to do here -- and on a typical Hurtigruten voyage, not nearly enough time to do it. When you are travelling on the southbound itinerary the ship arrives at 11:45 p.m. and leaves at 1:30 a.m.! -- which gives you just enough time for the Arctic Cathedral excursion. On the northbound sailing it stops for four hours, so you can at least experience the town.

To make the most of our time in the region, we decided to break the journey (note: this is not possible on the full coastal voyage), to explore the city and report back on what's on offer.

We changed ships for the onward southbound journey -- trying out the refurbished (as of November 2017), Richard With. The ship is the same class as our previous vessel, MS Nordkapp, but its refurb, as well as being more recent, was more far-reaching, with changes to all the cabins, and the addition of several restaurants, public spaces and a corridor of brand new mini-suites.

Once again, we started our adventure in Tromso, where we witnessed the Northern Lights as the ship approached the city, went husky sledding, attended a concert at the Arctic Cathedral and tried downhill skiing, before heading south to Bergen via the Lofoten Islands where we took part in more excursions.

Here are some of our thoughts on the Southbound journey.

Hurtigruten offers a midnight concert at the Arctic Cathedral and Husky Sledding.

The Arctic Cathedral (pictured above) is an imposing sight, a triangular-shaped building that looks like it's piercing the sky on a cloudy day; rising high above the town and visible for miles around. It's a short transfer from the ship and the concert is just 45 minutes in length, which is just as well as it's almost 1 a.m. when it ends. We expected a full production concert, such as you might get as part of a river cruise excursion in Vienna -- brass, strings, perhaps a couple of singers -- but this was just a trio (organist/pianist, a saxophonist and a soprano). It was perfectly lovely, the singing and the musicians were excellent, but we felt it could have been so much more, especially in such a stunning setting.

Husky Sledding is a wonderful excursion -- for all ages. It takes place at the Villmarksenter just a short drive from town. You can either lie down in the cosy sled and be pulled by the dogs, or try your hand at a bit of mushing yourself. The landscape is beautiful and the experience lasts for around an hour. Afterwards you get to meet the puppies; followed by a lunch of hearty reindeer stew. This is a great day out and a perfect choice for kids.

(Note: We also took part in downhill skiing at the recently opened Tromso Alpinpark. This is not an excursion offered by Hurtigruten at time of going to press -- but watch this space).

MS Richard With (named after the line's founder) had a top-to-toe refurbishment in November 2017, and as a result the ship looks and feels new.

Deck 6 saw the addition of newly-designed suites with floor-to-ceiling windows and a genuine luxury feel; a main public lounge with a VR area, an interactive desk (like a giant iPad) and a large TV screen for airing shore excursion information.

All the old furnishing and fixtures were ripped out, to create clean lines and more space; the restaurants and bars were completely redesigned and renamed; and two lecture theatres were added. Despite its advanced years (1993), Richard With looks and feels contemporary.

As with all Hurtigruten ships we have travelled on, the food is without exception, outstanding; and the service -- whether that's the hotel manager, shore ex team, reception, waiters or cleaners -- is deeply professional, friendly and kind (especially with kids).

Hurtigruten offers fewer southbound excursions than northbound due to the limited times in port going south. However, there are a number of options that allow you to jump off the ship in one port and meet it in another. We opted for the following:

Sea Eagle Safari: The fun aspect of this excursion is getting on the safari boat (note, it's not a Zodiac-style boat), from Deck 2 (the car deck) via a ramp. The tour lasts for roughly an hour around a stunning fjord (but what fjord isn't?) on the hunt for sea eagles. The boat operator significantly increases participants' chances by cutting up fish and throwing it in the water, thus attracting first gulls, and then the eagles. It's a very gentle excursion, open to any age.

Horse riding in the Lofoten Islands: This is one of the excursions where you jump off the ship in one port, in this case Svolvaer, and pick it up in the next, which was Stamsund. Of all the places the ships visits, the Lofoten Islands are some of the most beautiful -- sweeping beaches, mountains and crystal clear fjords and lakes. The transfers are long -- an hour each way -- but it's no hardship as the scenery is breathtaking. When you arrive, you kit up and meet your horse, all of which have been pre-selected for you (you tell the onboard team your height, weight etc.). All are Iceland horses, which have famously good temperaments. You watch a short video then you are out in the paddock to pair up. It's a lovely excursion, but the actual time spent riding is short (around 45 minutes), so it's a pity we spent more time trotting around the resort rather than on the beaches and in the fields.

Coastal hike: All the hikes are with the excellent onboard expedition team, led by Johan Pearson. These vary by difficulty level and where they go -- some are in the mountains, others through forests, ours hugged the coast near Trondheim. We started out early -- 7:40 a.m. -- when it was still a brisk zero degrees centigrade, but it wasn't long before we warmed up and peeling off layers became essential. A week earlier, Johan explained, there was still snow on the ground. For us, it was more like spring. An hour or so later, walking along the most pristine coastal path with an interesting commentary and a stop for hot Ribena (for the kids) coffee for the adults, the ship came back in sight and we hopped on a bus for the short transfer back. An excellent way to start the day.

Marble Mine: Our final excursion was to a marble mine near Kristiansund, which on paper sounded fascinating. Certainly, the ride there was extraordinary -- along the fabled Atlantic Road, an engineering marvel of bridges and walkways which passes along part of the most dangerous stretch of Norwegian coastline, but was supremely calm the day we visited.

The Torgett marble mine lies deep within a mountain and reminded us of the Mountains of Mordor from Lord of the Rings. It's startling to be told you're almost a kilometre underground with hundreds of tons of mountain bearing down on you. You jump on a boat and are gently transported through the tunnels and along the crystal clear water. The problem is, it's over within minutes and after a hearty soup the rest of the excursion is a series of videos about mining.

It's just three days from Tromso to Bergen, but it felt like an accelerated journey through the seasons, from deep mid-winter to the start of spring. And that's the beauty of taking this extraordinary trip at this time of year. There are so many highlights, so much beauty to appreciate and so many experiences to take in it feels as if you have been on an epic adventure, even in the space of just a few days.