You may also like
Dismiss
CDC to Make Masks Mandatory in Cruise Terminals, Cruise Ships in the U.S.
Live From Royal Caribbean's Odyssey of the Seas: Why You'll Never Be Bored on This Cruise Ship
"Cruising With…" Set to Return Next Year -- But Without Jane McDonald
Royal Caribbean's Odyssey of The Seas Cruise Ship Officially Christened
Disney Wish To Feature New Onboard Entertainment Firsts from Disney Cruise Line
NCL Reveals More Dining, Design Details on New Cruise Ships Norwegian Prima and Norwegian Viva
Royal Caribbean Starts Construction On New Utopia Of The Seas Cruise Ship
A 'Thor: Love and Thunder' Cameo That Gets Cruise Fans Excited
Live from Grandeur of the Seas: The Beloved Lady G Cruise Ship Still Reigns 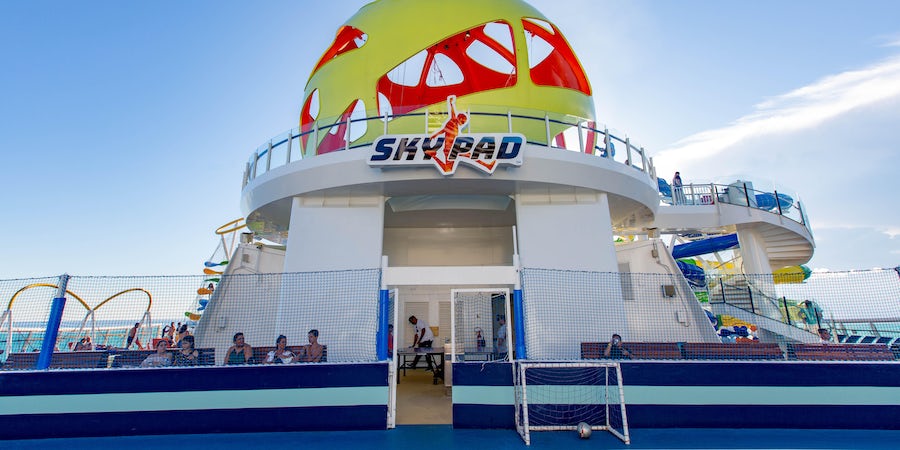 Sky Pad on Mariner of the Seas (Photo: Cruise Critic)

Sky Pad on Mariner of the Seas (Photo: Cruise Critic)

(4:04 p.m. EDT) -- Royal Caribbean recently closed its Sky Pad after a man was severely injured in an accident on the top-deck trampoline. It hasn't announced if it plans to reopen the high-profile attraction.

, which is found on Independence of the Seas and Mariner of the Seas, has been described as a thrill ride experience that combines trampolines with bungee jumping and virtual reality.According to

, passenger Casey Holladay filed a federal lawsuit last month in Miami, suing the cruise line for $10 million. The suit claims that during a February cruise, he was trying Sky Pad when the ride's bungee cords snapped him 20 feet back to the ground, breaking his pelvis and causing permanent injuries.The ride, which was open to all passengers ages 5 and up, closed after the lawsuit was filed.

that the ride was shuttered as part of a review and the line's commitment to safety.Cruise Critic reached out to Royal Caribbean to confirm the closing and to determine when or if the attraction will reopen, but at press time had not received a reply.SkyPad was installed last year as part of upgrades to

Mariner of the Seas

Independence of the Seas

. The experience has also been installed on Royal Caribbean's newest ship, Spectrum of the Seas, which leaves on its inaugural cruise next week. The line

that it's uncertain if the attraction will be operating.Located inside a large yellow sphere on the ship's top deck, Sky Pad has four trampolines, all rigged to a combination of bungee cords and virtual reality. (The bungee aspect refers to the type of ropes used, allowing for extra lift -- not bungee jumping off the side of the ship). Once inside, participants bounce on the trampolines with the aid of the cords, all while exploring virtual reality worlds through VR headsets.