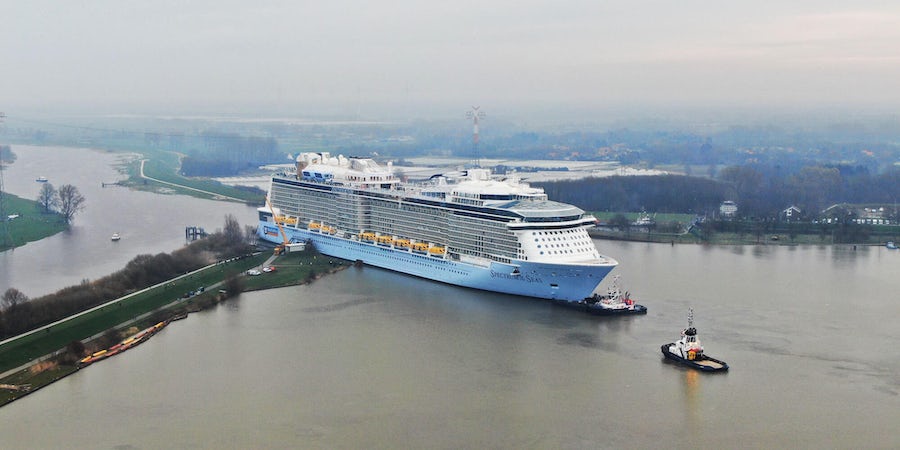 Spectrum of the Seas on its conveyance up the Ems River. (Photo: Royal Caribbean International)

Spectrum of the Seas on its conveyance up the Ems River. (Photo: Royal Caribbean International)

The ship will be based year-round in China, homeporting in Shanghai from June 2019.

Michael Bayley said: "We are excited to welcome Spectrum of the Seas, our first Quantum Ultra-class ship, to the Royal Caribbean family.

"We have once again combined revolutionary ship design with the latest technologies to deliver a ship that will redefine the China cruise market. We are excited for our guests to make amazing family memories."

The ship includes the line's first-ever all-suite complex -- accessed via a keycard using a private elevator -- plus the two-story, 1,134-square-foot Ultimate Family Suite, which debuted on Symphony of the Seas in 2018.

New dining options include specialty restaurant Sichuan Red, the Leaf and Bean traditional tea room, and Wonderland's Dadong, designed by Chinese chef Dong Zhenxiang. There will be one main dining room, rather than the four separate dining rooms found on ships like Ovation of the Seas.

Fun features also include the North Star (a pod that extends up over the ship for 360-degree views), which was pioneered on the line's Quantum-class ships, and SkyPad, a bungee trampoline that sees passengers wear virtual reality headsets while jumping.

The ship will begin its maiden voyage from Barcelona on April 18, arriving in Singapore on May 17. From there, it will offer two short sailings before relocating to Shanghai.