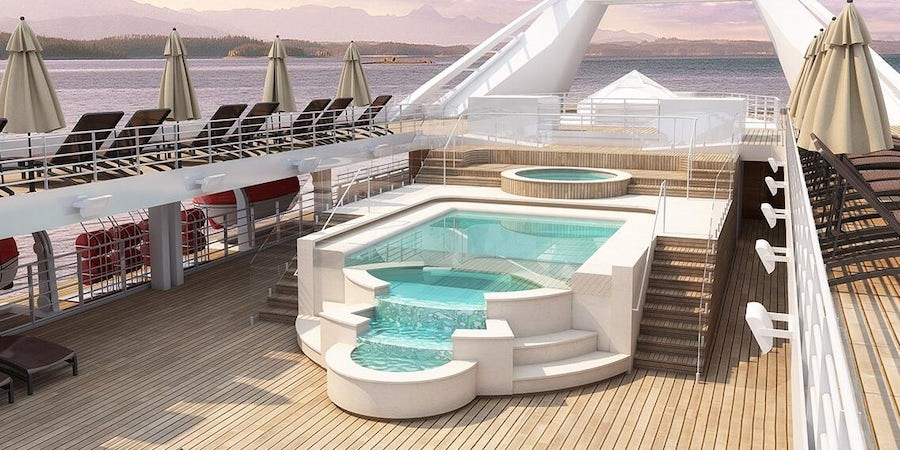 (5 p.m. EDT) -- One week after the first steel was cut to kick off Windstar Cruises' $250 million expansion program, the line today shared a first look at the new public spaces and suites that will debut on its three Star-class ships, during a press conference held at the 35th annual Seatrade cruise conference in Miami Beach. The all-new renderings show what popular spaces throughout Star Breeze, Star Legend and Star Pride will look like, after the ships are stretched, renovated and re-engined. The line also unveiled the post-dry dock deck plans, which can be viewed on

."This is the biggest investment and expansion in Windstar Cruises' history," said Windstar's president, John Delaney.  "The investment ensures to our loyal and future guests, and industry partners, that these ships will continue to sail for generations and deliver on their promise of visiting the smaller ports and waters of the world that our brand is known for."To extend each ship, new midsections are being built at Fincantieri's shipyards in Trieste, Italy -- starting with Star Breeze, the first of the trio to be overhauled -- Cruise Critic previously reported.{#widget:image|decorators:article_image|image:133205|title:Windstar's Star Suite balcony cabin is set to debut on the refurbished Star-class cruise ships (Image: Windstar Cruises) |description:Windstar's Star Suite balcony cabin is set to debut on the refurbished Star-class cruise ships (Image: Windstar Cruises) #}The ships will be stretched by approximately 82 feet, enough to add 50 additional cabins, bringing each ship's capacity to 312 guests (plus additional crew quarters to maintain a 1.5-to-1 crew-to-passenger ratio). The beam (width) will remain 63 feet, allowing the ships to continue to navigate the Kiel and Corinth Canals and access smaller ports like Sanary-sur-Mer and Isla Parida that are off-limits to most cruise ships.Ten new cabins will be created on Deck 3, where there were none previously; these are classified as porthole cabins. The two Classic Suites found on Deck 6 are being expanded to create two additional Owner's Suites, which can be connected to two adjacent cabins to create a Grand Owner's Suite. These three-bedroom suites will encompass 1,374 square feet and offer separate dining and living room areas, an entertainment bar, a large central balcony and an additional French balcony in one of the bedrooms. The smallest cabins on the revamped ships will remain 277 square feet, a majority of which will continue to have French balconies.  Windstar's renovations also will extend the main dining room, AmphorA, and will add an alternative restaurant. The ships' al fresco barbeque space will be expanded, resulting in an additional casual poolside dining option; the pool deck also will see a larger pool and hot tub. A new elevator will be added mid-ship, while the spa and fitness center will be enhanced and expanded. {#widget:image|decorators:article_image|image:133208|title:Dining room on the refurbished Star-class ships (Image: Windstar Cruises)|description:Dining room on the refurbished Star-class ships (Image: Windstar Cruises)#}In terms of mechanical updates, the ships will receive new fuel-efficient engines that will reduce emissions. Other additions will include new tender boats and an expanded tender boarding area.Star Breeze will emerge from dry dock on February 20, 2020 for a 10-night sailing from Barcelona to Lisbon. Next up for the stretching will be Star Legend, which is scheduled to re-launch in July 2020, while Star Pride will come out of dry dock in November 2020. The inaugural sailings of Star Breeze and Star Legend are already open for booking.