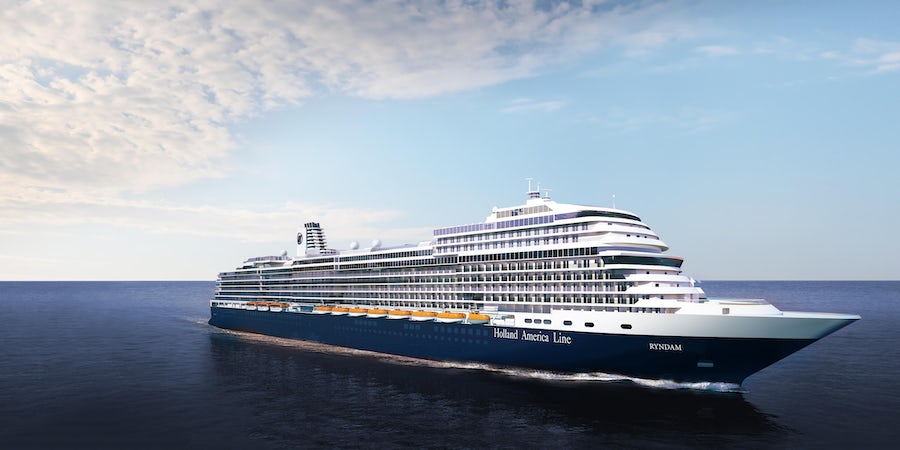 (5:30 p.m. EDT) -- The name of Holland America's next new ship will be Ryndam, the line revealed today at a media luncheon and tour held onboard Nieuw Statendam, to kick off the 35th annual Seatrade cruise conference in Miami Beach.

The third Pinnacle-class ship -- a sister to Nieuw Statendam and Koningsdam -- is slated to launch in May 2021. It will have a passenger capacity of 2,662 and feature a design similar to that of its sister ships, with a few tweaks, Holland America's president Orlando Ashford hinted during the announcement.

"Holland America Line honors the timeless tradition of cruising while also embracing new innovations for today's travelers, and the name Ryndam_ _reflects the unique history of this company while honoring previous ships that were progressive in their time as this last Ryndam will be," Ashford said.

"From the first Ryndam more than 100 years ago to the most recent, the namesake ships have been beloved by our guests. The next Ryndam will bring new life to one of the most notable series of vessels in our history."

Construction on Ryndam began in March 2019, when steel for the ship's main section was cut at Fincantieri's Marghera shipyard in Venice, Italy. Details of what will set the ship apart from its sisters, as well as where it will sail, will be revealed at a later date.

Also during the luncheon and tour, Cruise Critic and other media were treated to a sneak peek of the line's new production show, Step One, which debuted on Nieuw Statendam on December 1, 2018.

The show, which incorporates dance routines to modern tunes with special effects on background LED screens, is one of a few new productions that will be available on select cruises and ships. Ashford said the new productions aim to steer away from traditional Vegas-style cruise ship shows.