You may also like
Dismiss
Coronavirus: Updated Cruise Ship Policies and Cancellations Because of COVID-19 (2021)
What Happens to Cruise Ships During the Pandemic's Hurricane Season?
Cruising the Newest Ship Afloat: Live From Celebrity Apex
Live From Royal Caribbean's Odyssey of the Seas: Why You'll Never Be Bored on This Cruise Ship
Royal Caribbean's Odyssey of The Seas Cruise Ship Officially Christened
NCL Reveals More Dining, Design Details on New Cruise Ships Norwegian Prima and Norwegian Viva
Are Cruise Lines Increasing Gratuities in 2023?
Royal Caribbean Starts Construction On New Utopia Of The Seas Cruise Ship
Live from Grandeur of the Seas: The Beloved Lady G Cruise Ship Still Reigns
Just Back From Allure of The Seas' Maiden Galveston Sailing: Hits and Misses 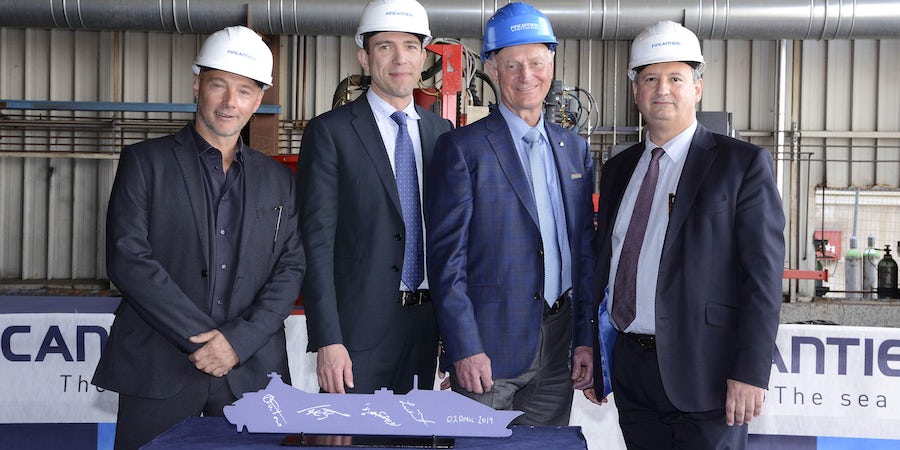 (2:00 p.m. EDT) -- The first step in Windstar Cruises' $250 million revitalization program took place today as steel was cut for the new mid-body section that will be inserted into Star Breeze -- the first of three ships scheduled to undergo stretching as well as extensive redesigns and mechanical upgrades.

During a ceremony held at Fincantieri's shipyard in Trieste, Italy, Windstar's vice president of expansion projects, John Gunner, pushed a button that activated a torch, which made the first cut in the steel. The new sections will be built in Trieste and then transported to Fincantieri's Sicily-based shipyard, where they will be inserted into the line's three Star-class ships -- including Star Breeze's sisters Star Legend and Star Pride -- during their respective dry docks.

In addition to the insertion of the new sections, which will bring the passenger count from 212 to 312, the ships will be revitalized with a new modern design while introducing all-new suites and public spaces. They also will receive new environmentally friendly engines that will reduce emissions and provide greater fuel efficiency.

"This is not about just cutting a ship in half and making it bigger," Gunner said. "We are replacing the engines and 'back of house' too, so that these ships deliver on their promise of visiting smaller ports and special waterways of the world with a softer environmental footprint for generations to come."

Star Breeze will emerge from dry dock in spring 2020, sailing its post-dry dock inaugural cruise on March 20 from Miami to Colon, Panama. The sailing marks the line's first-ever departure from Miami.

Next to receive the changes will be Star Legend, which is scheduled to re-launch in July 2020. Star Pride will follow, entering dry dock in the fall and resuming service in November 2020.

The inaugural sailings of Star Breeze and Star Legend, which are open for booking, together will visit the Panama Canal and Costa Rica, Mexico, Alaska, Iceland, the Greek Islands, the Holy Land and the Mediterranean, among other destinations.