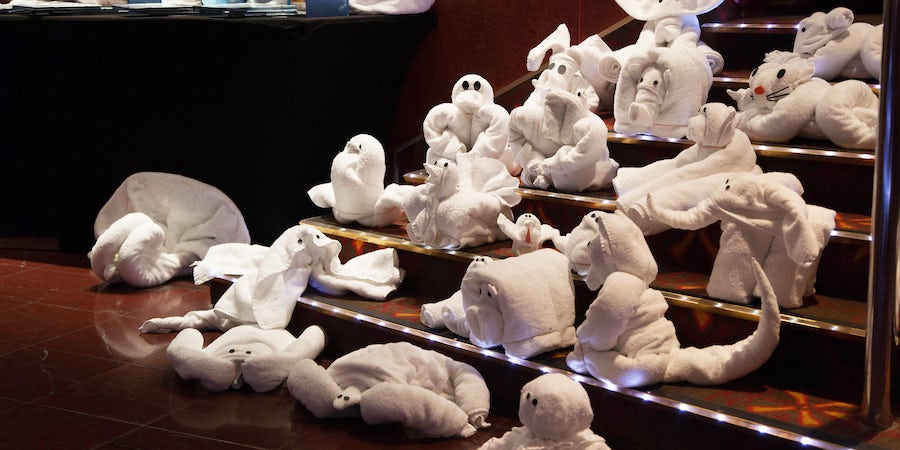 Norwegian Cruise Line to Eliminate Towel Animals on Some Ships, Cut Back on Others

(2:10 p.m. EDT) -- Norwegian Cruise Line will no longer feature towel animals on some of its ships and will reduce the number created on others, saying the change is part of its mission to be "a responsible corporate citizen" by using fewer resources to clean the cloths.

Norwegian has not yet replied to a request for further information about which ships will be adopting these policies and when they will go into effect.

"We are committed to being a responsible corporate citizen by fostering a culture of awareness and respect for our world's resources," the line said in a statement. "Our mission is to continually improve our sustainability culture through fresh innovation, progressive education and open collaboration.

"As such, from time to time, we explore opportunities to expand our efforts. In this instance, we are assessing the impact of reducing the number of towel animals we showcase aboard a few of our ships. We understand that many of our guests enjoy them as part of the experience of cruising with us, so towel animals remain available upon request."

The issue came to light in late March on Cruise Critic's message boards when member banjineer said he had not seen towel animals onboard Norwegian Star. He updated the post to say he's spoken to the ship's Hotel Director and, effective March 23, 2019, there would be no more towel animals onboard.

Some Cruise Critic members decried the change, calling it another way for the line to increase profits while reducing passenger services.

"So NCL saves another nickel and dime by taking away another beloved tradition on a cruise," wrote member Love my butler. "Stripping us of our towel animals in the name of conservation.".

"I guess we shoulda seen it coming after the pillow-top mints went away about 10 (or more?) years ago," said Greenpea2. "Maybe next they will replace lounge chairs with rubber mats. Or no more than one pillow per person in a cabin! The possibilities on that list are many."

Others members like rhblake noted that discontinuing towel animals does make sense from an environmental standpoint, as all Norwegian ships have at least 1,000 cabins, and a minimum of two towels are needed to craft an animal.

That the line will continue to make towel animals upon request was good news for cruisers like AKR2011, who posted that the towel animals were always a happy reminder that she and her husband were on vacation.

"My husband always makes a point to talk to our steward on the first day and let them know how much I love the towel animals," AKR2011 said. "He slips them a tip right off the bat as he explains this. Then I always leave an extra tip at the end. I know this all may sound silly, but Towel Animals are a very special part of our NCL experience."

This is the latest in a series of cruise industry initiatives aimed at making cruise ships more environmentally friendly. Many lines have eliminated plastic straws and single-use plastics from their ships.  Others have invested in more fuel efficient engines, the use of solar energy and equipment to reuse water.

For a more complete list of environmentally friendly initiatives, check out our article on green cruising.