You may also like
Dismiss
Coronavirus: Updated Cruise Ship Policies and Cancellations Because of COVID-19 (2021)
Rolling Out the Deals: Why Now Might Be a Great Time to Book a Cruise
Cruising the Newest Ship Afloat: Live From Celebrity Apex
Live From Royal Caribbean's Odyssey of the Seas: Why You'll Never Be Bored on This Cruise Ship
Disney Wish To Feature New Onboard Entertainment Firsts from Disney Cruise Line
Royal Caribbean Unveils New Entertainment Line Up on World's Biggest Ship, Wonder of the Seas
NCL Reveals More Dining, Design Details on New Cruise Ships Norwegian Prima and Norwegian Viva
These Ships Are Coming Back To The U.S. in 2022: Here’s Why You Should Care
Live from Grandeur of the Seas: The Beloved Lady G Cruise Ship Still Reigns
Just Back From Allure of The Seas' Maiden Galveston Sailing: Hits and Misses 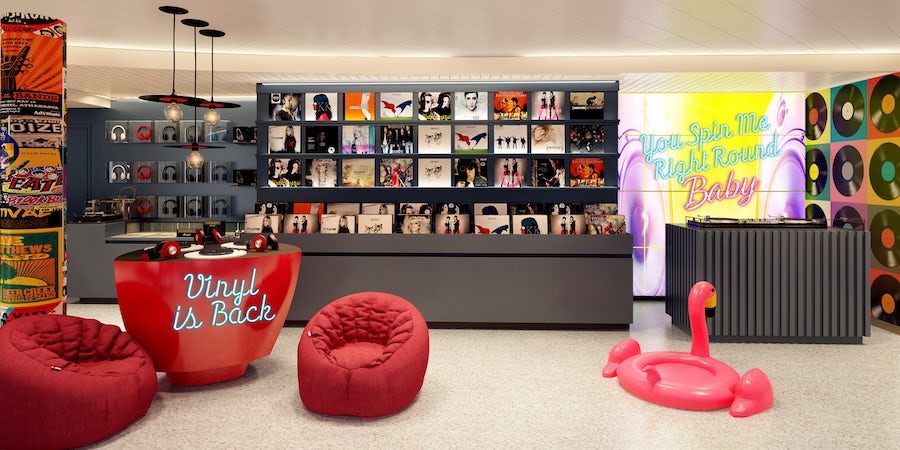 (9 a.m. EDT) -- Building upon its already eclectic lineup of entertainment, Virgin Voyages will unveil a record shop and a Japanese-style karaoke room on its new ship set to launch in spring 2020.

Voyage Vinyl will feature music from various eras and genres, which passengers can enjoy through personal listening stations, as well as a space for live DJ sets by Virgin Voyages' guest DJs. Limited-edition vinyl collections will include playlists by the resident guest DJs. The line also revealed multiplatinum DJ MK (Marc Kinchen) and Grammy-nominated duo Sofi Tukker will join previously announced DJs Mark Ronson and Boy George, all of whom will offer occasional exclusive performances on the pool or in port.

Passengers who wish to put on their own performances will have the option to book The Groupie, a karaoke, gaming and movie lounge. The studio puts a modern twist on Japanese karaoke rooms, which traditionally are small, private social spaces equipped with a karaoke player and microphones.

In addition to the new spaces, Virgin Voyages has teamed up with White Label Creative, a UK-based musical events agency, to develop the background music soundtrack for the ship and the line's private Bahamas beach venue, The Beach Club at Bimini. Virgin Voyages said there will be an emphasis on electronic music but other genres, including classical, also would be incorporated.

Virgin Voyages' first ship, Scarlet Lady, is scheduled to begin sailing from Miami in April 2020. It will be adults-only (18 and older) and feature a "vitamin sea" concept, which focuses on passenger wellness, relaxation and fun. Public spaces will include a tattoo studio, outdoor fitness center and extensive spa facilities. Cruise fares will cover gratuities, including on alcoholic drinks (most non-alcoholic drinks are complimentary) and spa treatments.