You may also like
Dismiss
Norwegian, Royal Caribbean Team Up To Create Cruise Health and Safety Protocols
Rolling Out the Deals: Why Now Might Be a Great Time to Book a Cruise
Live From MSC Cruises' MSC Grandiosa: What's it Like Sailing on a Big Ship in the COVID Era?
Australia Extends Ban on Cruises to March 17, 2021
P&O Cruises Restarts Cruising For First Time in 15 Months on Britannia
Additional Cruise Lines Opt To Require COVID-19 Boosters
Australian Cruise Industry Welcomes Talks with Government as Restart Date Pushed Back Again
Carnival and Royal Caribbean Cruise Lines Reinstate Smoking in Casinos
Disney Wish To Feature New Onboard Entertainment Firsts from Disney Cruise Line
Live from Grandeur of the Seas: The Beloved Lady G Cruise Ship Still Reigns 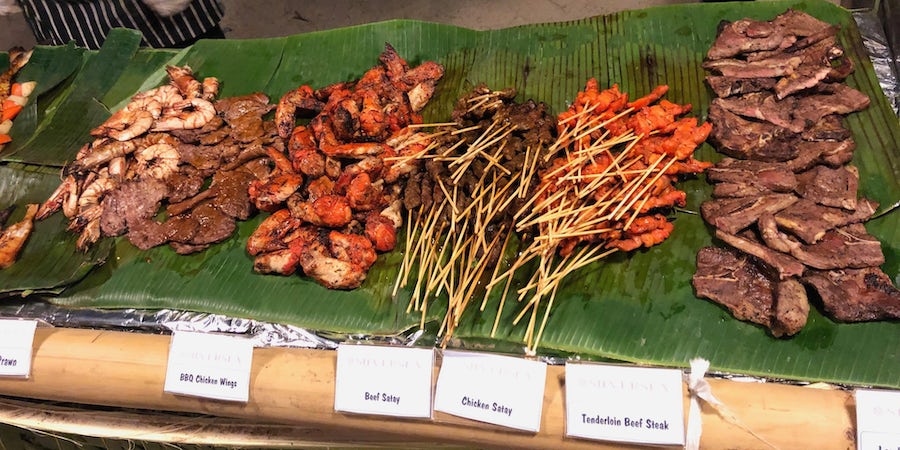 (9:50 a.m. EDT) -- Silversea Cruises is testing out a brand-new culinary concept which it has dubbed S.A.L.T. (or Sea And Land Taste), which will launch on its next ship, Silver Moon, next August.

Former Editor-in-Chief of foodie bible Saveur Adam Sachs, oversees the ambitious new concept, which pulls together a combination of food experts, leading chefs, restaurant critics and local tour guides at each port. The program continues onboard with lectures, talks, cooking demos and hands-on cooking, all designed to give passengers a deep and rich taste of each country they are visiting.

The program is ambitious and goes far beyond adding simple excursions. The new ship will be completely restructured to accommodate some of the new S.A.L.T-related culinary spaces. The classes and excursions allow passengers to get their hands dirty: chopping, slicing, stirring and creating their culinary masterpieces either in port or onboard.

"Do we really want to travel in hermetically sealed popemobiles through the rural provinces of France, Mexico and the Far East, eating only in Hard Rock Cafes and McDonalds? Or do we want to eat without fear, tearing into the local stew, the humble taqueria's mystery meat, the sincerely offered gift of a lightly grilled fish head? I know what I want. I want it all. I want to try everything once." -- Anthony Bourdain, Kitchen Confidential: Adventures in the Culinary Underbelly

There is a night market in Kota Kinabalu, Malaysia where you'll find grilled chicken butts -- a local delicacy, of course -- on skewers: "Haha, chicken asses for you!", the girl said as she passed us the skewers.

We chomped down on them. We gagged; Adam Sachs ate them with relish. Like Bourdain, who had signed a contract with Silversea as part of the S.A.L.T. Program just before he died, we'll try everything once, but we will also reserve the right to never try it again. No more chicken butts.

And that kind of gets to the heart of S.A.L.T., as Barbara Muckermann, Silversea's Chief Marketing Officer and the driving force behind this new program, explains:

"We're not expecting the whole ship to do the weird stuff that Adam (Sachs) will have you experiencing in the next few days, because not everybody is about that.... five to 10 percent of the ship will be in the S.A.L.T. Lab, trying to understand and learn so much more about the food.

"When it makes sense there will always be S.A.L.T. excursions, and they will be available for any guest that is interested."

For a price, although the cost of the excursions has yet to be determined. Muckermann said there would be a nominal fee for the S.A.L.T. Lab, purely to control numbers, probably around $30 per person.

The line toyed with the idea of getting a chef to curate the program, but Muckermann felt that however much the chef might know a cuisine, it would "always be from their point of view." Hence hiring Sachs, who is able to give a wide-screen approach to food and food culture from his years writing, editing and travelling:

"This is about telling a story," he explains. "It's about finding a narrative, a thread that runs between these different destinations through food.

"Whether that's through trade routes, colonisation, food influences or specific types of foods cooked in different ways on different islands.

"My role is to curate those experiences for guests, whether that's on shore experiences, through presentations or cooking demos."

If Sachs doesn't know the person on the ground, he will know someone who knows someone who knows someone -- "Two degrees of Bourdain," as he puts it. That might be a food writer like Nicole Ponseca, whose book "I Am a Filipino -- and This is How We Cook" was named Best Cook Book of the Year by the New Yorker, Boston Globe, LA Times Book Review and a number of others; or Annette Tan, the leading authority on Singapore cuisine and founder of supper club FatFuku (translation Fat Luck) -- or Clang Garcia, who took us to a Barangay village in Coron to meet the locals and sample their food -- one of the highlights.

The aim of the program is not just take you to a local restaurant to eat local food -- it's about being taken to meet the people who harvest the food, to the market where you can buy the food, to a hotel where you prepare the food, bashing turmeric or lemongrass to create that dish yourself, before eating it at lunch.

Back on the ship, you listen to Nicole do a deep dive into Filipino politics, history and cuisine (who knew that street snacks are so heavily influenced by America that some dishes are steamed in 7-Up?), before she signs her best-selling cookbook for you. Over dinner, she'll talk with you about the evolution of Filipino cuisine in the US (of course, it depends on the chef; this won't necessarily be included as part of the S.A.L.T. experience). It's a whole new level, and something unique in the industry.

The challenge with these super-authentic excursions, especially to small villages that aren't used to seeing any tourists, is that they won't be super-authentic for long if huge tour groups visit every week.

Our observation is that the size of the ships, and the fact they are not calling in to places like Coron every week will ensure that a balance is maintained. That pursuit of authenticity, while not ruining the delicate eco-system -- the very thing passengers have come to experience -- is a tricky balancing act, but Silversea is mindful of that.

"At Silversea, we don't feel luxury is about adding a new restaurant or adding a new champagne bar. It's not just about food, it's about understanding food and we feel our role as a travel brand is to give that context to explain a destination."

However, Muckermann and Sachs are absolutely clear these excursions will not be for everyone both in terms of theme, but also ability. Trekking through rice paddies, jumping across boats, taking a bumpy Jeepney (the main mode of transport in Manila), climbing up steep steps to a freshwater lake -- many of these are strenuous even for Gen Xers.

Silver Moon will be fitted with a S.A.L.T. Kitchen, S.A.L.T. Bar and S.A.L.T. Lab -- a test kitchen/demo area where passengers can participate in the creations. It will be Med-based, before repositioning to the Caribbean, so these experiences we are having will not be immediately available onboard. They may appear on Silver Dawn, however, and if the program is a success, on Silver Muse and Spirit (the ships may eventually be retrofitted to add the S.A.L.T. restaurants if the program is a success).

"The challenge with the Mediterranean is finding authentic experiences that people have not done before," Sachs said. "People have made pasta before, so perhaps this is about finding the only place near Rome that makes a particular type of pasta."

It's rare to find an experience that truly captures a country, in a pure, unspoiled way. Being met by a line of smiling kids on a jetty, who lead you to what passes as a village hall (more a corrugated iron structure), where foods are laid out for us to sample, before we are treated to a dance by the village elders, may or may not appear on the final program.

But Sachs says it's the essence of this program. "This is more about giving people a taste and a sense and a feel of what to expect," explains Sachs. "We're seeing what works and what doesn't. The S.A.L.T. Program is for people who want to see the real deal."