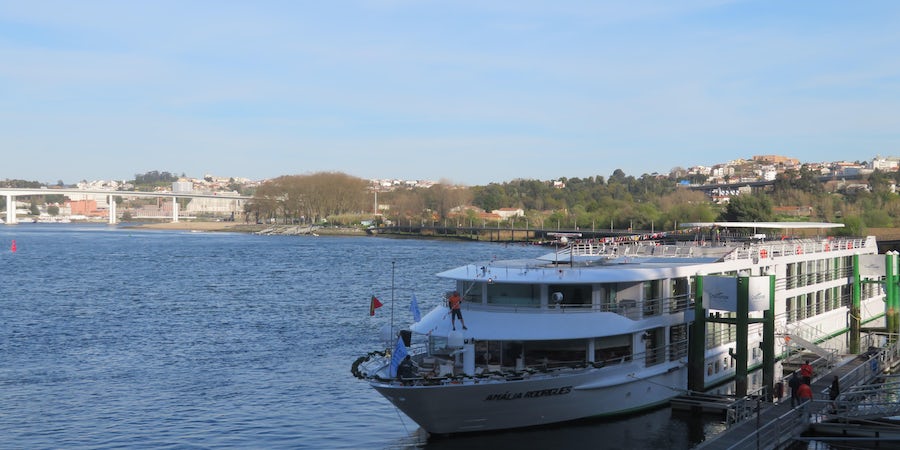 The new ship enables the family-owned company to increase annual passenger capacity in Portugal to 25,000.

More than 150 guests and local civic dignitaries gathered on the sunny quayside in Porto to watch three generations of the Schmitter family launch the 132-passenger Amalia Rodrigues, named after the Portuguese "Queen of fado" who popularised the maritime musical genre that originated in the seafaring capital Lisbon in the 1820s.

The traditional bottle of Champagne was broken across the ship's bow by Maria Alexandrina, director of the Amalia Rodrigues Foundation, which preserves the legacy of the famous singer who died 20 years ago in 1999.

In a break with convention, CroisiEurope also has a godfather for all of its ships; in this instance Marco Martins, the mayor of Gondomar, a town near Porto where the line moors its Douro fleet in winter.

During the ceremony there was a live performance of "The Song of the Sea”, one of the best-known fado compositions and once sung by Amalia Rodrigues.

Lucas Schmitter, grand-nephew of the company founder, said: "This is a symbolic day. In 2002 we started on the Douro with our first ship Vasco de Gama and felt there was tourism potential in this beautiful region. We are very happy to celebrate the arrival of our sixth ship which will enable us to bring 25,000 passengers to the Douro each year. It is named in honour of Amalia Rodrigues who popularised fado worldwide."

The 262-foot Amalia Rodrigues has 66 cabins -- including one that is wheelchair accessible -- ranging in size from 129 square feet to the two suites which measure 204 square feet. Unusually for a river ship, all beds face the river. The vessel also boasts the fleet's trademark bright and modern decor, and amenities include a swimming pool on the sun deck.

The new ship will sail five- and seven-night round-trip English-speaking cruises from Porto.