You may also like
Dismiss
Just Back From The 80s Cruise: Talking Cruise With Musical Icon Sheila E.
Impractical Jokers Cruise, Round 4: A Chat With Joe, Murr and Sal
New Series of "Cruising With Jane McDonald" Confirmed
The Jane McDonald Interview: On Cruising, Touring and What Ship She'd Like to Sail on Next
Q & A With Vanna White, Godmother of Carnival Cruise Line's Newest Ship, Carnival Panorama
Q&A With Seth Rudetsky of Seth's Big Fat Broadway Cruises
Royal Caribbean Chair Talks Protocols, Panel and Return to Sea
Cruising During COVID-19: Do You Tell Your Friends and Family You're Onboard?
Holland America Line Honcho: Greece Restart News, Alaska Optimism, CDC Movement and More
"Getting the Flywheel Moving:" Royal Caribbean Group President Richard Fain Talks U.S. Cruise Restart 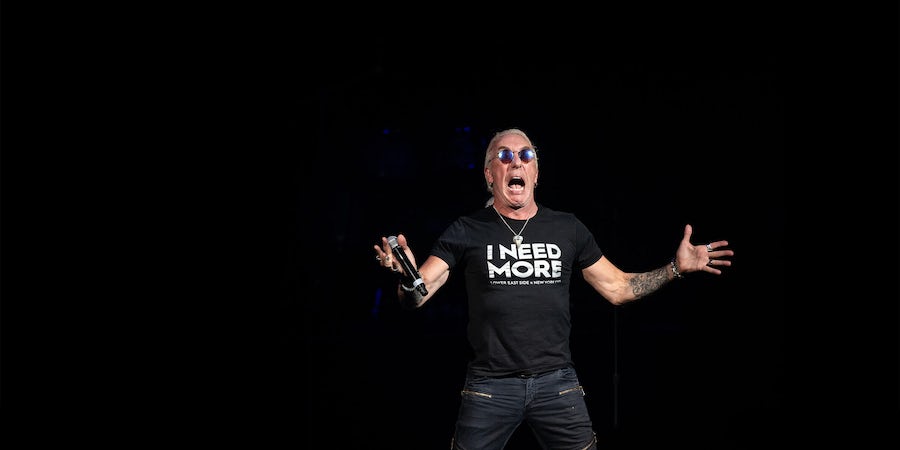 Just Back From The 80s Cruise: Talking Cruise With Rock Star Dee Snider

While onboard, we sat down with cruise host and heavy metal musical icon Dee Snider, whose "I Wanna Rock" motto from his time with the band Twisted Sister continues to inspire. Here's what he had to say about cruising -- and where he wants to go next.

Cruise Critic: Let's get this started. Have you gone on a cruise before?

Dee Snider: Never been on a cruise, and I swore I never would, and I just, to me, the idea of being on a cruise was the most horrible thing in the world.

DS: The idea of being trapped, like in a building where you can't go out the doors for a period of time. My wife and I had done something very, very small. We were living in Florida years ago, and very incognito, we took a boat over to Freeport Island, and it was just like, took several hours on a cruise-type boat. We just looked at each other and said, "No, this is not for us."

Then an opportunity came, and I broke my solemn vow, and I'm glad I did because it was really way more comfortable than I thought it would be. For those who fear cruising, if you want to be in the thick of things, you want to be part of a group experience, it's there. But if you want to find your space, and you want a place to sit ... you want to just chill or whatever, that's there, too. It's not like the entire boat is just overrun with people. You have options, and that's the great thing about it.

CC: What have you liked about the fan interaction on this cruise? How has that been for you compared to the way it might be on land?

DS: I do a lot of convention appearances; I'm used to that one-on-one thing there, but the spirit of the cruisers here … They're right out of the gate. It's like there's no warming up, there's no "I gotta ease into this." It's just bam, shot out of a cannon, and there's a great camaraderie amongst the people on the cruise.

My first convention was with some very big rock and roll stars. We were all sitting together, and they wouldn't look at the fans, they wouldn't shake their hands. They wouldn't greet them. They had their security standing, like pushing things out of the way, taking cameras, the whole thing. I just watched it and I saw the disappointment in the fans' faces and I said, "I'm not gonna be that guy."

I've had some really wonderful little stories from fans come out along the way of what my music and my career and the things I've done and meant to people. You see the reaction in concert, but you don't realize how it's touching people on an individual basis.

CC: Any stories like that have come out yet from this cruise?

DS: So many. Everybody's like, "Can I just tell you a story?" One guy came up to me and he said a year ago, he was diagnosed with cancer, and he beat it. He says, "And I was using your records as inspiration nonstop." He says, "I'm here one year later and I'm cancer free, and I'm here on this cruise." I hugged him. I was like, "That's ... you have no idea." That touches me so much to realize your words mean something to people beyond ... I mean I was pissed off at my father when I wrote "We're Not Going to Take It", so ...

CC: It's nice to know that your thoughts have this greater impact. How did you get involved with this cruise and decide to do it?

DS: It was Deb Gibson.

DS: Yes, we are friends. We both grew up on Long Island. We didn't know each other; she's much younger than me. Actually, she denies this story, but I caught her looking over the fence at my house … We have since become friends over the years and really got closer on "Celebrity Apprentice," really sort of bonded during that time.

Anyway, she's done these things, and I heard that she did this one, and so when I got the offer, I called her up and I said, "What do you think? Here are my fears." She said, "It was great." I've met so many people over time including Terri (Nunn) of Berlin and Alan Hunter, who said, "I will never do one of those things," and then they did one, and now it's like a thing. They love doing it.

CC: Cruising can hook you.

DS: Apparently so. I know family, friends who this is what they do. They like going. I sort of pre-judged the cruise thing and now I've been taught a lesson.

CC: As we like to say at our website, "There's a cruise for everyone."… You're a traveler. You've obviously been around the world for your concerts. Where are places that you still want to travel, and would you consider a cruise for any of those?

DS: One cruise that I've been thinking about are some of these high-end, small boat cruises that take you to exotic places where you can see things like icebergs and whales. Also, the Galapagos Islands. That's on our bucket list. Egypt, I had friends who did a river cruise going up the Nile on one of these more boutique-y kind of ships. My wife and I wanna go there, so there's two places that we would like to do the boat thing.

Another river cruise that sort of caught our attention ... the one that stops in Budapest.

DS: The Danube! I hear that's like a pretty great cruise with such amazing cities that are all connected by art and music.

CC Is there anything that you've done on the ship that you've really enjoyed, and has been special to you that's not been fan-related?

DS: Sex is too easy, right? You can write that down.

DS: It's lovely talking to you. Get ready to rock!

The next 80s Cruise takes place March 8 - 15, 2020, as an all-inclusive sailing on Explorer of the Seas. Bands announced so far include the B-52s; Berlin; Patty Smyth of Scandal; Tony Hadley of Spandau Ballet; Tony Lewis of The Outfield; Asia; Big Country; the Motels; Lita Ford; Bow Wow Wow and more. Go to The80scruise.com for more information.