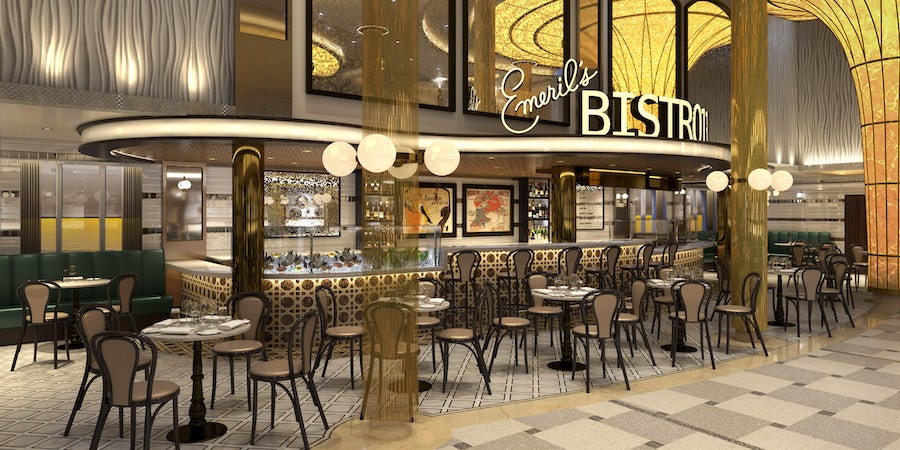 (11:30 a.m. EST) -- Carnival Cruise Line is kicking it up a notch (wink) with the debut of Emeril's Bistro 1396, a Creole restaurant helmed by Chef Emeril Lagasse that's coming to the aptly named Mardi Gras, launching summer 2020.

Known by just his first name, Emeril has garnered a reputation for his Cajun cuisine through a series of TV shows and restaurants carrying his moniker.

"He's Mister New Orleans. Everybody loves him," Carnival Cruise Line president Christine Duffy told Cruise Critic, adding she doesn't know why Carnival hasn't partnered with him before since he's as much about choosing fun, and being laid-back and friendly as Carnival is.

"When we knew we were going to name the first XL ship Mardi Gras and started talking about the New Orleans zone, we knew we had to have an Emeril restaurant."

The venue will offer bar, booth and table seating in a "refined, elegant and engaging" atmosphere.

Emeril's Bistro 1396 will be located in the ship's French Quarter -- modeled after the famous district in New Orleans -- one of six themed zones onboard. Along with bars and restaurants that aim to capture the spirit of the Big Easy, the French Quarter will also feature live jazz performances. The "1396" in the name of the venue comes from Mardi Gras' hull number at the Meyer Turku shipyard in Finland where the ship is currently being built.

"I've developed restaurants all over the country, but to create my first restaurant at sea – on a ship named Mardi Gras with its own French Quarter, no less – was an opportunity I simply could not pass up," said Lagasse in a news release. "I'm excited to be a part of this brand-new ship and bring a taste of the flavors of New Orleans cuisine to the guests sailing on Mardi Gras."

Carnival's Mardi Gras is scheduled to enter service on August 31, 2020 in Europe before repositioning to New York and ultimately Port Canaveral for year-round seven-night Caribbean cruises commencing October 2020. In addition to the zone concept, Mardi Gras will feature the first-ever roller coaster at sea. The Bolt coaster will provide nearly 800 feet of twists, turns and drops and will be capable of reaching speeds of close to 40 miles per hour.