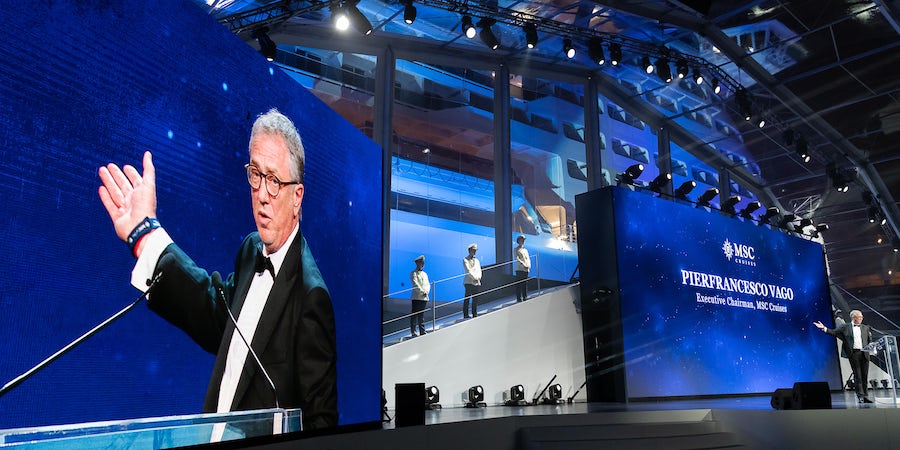 Pierfrancesco Vago at the Naming Ceremony for MSC Bellissima

Pierfrancesco Vago at the Naming Ceremony for MSC Bellissima

MSC Bellissima, MSC Cruises' 14th ship and the second in the Meraviglia class, bears much of the essential DNA of its elder sibling (which, incidentally, won Best New Ship in the Editors' Picks Awards 2017) -- but with a few tweaks.

The 4,500-passenger ship, which was handed over to the line last week and christened at the French shipyard where it was built, made its UK debut in Southampton on Friday.

Saturday saw a huge event -- Storm Freya notwithstanding -- where it was officially named by the godmother to every MSC ship, Sophia Loren. Today, it headed south to Genoa, where it will homeport until December 2019.

We got onboard MSC Bellissima to find out what's new, what works and what we predict will reappear on the line's future ships.

The Michelin-starred, Barcelona-based chef started out his relationship with MSC by creating a few signature dishes for the gala dinner across the fleet. Then he launched his own restaurant, Ocean Cay, on MSC Seaview, which we had high hopes for, but were deeply underwhelmed by the overly-fussy dishes. We were hoping he wouldn't do the same here. He hasn't. We're happy to say that the tapas selection is top notch. He's kept many of the classics such as croquetas and tortilla exactly as they should be served; and then added a few twists, such as the patatas bravas (spicy potatoes), which come in hollowed out tiny roast potatoes with a dollop of mayo mixed with the spicy sauce. He described the spot -- which sits where Eataly is on the main promenade on Meraviglia -- as "the spirit of Spain" -- and revealed we will see a second HOLA! Tapas on the next ship, MSC Grandiosa, as well as replacing Eataly on Meraviglia.

Restaurants without their own space, ones which are basically a collection of chairs and tables on a landing, do not generally work, certainly in terms of atmosphere. Which is why we were pleased to see this French bistro from MSC Seaview get its own space on the main promenade of Bellissima, again where the second branch of Eataly is on Meraviglia. It feels "bistro-y", with a wrought-iron bar on one side, with lots of French liquers stacked in front of a mirror at the back; one of those very French-style chalkboards in front of the restaurant with the menu du jour scribbled on, and back inside banquette-style seating. We didn't eat there, so can't comment on the food, but in terms of décor we predict a hit.

The acclaimed French chef joins MSC's increasingly Michelin starry roster of top chefs to forge a partnership with the line. Raymond will start out with a signature dish in the Yacht Club, then graduate to an as yet unnamed dish for the gala menu and then…? Well, see above. We think it's just a matter of time before he gets his own (French) restaurant onboard.

MSC Bellissima heralded the arrival of a first-at-sea -- a voice-enabled, artificial intelligence, personal assistant called Zoe, installed in every single cabin. The idea behind it (or she), is to answer those simple questions that many cruisers have at the start of a cruise right then and there in your cabin, rather than having to go to guest services and stand in line. Unfortunately, we couldn't try her out as she wasn't programmed while in port (but we are back on in May and will test her then).

Zoe is part of the line's bigger technology push: MSC for Me, which seems to work well for the most part, including touchscreens dotted around the ship that allow you to pull up information on what's happening onboard.

One gripe we have, though, is that all bills at the end of your cruise have to be settled on standalone ATM-style machines. There are six on the ship and serve as the only way passengers can pay their account bill. We experienced a line of other passengers waiting to use one of the machines, while there was no queue at the guest service desk (which, incidentally, will not accept payments to clear your online account.). The technology doesn't allow you to view your itemized bill, however, only make the payment, so we had to go back to the guest service desk for this -- an experience we found less than seamless.

We're keen to discover how other passengers find the new technology onboard -- particularly on debarkation day when many passengers are trying to pay their bill at the same time.

Masters of the Sea Pub and the London Theatre

These are just name changes from the previous two venues (Brass Anchor Pub and Broadway Theatre), with both venues largely the same except for decor and artwork. But what is interesting is the nod to the UK with the names, which could be for a number of reasons, including the fact that Bellissima is the most popular MSC ship in terms of sales for the UK market this year, including during its Gulf season; or perhaps MSC feels British themes (including a picture of HM The Queen) will resonate more with a Chinese audience than US iconography.

We didn't get to see the shows, but we were treated to a live preview of the new performances at the spectacular naming ceremony in Southampton on Saturday, as well as a minute-long video preview which looked pretty spectacular. We were also invited to an exclusive preview of the shows -- "Syma" and "Varelia" -- at Cirque HQ in Montreal in December. The former is a show about a sailor girl who meets several intriguing characters while lost at sea, and also features mermaids showcasing a bungee dance -- a first for Cirque du Soleil -- while attached to bouncy cords that make them appear weightless, as if they're swimming. "Varelia", is a damsel-in-distress love story with some refreshing twists. During their respective scenes, each main character is represented by a different type of music. The performance focuses less on props than "Syma" does, instead incorporating lights and lasers paired with classical music to soften the effect. Again, worth noting, you'll only see these performances on MSC Bellissima -- at no additional cost to your cruise fare.

We like this ship. OK, we'll go as far to say as we really like this ship. We feel it's a significant step up for MSC in terms of food, entertainment, layout and soft stuff, such as service, which has always been a challenging area for the line. MSC has hit on a good template, so much so that we can expect two more of this class (in "plus" size) -- MSC Grandiosa in October 2019 and MSC Virtuosa in September 2020 -- even bigger, and we assume, even better. We very much look forward to seeing those.