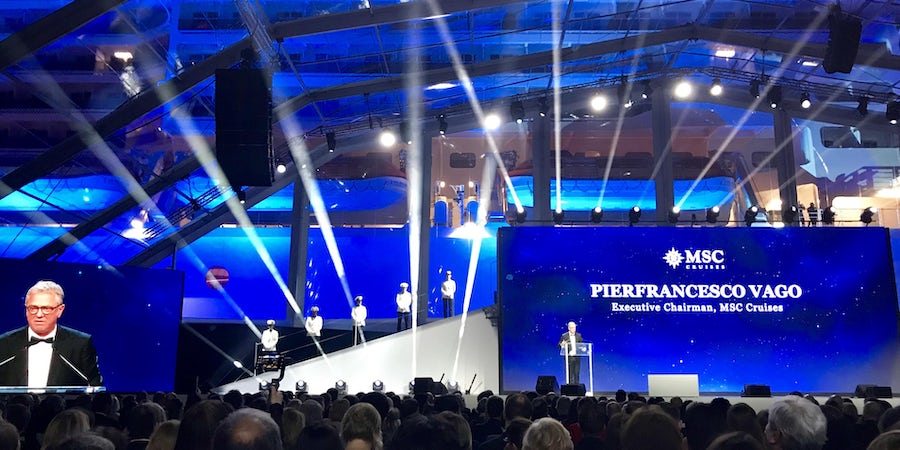 (10 p.m. GMT) -- Despite Storm Freya's best efforts to disrupt the party, Sophia Loren officially named MSC Bellissima in Southampton this evening -- marking the largest ship launch to ever take place in the port.

The event was being held in a marquee next to the ship, but high winds forced guests back onboard to finish off the ceremony.

Held at Southampton's City Cruise Terminal, the naming ceremony was hosted by TV presenter Holly Willoughby, with a stunning performance by world-famous tenor Andrea Bocelli and his son Matteo Bocelli, followed by an exclusive Cirque du Soleil at Sea showcase.

Leee John of the band Imagination will perform later in the evening, while Southampton-born singer Craig David is expected to perform at tomorrow's celebrations.

The line's executive chairman, Pierfrancesco Vago, said: "Welcome to the celebration of MSC Bellissima. So many great ships are connected to this city.

"Southampton is a new home for us, a place we want to build roots and put down ties."

MSC took delivery of Bellissima at a handover ceremony at the shipyard in St. Nazaire, France, earlier this week, where the ship was also blessed.

The 4,500-passenger vessel is the line's second Meraviglia-class ship -- with many of the same features as MSC Meraviglia.

Bellissima features six specialty restaurants -- including the brand-new HOLA! Tapas Bar by Ramón Freixa; a chocolaterie; creperie and 11 bars -- and the line revealed earlier in the day a new partnership with two-star Michelin chef Raymond Blanc.

The ship debuts the line's app and touchscreen technology, MSC for Me, and a voice-enabled Artificial Intelligence device called Zoe that has been fitted to all cabins. Passengers will be able to use Zoe as cruise assistant to find out about the ship's facilities, while MSC for Me can be used to make restaurant and spa reservations and book shore excursions.

Cruise Critic was offered a behind-the-scenes preview of the new shows during a visit to Cirque du Soleil's headquarters in Montreal in December 2018.

MSC Bellissima departs Southampton for Genoa, Italy, on March 4 to commence a season of Western Mediterranean sailings before repositioning to the Gulf, with weekly sailings out of Dubai. In spring 2020 MSC Bellissima will be deployed to Asia.