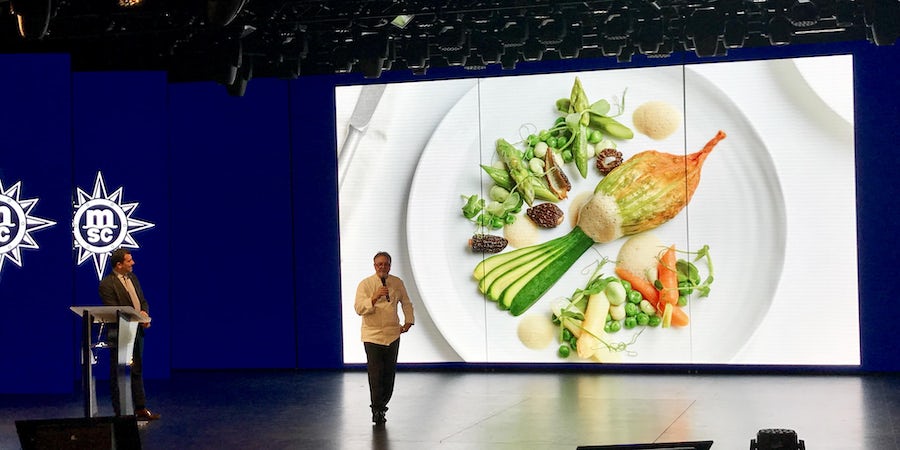 The chef will create a dish for the line's Elegant Dinner menu that is yet to be revealed, but will be permanently available onboard.

The line announced the news at a press conference held onboard the line's MSC Bellissima, which is being christened at an official ceremony in Southampton by godmother Sophia Loren this evening.

MSC's CEO Gianni Onorato, said: "The three pillars of what we do are dining, entertainment and technology.

"To get the best we needed to partner with someone who can really help us in that experience. Someone who shares our values of excellence, innovation and creativity."

Mr Onorato described Raymond Blanc as "an incredible influence on the UK dining scene," before welcoming him to the stage.

Raymond Blanc said: “I am truly looking forward to collaborating with MSC Cruises on some exciting projects, including the development of one of my signature dishes for the Elegant Dinner menu.

"I believe we have a shared passion for the guest experience, and together we will create some truly memorable moments for diners on board.”

Mr Onorato also revealed that German three-star Michelin chef Harald Wohlfahrt will also partner with MSC to create a dish for the line, though it has not been confirmed which ships the dishes will be available on.

The 4,500-passenger Bellissima is home to six specialty restaurants, including the brand-new Hola! Tapas Bar by another two-star Michelin chef, Ramon Freixa, and French restaurant L’Atelier Bistrot, which debuted on MSC Seaside.

The line revealed yesterday that it will remove auto-gratuities for UK & Ireland passengers on departures from the UK from April 2019 on MSC Preziosa. The 3,502-passenger ship offers a short season of 10 sailings out of Southampton between April and September.

MSC Bellissima will depart Southampton on March 4 on a 10-night inaugural sailing to Genoa, Italy. From March 17 the ship will offer seven-night itineraries in the Mediterranean, with calls in Genoa, Naples, Messina, Valetta, Barcelona and Marseille.