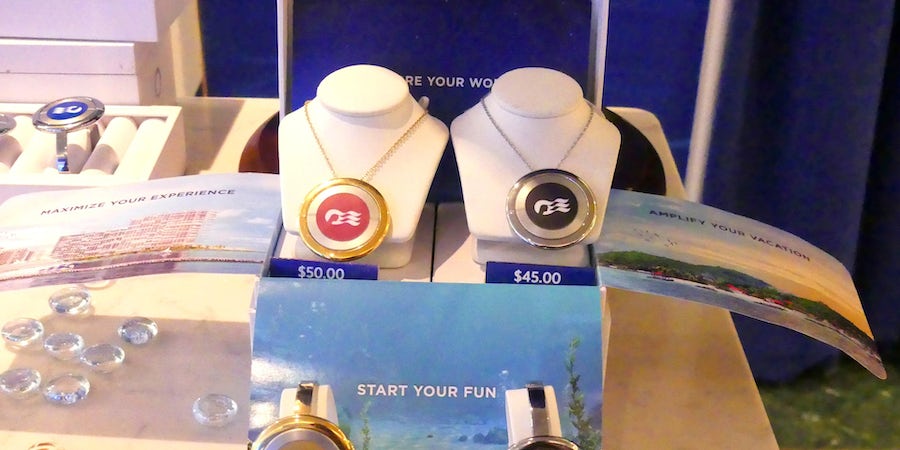 Live From Caribbean Princess: Cruising With An Ocean Medallion

(1 p.m. EST) -- Cruise Critic is onboard Caribbean Princess, one of two ships in the Princess fleet that is already part of the line's new Medallion Class.

On a Medallion-class ships -- which will expand later this year to include Royal Princess, Crown Princess and the line's brand-new Sky Princess (it's already on Regal Princess) -- advanced technology is the name of the game. The goal is to make cruising simpler, more personal and more fun.

Central to the concept is Ocean Medallion, a token about the size and weight of a casino chip that passengers carry instead of a cruise card. The Ocean Medallion enables a variety of experiences, ranging from keyless room entry to food delivery on-demand anywhere on the ship to multi-player gaming under the stars -- and more.

Don't know how to get to the dining room? Easy, Ocean Medallion will get you there. Can't find your cruise mates? It can help with that. Need a drink but don't want to leave your poolside lounger? Ocean Medallion's got you covered there too.

So how's it all working out? Here are our first impressions.

Everyone's Got a Medallion…

Everywhere you look on Caribbean Princess, you'll see various colored Ocean Medallions. Most hang around people's necks on the free lanyard you get when your Medallion is shipped to you at home or given to you at check in. The color is based on the Captain's Circle loyalty program status.

Other people have invested in clips ($8) or bracelets ($55 to $60) as a way of wearing the Medallion. Less expensive rubber bands are coming in April. Others buy flag inserts which they can slip into their Medallion holder to show off their nationality. (Canadians, we're looking at you!)

So far, we've heard no reports of people losing their Ocean Medallions, but if you do, they are easily replaced.

But Not Everyone Is Using It

Everyone's Medallion unlocks the door by the time they get to their room so all they have to do is turn the handle -- no more fishing around in your bag to find your keycard!

It's important to note that you don't need to use your Medallion beyond its keyless entry and onboard purchase capability. You can have the same Princess experience you've always had if you want; you can even choose to skip the Medallion all together and stick with a keycard.

So far, the reaction seems to be mixed, though at the start of our cruise we overheard frustration as people tried to figure out the system. We've seen people using the wall portals to get directions and lots of people playing games. We've have yet to come across anyone who has used the Ocean Medallion to order food and drinks. We have, on the other hand, talked to people who have used the Shipmates application to find their cruise mate -- more for fun than anything.

If you've ever used an app on your phone, Ocean Medallion is easy. As John Padgett, chief experience and innovation officer for Carnival Corp., told us, Ocean Medallion takes popular apps like Waze, Netflix and Uber Eats and brings them to sea.

So if you've ever used a GPS-based app to navigate your car, Netflix or Hulu to watch on-demand TV or been somewhere you can order food from a tablet, you'll have no issues with the Ocean Medallion experience.

Despite the overall ease, Ocean Medallion has a learning curve and requires a little pre-trip training before you go. The line is looking at a number of ways to better prepare people. Expect to start seeing helpers -- called Navigators -- in the terminal during embarkation and embarkation-day training sessions offered over the next few weeks and months.

One common misconception is that you can only use Ocean Medallion with a cell phone and that you need to carry your phone with you at all times. This is incorrect: wall portals, found on every deck in multiple locations, offer most of the same functionality, so everyone can participate. (Food and drink on demand is the main exception; you will need your phone for this).

If you are using your cell phone, however, keep in mind you will need to download five (!) apps in order to do everything -- and that's not including the app you download before you cruise to enable expedited embarkation! Each app does something different; in the first day or two, it's easy to forget which app does what.

We downloaded four of the six total apps -- and they took up more than 780 MBs of space on our phone. One of our travel companions had to delete apps from his phone to make room for Ocean Medallion apps. We're told Princess is looking at ways to bring everything together into one app, but in the meantime, be prepared.

It Does Ease Stress

Many of cruisers' top worries can be eased with Ocean Medallion.

Don't know how to get from your cabin to the atrium or library? OceanCompass will give you step-by-step directions using multiple maps and deck plans.

Don't want to give up your perfect poolside chair? OceanNow lets you order food and drink and have it delivered to you, just about anywhere on the ship. Other than the cost of the item (most drinks cost extra but a slice of pizza doesn't), the delivery is free. You don't even have to tip!

We used this feature to order drinks in the buffet, where it can be hard to find a waiter. It took 10 minutes for a Diet Coke to get to us, but no one came to take our order during that time, so it was faster. In more central locations, drink and food deliveries can take less time. (We ordered a glass of water in Vines and got it in less than two minutes.)

Misplaced your child or spouse? Within Shipmates, you can you link up to other people on the ship and then find them anywhere onboard. It's by far the most popular Ocean application, particularly with parents as well as those with a parent or spouse with memory problems. Crew members we spoke with said they use Shipmates at least once per cruise to help passengers find someone.

Beyond service benefits, Ocean Medallion has been designed to be fun too. Carnival Corp's experience and innovation team includes designers with video game backgrounds so it's no surprise that quite a number of games are available, both on your phone and on the wall portals. We're particular to trivia on our phone and a word scramble game on the portal.

There are also Games Under the Stars sessions -- both during the day and in the evening --in which cruisers can compete against each other. The best of the bunch is the tagalong sprint, during which eight cruisers race their tagalongs against others'.

(So what's a tagalong? It's an avatar-like sea creature - turtle, fish or seahorse -- that each cruiser can customize using various colors, markings and fin styles. Our tagalong is a purple turtle with mottled markings. Great minds must think alike, because the first time Princess Cruises' president Jan Swartz created a tagalong, she also went with a turtle.)

Casino games are also on offer but these require real money.

Stateroom attendants, for instance, can tell if people are in their rooms or not. This lets them clean in a more orderly manner and eliminates the chance of the dreaded passenger-in-the-bathroom scenario. It also means that passengers usually come back to their cabin after breakfast to clean cabins, cutting down on complaints.

Not all room stewards have gotten the message yet; our room steward has twice walked in on us when we were in the room and when we asked him if he had the device that lets him see if its working or not, he fished it out of his pocket and told us the sensors don’t always work. Lo and behold, later on when he saw us returning from the buffet he showed us that despite the fact we were standing in front of him in the hallway, the system said we were in the room.

In the restaurant, crew members can create notes with passenger preferences, so other crewmembers can see if, say, a person likes their coffee with almond milk. The next time that passenger orders a coffee anywhere on the ship, the server can offer them almond milk without asking.

Additionally, all crew members have access to the superfast MedallionNet internet. It's unlimited and allows them to Facetime with their families, watch Netflix or play online games. Every crew member we spoke to loves MedallionNet and couldn't imagine working on a ship without it.

Full Rollout Is a Rolling Target

According to Princess executives Ocean Medallions is in its infancy. Every day, more functionality is added (in particular, new food and drink is available on demand). Cruisers on the next sailing will find more choices than we have, and so on throughout years to come.

Rollouts scheduled over the next few months will include massage on demand, personal schedule creation, and more games and tagalong interactivity. The possibilities for the platform are endless, so while every ship in the Princess fleet may have Ocean Medallion, the exact experience will be constantly expanding.