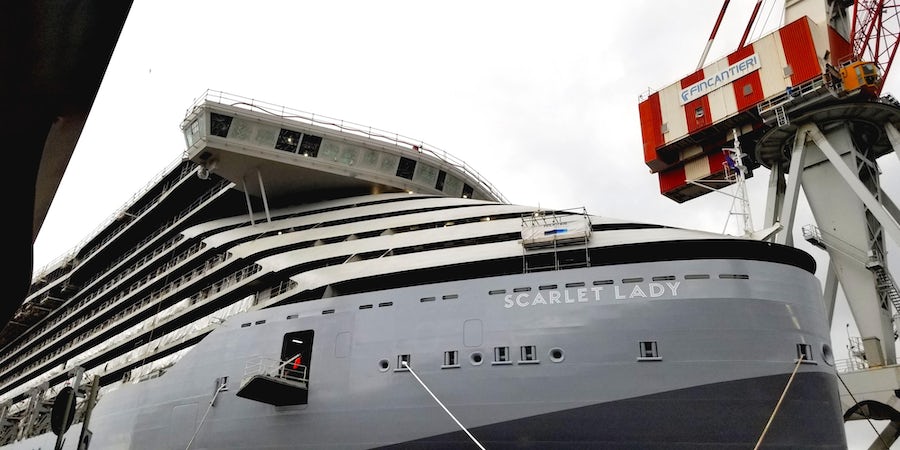 (9:57 a.m. EST) -- Virgin Voyages' first-ever cruise ship, Scarlet Lady, which the line says will be a game-changer with many never-before-seen-at-sea features, is well under construction at the Fincantieri shipyard in Genoa, Italy. When Cruise Critic was invited to join a select group of travel agents and journalists on a tour of Scarlet Lady, we jumped at the chance to be among the first to see this much-touted new ship.

While the ship is still a year from debuting -- its first passenger sailing is scheduled for April 1, 2020 -- our February 9 visit gave us a rare glimpse of what's to come. It's still early in the shipbuilding process, but the weekend marked a milestone: Scarlet Lady floated for the first time, leaving dry dock for wet dock. It is scheduled to float out, another milestone, on February 13. It also marked a milestone for many Virgin employees who joined us on the tour; most were seeing the ship for the first time and we saw tears of joy from people who have been with the project from the beginning. The buzz was contagious.

There's still much construction left on the schedule for the ship -- at this stage, it's mostly exposed steel and wiring -- but the tour gave us our first opportunity to see Virgin's vision come to life. Here are our first impressions from Virgin Voyages' Scarlet Lady.

Balcony Cabins Are A 180 Degrees From Typical.

While onboard, we saw two cabins: a Massive Suite and a Sea Terrace. While the 2,147-square-foot Massive Suite was virtually unrecognizable as a cabin, it clearly lives up to its name. It is enormous, with a balcony that goes on forever. The ship has two of these, located at the very front.

As impressive as we imagine that space ultimately will be, the Sea Terrace is the cabin that really stood out. The show room we saw included some furnishings so we could get an idea of what it will actually look like. When Virgin announced their cabins, they promised the room would be unlike anything the industry has seen before and with the Seabed concept they delivered.

Essentially, with the Seabed concept your bed serves double-duty, functioning as a bed at night and L-shaped seating during the day. (Your cabin steward will change the configuration for you each morning and again at night.) The idea is to have more functional space in your cabin during the day, so people will want to hang out there. (The balconies will also be a cool place to hang, literally, during the day with handmade hammocks.) The Seabed configuration is available to passengers who book Sea Terrace cabins (like the one we saw), Sea View cabins or Insiders.

Seasoned cruisers might notice another difference: The door to enter your cabin is centered, rather than offset, so the closets stretch from the doorway back, offering lots of room for your clothes (and, most importantly, for your suitcases, which won't fit under the bed because of the Seabed design).

The Net Will Be Awesomely Terrifying.

One of the spaces Virgin has been touting is its Athletic Club, an enormous sun deck/lounge, which will feature the largest daybed at sea. The piece de resistance might actually be the "net," a 220-square-foot area covered by a triple-layered netting, where passengers can hang out and watch the world pass by. (If you've ever sailed on a catamaran, the concept will feel familiar.) While you definitely won't feel the sea spray while on Scarlet Lady's net, you will get some great breezes -- and heart-pounding views. Located on Deck 16, part of the net will overlook an open-air dining venue below. But another part will provide unobstructed views of the sea far below. It definitely won't be for the faint of heart. We didn't get to see the net (it hasn't been installed yet), but the open gap had a few people keeping a more-than-comfortable distance, despite the safety railing in place.

Mid-Size Is A Nice Size.

With 2,700 passengers and a gross tonnage of 110,000, we'd classify Scarlet Lady as a mid-sized ship. Because a shipyard tour involves so much walking from space to space, often going from front to back and side to side over and over again, we got a good feel for how comfortably sized the ship is. What's also nice about the space is how they're divvying it up. This was especially apparent in the dining venues. The ship won't have a main dining room, but will instead feature a number of different smaller venues giving passengers more options for where to eat. They all felt cozy, and each will have its own bar. One of the spots we visited, The Dock, will have stellar sea views along with intimate seating and a cool martini bar.

The most complete component of Scarlet Lady at this point appears to be the exterior. The hull has a fresh, slick coat of gray paint, the yacht-inspired straight-edged bow is glossy and the ship's name is beautifully stenciled on the hull. In fact, the only thing that's missing is the company's signature mermaid. While straight and parabolic bows are more common on cruise ships these days, this vessel looks different from others. This comes in large part because of that yacht inspiration: The decks under the bridge are streamlined in a way reminiscent of smaller personal craft, with streamlined angles. It's a stark difference to some more traditional cruise ship designs. The colors, too, stand out, with stark white lettering on light gray, which blends into a deeper shade of gray closer to the bottom of the ship. Scarlet Lady will be easy to pick out in port.