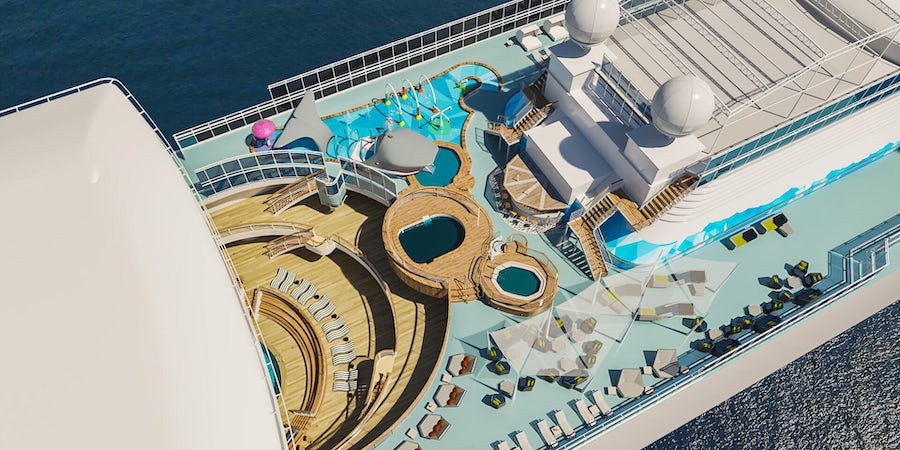 (3:21 p.m. EST) In preparation for Caribbean Princess' summer season in the Caribbean, Princess Cruises will replace the ship's Pirate's View aft pool on Deck 17 with an all-new Reef Family Splash Zone. The line revealed details of the new concept, which will include a kiddie pool as well as ample lounging space; the existing pool, hot tub and bar also will be upgraded with new signage and contemporary artwork.

Among the new features on Deck 17 will be an interactive water playground for kids, with a whale sculpture that will "rain" from its fluke; a backyard-style game zone with sofa sectionals, a kid-friendly bar setting serving cocktails and mocktails, and games such as cornhole, Jenga and Connect Four; a redesigned seating area with new outdoor furniture, part of which will be shaded by a canopy; wind-shielding panels throughout the area; and an upgraded lighting and music system.

The deck space that will house the Splash Zone, located at the back of the ship above the kids' club, should not be confused with Princess' popular Terrace Pool on Deck 14 aft.

Caribbean Princess is scheduled to emerge from its latest dry dock in June 2019. In summer 2017, the ship underwent a multimillion-dollar refurbishment that welcomed a slew of new dining options and cabin upgrades as well as a redesigned Lido Deck.

The 3,112-passenger ship -- which sails from Fort Lauderdale most of the year, splitting its time between the Caribbean, and Canada and New England out of New York City and Quebec City -- also is one of only two Princess ships to be fully outfitted with the line's Ocean Medallion technology.

Cruise Critic will be onboard Caribbean Princess, beginning on February 23, to try out the Ocean Medallion experience, which incorporates high-speed internet and features such as keyless cabin entry, virtual concierge service and a family-tracking navigation system through the use of wearable discs. Stay tuned for coverage.