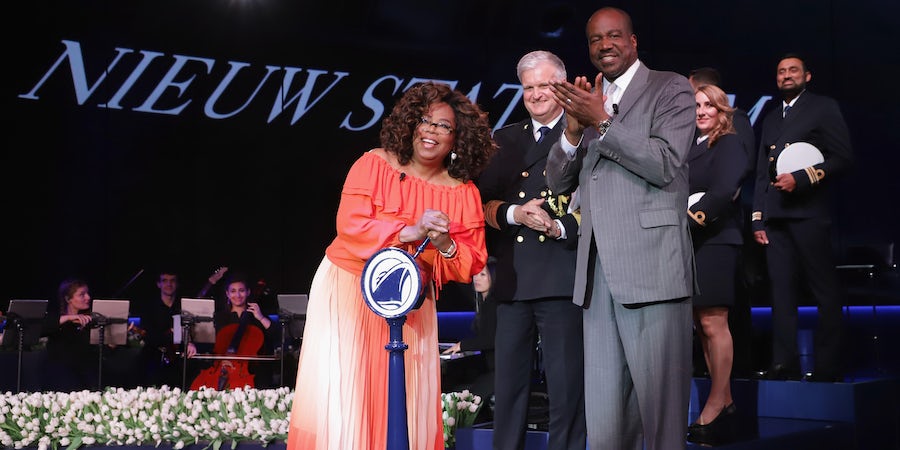 (3:57 p.m. EST) -- Oprah Winfrey's first Girlfriends' Getaway cruise might have ended today, but it was only the beginning for Holland America Line's Nieuw Statendam, which officially was christened by the long-time talk-show host, movie star and philanthropist while the ship was docked in Fort Lauderdale's Port Everglades.

In an intimate ceremony held in Nieuw Statendam's high-tech World Stage, godmother Winfrey blessed the ship by pulling a lever that released a Champagne bottle against its hull. The event, which is a traditional part of launching a new ship, took place in front of gathered cruise industry executives, local dignitaries, media, travel agents and Winfrey's family and friends.

Arnold Donald, president and CEO of Carnival Corp. -- parent company of Holland America, among other brands -- kicked off the ceremony with a welcome speech, before handing over the mic to the line's president, Orlando Ashford. Donald commended Ashford for bringing a "higher level of energy to the Holland America brand" through new partnerships such as the one with O, The Oprah Magazine.

Ashford talked about his experience on the Girlfriends' Getaway cruise, on which more than 2,400 women (and 57 supportive men) embarked on a three-night journey from Port Everglades to Holland America's private Bahamian island, Half Moon Cay. The cruise, which sold out in less than 24 hours after going on sale last summer, was hosted by Winfrey and her bestie, TV personality and journalist Gayle King, and included a series of themed activities for die-hard fans. (We were onboard to get an inside look at all the action; stay tuned for our report.)

A highlight of the christening ceremony was when three crewmembers -- Captain Sybe De Boer, Environmental Officer Diana Mihalache and Dining Host Dee Dewi -- shared personal stories of the ship's development and how Holland America has touched their lives.

"Our officers and crew are the people who make it all happen," Ashford said after the three spoke. "We would not be Holland America without them."

The ceremony concluded with Winfrey taking the stage, opening up about how inspired she was by passengers on the Girlfriends' Getaway cruise that brought together passengers from as young as 6 years to as old as 93. She then turned to Ashford and boisterously asked: "When are we going to do it again? Where are we going next?" (Although a second Girlfriends' Getaway cruise has not been confirmed, there reportedly are talks of one.)

"May God bless her and all who sail on her," Winfrey said, christening the ship with a successful bottle smash -- a spectacle that was broadcast on the 270-degree LED screen behind her and immediately followed by cheering and a standing ovation. (The ceremony also was live-streamed.)

Nieuw Statendam has been sailing the Caribbean from Port Everglades since December 19, when it arrived to the U.S.; Venice's Fincantieri Marghera shipyard turned over the ship to Holland America in late November. On April 21, it will reposition to Amsterdam and operate Northern Europe and Iceland cruises in summer 2019, before heading to Rome and spending fall 2019 in the Mediterranean. The ship will return to Fort Lauderdale in November 2019.

The ship is the second in Holland America's Pinnacle Class and is nearly identical to its sister Koningsdam, with the exception of a few unique features: an expanded World Stage theater; a reimagined Tamarind restaurant with outdoor seating and a new Nami Sushi Bar; and a suite passenger-exclusive restaurant, Club Orange, in lieu of the Culinary Arts Center.