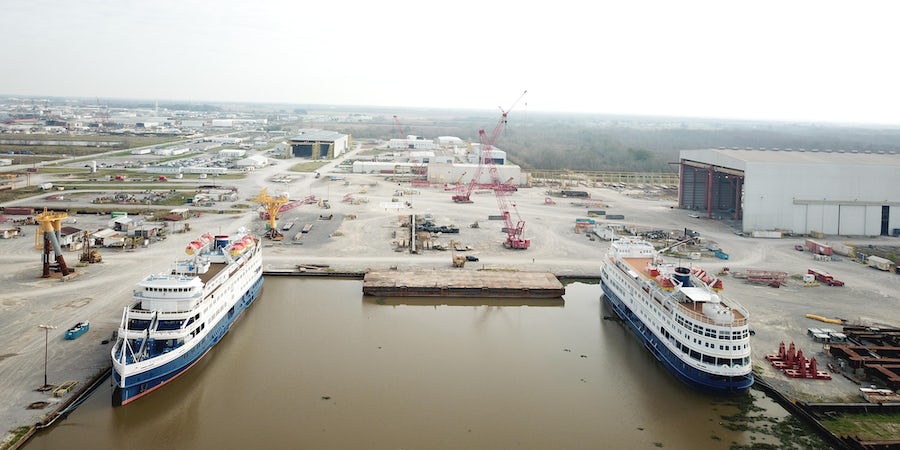 (9:40 a.m. EST) -- Once known primarily for the historic American Queen riverboat, the American Queen Steamboat Company is undergoing an expansion that will more than double its current fleet by 2021.

The company, based in the greater Louisville area, has finalized its purchase of Victory Cruise Lines, a line specializing in coastal cruising. With that acquisition, AQSC picked up two 202-passenger boats, Victory I and Victory II, which will sail the Great Lakes, the Eastern Seaboard and possibly, Mexico.

In addition, the line is converting a former gaming boat, Kanesville Queen, into American Countess. That traditional boat is being revamped to be more group-friendly (more on that later), and will carry 245 passengers. It debuts in April 2020 with itineraries primarily on the Mississippi.

And finally, the line is looking at its first foray into Alaska, by chartering Ocean Victory in 2021. The 200-passenger ship, being built in China by SunStone Ships, will have icebreaking capabilities and an array of expedition features, such as an observation lounge and Zodiacs.

Three of the vessels are being worked on at Gulf Island Fabricators in Houma, Louisiana. Cruise Critic toured the shipyard with AQSC founder and CEO John Waggoner and David Kelly, the line's executive VP for hotel operations and new builds.

Here's what you want to know about the line's expansion:

Waggoner said he's been aware of the twin boats called Victory I and Victory II for the past decade; the ships were built at the same Jacksonville shipyard as American Empress. The current acquisition was the third time he had considered buying them, so the purchase went quickly.

Having coastal cruisers that can sail the Great Lakes, as well as the Eastern Seaboard and international waters, will give AQSC "another arrow in the quiver," Waggoner said. Guests on the line's current vessels have been asking for new itineraries, and the Great Lakes in particular are "an untapped market."

The 2019 season will begin in early May for Victory I, which is slated to first sail the St. Lawrence Seaway from Portland, Maine, to Toronto. It then moves to Chicago, where it will begin a season of nine- and 10-night sailings between that city and Toronto. Stops include Mackinac Island, Sault Ste. Marie, Detroit, Cleveland and Niagara Falls.

Victory II kicks off its season in mid-May with a cruise from Boston to Montreal. Its regular route will run between Montreal and Detroit, with stops in Quebec City, Toronto, Cleveland and Niagara Falls.

The calendar is built through late October 2019, with both ships returning to New England for fall foliage. For its new season, the line did have to cancel some of the already booked Victory cruises, including those running to Cuba. Waggoner cited softness in that market for smaller ships, as well as the lack of ports. Instead, the company is eyeing Eastern Seaboard cruises that encompass cities such as Charleston and Savannah, as well as cruises to Mexico's Yucatan Peninsula. Those sailings may run out of Cancun and visit ports such as Campeche, he said.

The Victory ships will continue to be run under the Victory Cruise Lines name, with an addendum that they are run by American Queen Steamboat Company, Kelly said. They will also retain their Bahamian flag, although the company will begin the paperwork to change it to an American line -- a process that can take up to two years, Waggoner said.

During its first year, Victory Cruise Lines will continue as a mostly inclusive product, with all alcoholic drinks and excursions covered in the fare. Gratuities for the international crew are not included. The company is eyeing ways to add its signature hop on, hop off-style of touring in the future, Waggoner said.

A tour of Victory II at the shipyard revealed a cozy vessel with traditional touches such as imprinted ceilings and chandeliers in the entertainment lounge. An enclosed specialty restaurant on the top deck boasts cheerful nautically inspired decor. The cabins, which are all named for coastal cities, range in size from 146 square feet to two 335-square foot Owner Suites. Most cabins have large picture windows, while those on Deck 4 have a semi-private terrace.

Unlike any AQSC boats, the Victory vessels have a small fitness room and a combo salon/spa room. "We figured, let's operate it the first year and see how it goes," Kelly said.

A Traditional Boat that Caters to Groups

With American Countess, Waggoner is continuing the practice of buying old casino boats and completely transforming them into cruise ships. When people ask him why he prefers that method of growth, "I tell them it will save me $20 million, and I get it done faster," Waggoner said.

The former Kanesville Queen has been cut in half and is being expanded by 60 feet. The company has learned from its previous ship renovation, American Duchess, and giving themselves more time at the shipyard to get the work done. American Countess will not debut until April 3, 2020, when it will be christened in New Orleans -- in AQSC fashion -- with a bottle of Kentucky bourbon.

American Duchess emerged from its renovation as an elegant riverboat, with 18-foot ceilings, loft suites and luxurious furnishings. American Countess will be a little more traditional in its decor, and will be meant for a lower price point. In particular, Waggoner said, the line is aiming the boat toward groups; to that end, the vessel will have some smaller rooms and gathering places for additional lectures or meetings.

American Countess will also gain a paddlewheel at the aft. AQSC's passengers like paddlewheels, Waggoner said, and adding them actually gives the boat more horsepower.

Cabins onboard American Countess will range from 170-square-foot inside cabins to 255-square-foot rooms with a private balcony. A large number of cabins will also have an "open veranda," where you have a private enclosed area facing a promenade open to passersby. It's a design feature on the American Queen that the passengers really like for its sociability, Kelly said.

Technically, American Countess will homeport in Louisville, where Waggoner lives. But it will deploy according to what's popular, he said -- and often that's the Mississippi between New Orleans and Memphis. In particular, international passengers want to visit those cities since they are world-renowned for their cuisine and music, he said.

"You see what sells," he said. "We follow what our guests want."

As part of its acquisition, AQSC will exercise an option to charter Ocean Victory, a new expedition ship for Alaska. The expedition ship will debut in March 2021, but the itineraries will begin appearing in the next six weeks, Waggoner said.

While many large cruise ships have entered Alaska in recent years, bringing down prices, small ships seem to be bucking that trend, Waggoner said. In the past, the line had often tried to steer its customers interested in Alaska to competitors such as UnCruise Adventures, without success since they were full.

"It gives us a feeder market," Waggoner said. "If we can get people in their late 30s and 40s onboard, they'll be customers for the next 40 years."

With so much growth coming quickly, is there still room for expansion? Don't count it out, Waggoner said.

His oldest daughter, Angie Hack, will be the godmother for American Countess. Previously, his wife and another daughter christened vessels -- and he still has one more daughter and two granddaughters, he joked.

"I'm always looking for things," Waggoner said. "There's one or two (boats) still out there."