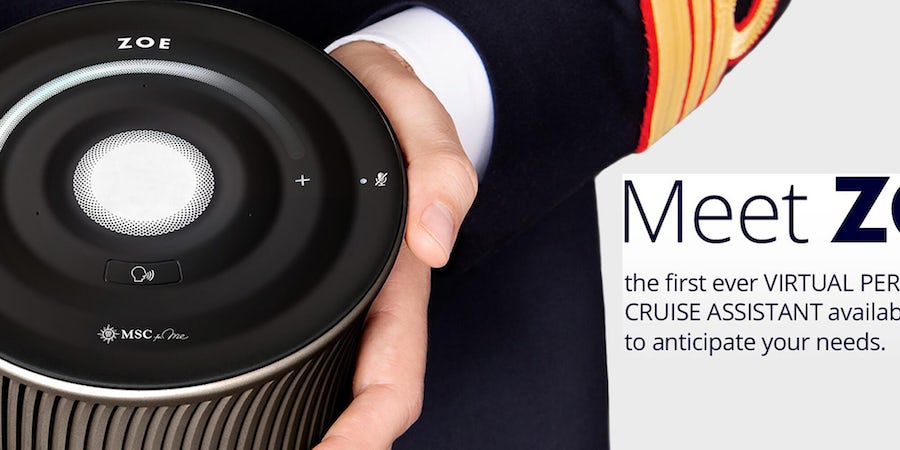 (7 p.m. GMT) -- MSC Cruises has officially launched the world's first "personal cruise assistant" -- Zoe -- a voice-enabled Artificial Intelligence device that will be in every cabin onboard MSC Bellissima.

The tiny device, similar to the Amazon Echo, will nestle in the desk area in every cabin and has been programmed to answer 800 typical ship-related questions -- in seven different languages.

Zoe will be able to offer information about onboard services and venues, and provide guidance and suggestions such as what activities are taking place on the ship.

The device cannot make bookings, dim lights or turn up the AC -- yet -- but that is a long-term plan when Zoe becomes integrated into the line's online technology, MSC for Me.

Speaking at the launch in central London, Gianni Onorato, MSC Cruises' CEO, said: "There was a core guest need to be met, which was to find answers to common questions in a quick and easy way, enabling guests to make the most of their holiday.

"We researched the latest connected technologies and identified voice assistants and Artificial Intelligence as the way to meet this need and the work on ZOE began."

The AI aspect means Zoe is constantly "learning", so every time it is asked a question it cannot answer, it stores that question and develops a response for the next time someone asks that question.

The advanced voice recognition feature makes it easy for anyone to control and access information using only voice commands with just the words: "OK Zoe". Also, Zoe can be turned off instantly at a push of a button.

Zoe is a genuine first in the cruise industry -- a number of lines are trialling voice recognition technology at embarkation and apps which allow you to make bookings and control cabin features, but none are AI. It has been developed by Harman International and Samsung.

Testing was carried out on the conversation designs, Zoe's natural speech recognition and ability to transform speech into text and back again, in addition to scores of other behavioural, experiential and performance tests.

Zoe will launch on MSC Bellissima on March 2 in Southampton and will then roll out on every new ship that launches, including MSC Grandiosa, which debuts in October 2019, and MSC Virtuosa in 2020.

When asked about retrofitting Zoe to the rest of the fleet, Onorato said that would be an ideal but complicated to achieve.