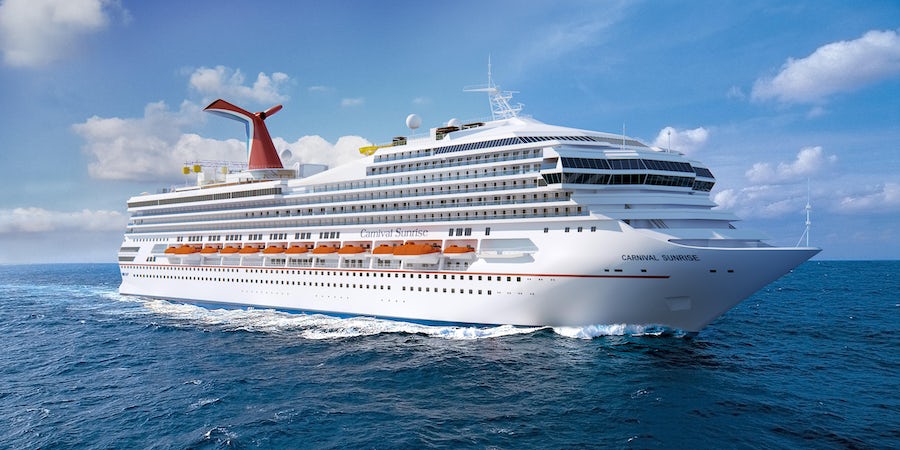 The Most Exciting Cruise Ships to Come in 2019

(9:33 a.m. EST ) Trampolines, race cars, waterslides and some of the largest balconies at sea are among just a few of the standout attractions cruisers will be able to find on cruise ships in 2019. With four mega ships launching between April and the end of the year, now is the perfect time to start planning your cruise vacation.

The options for onboard fun and delicious dining will be endless whether you're looking at conquering the ropes courses on Carnival Sunrise and Carnival Panorama, supping on a meal from a 3-star Michelin chef on Sky Princess, or battling it out with your fellow passengers in the laser tag arena on Norwegian Encore.

Learn more about each new ship, as well as the itineraries it will sail, below.

The first new ship of 2019, Carnival Cruise Line's Sunrise isn't a completely new ship at all. Being built on the bones of Carnival Triumph, which the line is putting through a $200 million refurbishment, Carnival Sunrise will be different enough from Triumph to be considered new.

Similar to Carnival Sunshine (which was built on the bones of Carnival Destiny), Carnival Sunrise will boast a ropes course, two-waterslide WaterWorks play area and RedFrog Pub, among other popular Carnival staples. It will also have a few attractions that debuted on the line's Vista class such as Guy's Pig & Anchor Bar-B-Que Smokehouse, the Seafood Shack and the multipurpose Liquid Lounge Theater. New-to-Carnival spots on the ship will be a revamped Piano Bar 88 and two Captain's Suites, which will be situated atop the ship's navigation bridge and feature floor-to-ceiling windows.

Carnival Sunrise will sail to the Caribbean starting in late April from Norfolk, Virginia, before moving to New York City for a summer season of Caribbean, Bermuda and Canada/New England cruises. In winter 2019, Sunrise repositions to Fort Lauderdale for Caribbean, Bahamas and Cuba voyages.

While modeled after it's Royal-class fleetmates (Royal, Regal and Majestic Princess), Sky Princess will not be a carbon copy. Like its sister ships, 80 percent of Sky Princess' cabins will have balconies and the ship will feature the multistory Piazza atrium, Movies Under the Stars LED screen and the adults-only Sanctuary. It will also have the line's largest-ever thermal suite, dubbed The Enclave, as well as more hot tubs than other Royal-class ships.

A first for the line will be the ship's new La Mer restaurant, created in partnership with 3-Michelin star chef Emmanuel Renault; the Take Five jazz lounge; and a new suite class, the Sky Class, which will boast the largest balconies in the fleet (947 to 1,012 square feet). Another big difference: Sky Princess will not have a glass-bottom SeaWalk walkway.

Sky Princess will debut in the Mediterranean in October 2019 with 10 sailings in the region before repositioning to Fort Lauderdale in early December. From there, it will sail in the Caribbean with late-night stays in St. Thomas and Cozumel on select itineraries.

Norwegian Encore will be the fourth and final ship in Norwegian Cruise's Breakaway Plus Class, joining sister ships Norwegian Escape, Norwegian Joy (which arrives in the United States in April after sailing in China for two years) and Norwegian Bliss. It will feature several elements found on Norwegian Joy and Bliss including the Galaxy Pavilion, a 10,000-square-foot virtual reality complex; an expanded two-level go-kart race track, with a section of track extending out over the side of the ship; an open-air laser tag arena; and the line's popular Cavern Club, offering standing room performances by a Beatles cover band. The Broadway show on Norwegian Encore will be a 90-minute version of "Kinky Boots."

Norwegian Encore will sail out of Miami every Sunday from November 2019 to April 2020. Then it will reposition to New York City and offer seven-night cruises to Bermuda.

The final new ship to launch in 2019 is Carnival Panorama, the third ship in Carnival's Vista Class. The ship will be nearly identical to Carnival Vista and Carnival Horizon, with two significant differences. Panorama will have a 3,000-square-foot SkyZone Trampoline Park with a 12-lane trampoline court (the first trampoline park at sea) and it will not have an IMAX at Sea.

Like its sister ships, Panorama will have a handful of Carnival's most popular eateries including Bonsai Sushi & Teppanyaki, Guy's Pig & Anchor Bar-B-Que Smokehouse and Brewhouse, Cucina del Capitano and others. It will also have a SkyCourse ropes course, WaterWorks aqua park and the SkyRide. Accommodation options will include the exclusive Havana cabin section with its own pool (exclusive during set hours), as well as the keycard-protected Family Harbor featuring family-friendly rooms and the Family Harbor Lounge.