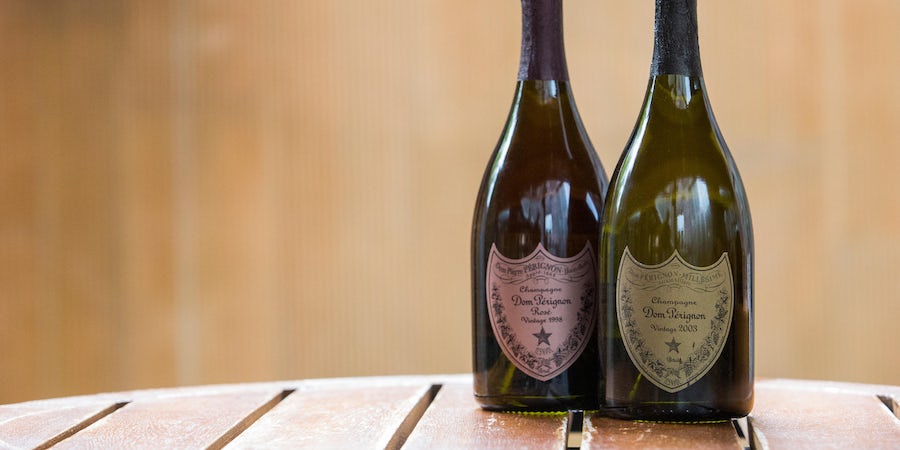 Oceania Cruises, the upscale cruise line that already draws raves for the best cuisine at sea, has added another top-notch culinary experience to its roster: Beginning this month, the line will offer a special six-course Dom Perignon tasting menu as an extra-fee option on two of its ships.

The Champagne dinner will take place on Oceania's two O-class ships, Riviera and Marina, in La Reserve, beginning on January 15 and January 31, respectively. It will be offered to guests at least once per cruise and will cost $295 per person (plus 18 percent gratuity).

The menu has been months in the making, involving both Oceania's Corporate Chef Franck Garanger and Marco Fadiga, executive chef of Moet & Chandon, the Champagne house that produces Dom Perignon. It focuses on three vintage Champagnes -- Dom Perignon 2009, Don Perignon 2006 and Dom Perignon Rose 2004 -- with two courses being built around each wine.

Cruise Critic, which already named Oceania as their top pick for dining in the 2018 Editors' Picks awards, received a sneak peek of the experience onboard Riviera in Miami this weekend. Here are seven reasons why we believe foodies will flip for Oceania's new option (and why we'd gladly pay to have it again next time we're onboard).

Among Champagne lovers, Dom Perignon enjoys a unique reputation, as it's only released as a vintage wine. That means the Champagne is drawn entirely from grapes harvested in a certain year. If the fruit isn't up to snuff that year, Dom Perignon won't be released. Dom Perignon is also unusual in that it relies on just two grapes, Chardonnay and Pinot Noir. French law, which highly regulates Champagne, allows five other grapes to be used in blends, but Dom Perignon sticks to the two, which allows the wine to age for decades and keep its signature flavors.

The pairings are perfect.

Chefs Franck and Marco went out of their way to create dishes with flavors that would bring out the best in the vintages -- and create some surprises, too. The appetizer of foie gras atop scallops served with roasted pineapple and a mole negro sauce is one example. The Dom Perignon 2009 that's served with it not only cuts through the fat of the foie gras, but it's also the slightly smoky pineapple and the chiles in the mole sauce that really makes the wine come alive. The same vintage is matched later in the meal with a tea ice cream, lemon caviar and a thin wafer that draws out the Champagne's salty caramel finish.

If you're someone who usually thinks of Champagne as an aperitif or a drink reserved for toasts, the dinner will be a revelation. "We wanted to avoid the obvious," we were told, and that's what the courses deliver. We never expected a rose -- OK, it's Dom Perignon rose, but still -- to be served with Wagyu beef (topped with caviar) and have the flavors work so well. And while we already knew that salty foods paired well with Champagne, we didn't realize how well the wine would also taste with black pepper and thyme -- crusted around a sweet paste and served with cheese. Now we know that Champagne is a suitable option throughout a meal, perhaps we'll try it at home sometime (although at a lower budget than Dom!)

Tasting menus can be tricky. Sometimes the portions are too big and you're uncomfortably full later in your cabin. Sometimes they are too small, and you're tempted to go back out to the buffet for a nosh within a few hours. The Dom dinner gets the portions just right. It's a lot of rich food, so you'll want to eat light earlier that day. But you won't feel like the line is skimping on luxurious ingredients. The second course, for example, is lobster served in a yellow curry broth with coconut foam -- and the bowl contained a generous amount of crustacean. Likewise, the servers didn't skimp on the pours. You receive tasting-sized portions, but glasses were refilled regularly without having to ask for more. By the end of the six courses, we were definitely in a happy food coma, but in a good way.

The pricing is reasonable.

Dom Perignon evokes luxury, for good reason. Bottles command prices of $150 plus, meaning that it's something most people reserve for a special occasion. Unless you're being invited to some very luxurious dinner parties, it would be extremely pricy (and pretty unusual) to be able to sample three Dom Perignon vintages at one meal at home. Most restaurants do not sell high-end Champagne such as Dom Perignon by the glass, and if they do, it's about $45 and up for each. We get that $295 per person can seem like a lot for one meal. But considering how much Champagne you get to drink, as well as the high-end ingredients such as lobster, Wagyu beef, gold leaf (atop a black truffle risotto), Oceania's Dom dinner is comparable in price (and perhaps a little less) than what you'd spend for a similar meal on land.

It's a celebratory experience.

One of the reasons we seek out wine tasting meals on cruise ships is because we know it's going to be a special experience shared with other food and wine lovers. Oceania has set the stage for the Dom dinner in La Reserve, with intimate rectangular tables, silver candelabras and black Dom Perignon menus that you can take with you. We can imagine taking part in one of these dinners onboard and making friends who we'd want to see throughout the cruise. The meal also would be a memorable way to mark an onboard birthday or anniversary. One thing is for sure -- it's something that you'd end up talking about for the rest of the trip.

If the dinner still sounds too rich for your blood and you still want to taste Dom Perignon, we've been told that Oceania is developing ways to make that happen, possibly with a tapas menu and a single glass in La Reserve. "This is just the beginning of the partnership," spokesman Tim Rubacky said.