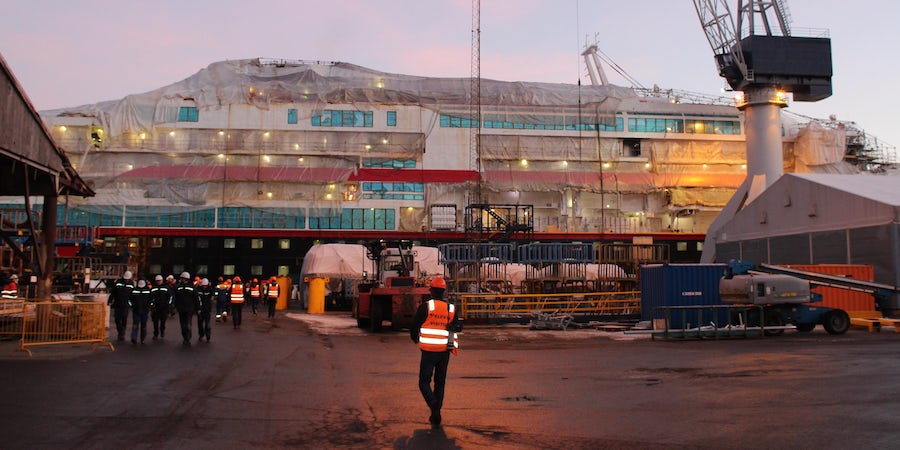 (11:15 a.m. EST) -- In spring next year, the Champagne bottle will be cracked against the hull of the world's first hybrid powered cruise ship, the MS Roald Amundsen.

Described by Hurtigruten CEO as "the Prius of the seas", the ship will contain a number of batteries that -- just like hybrid cars -- operate at lower speeds, ensuring the ship glides silently around sensitive polar waters.

We got a sneak peek last week at the shipyard in Kleven, Norway to find out whether the ship is a game-changer -- and if it really can change the face of the cruise industry, as Hurtigruten claims.

There's no denying that Hurtigruten is making a credible attempt to reinvent the cruising wheel with this ship, which after a number of delays is set to launch next spring. Deep in the guts of the vessel, in a room adjacent to one that contains the Rolls Royce engines, there's the battery room.

Barely bigger than a walk-in wardrobe, this unassuming space contains a row of neat, asylum-white battery stacks that -- along with the advanced hull and effective use of electricity onboard -- will reduce fuel consumption and CO2 emissions by 20 per cent.

It's this feature that Hurtigruten believes is going to fill up the cabins as MS Roald Amundsen embarks on its first journeys from Lisbon to Hamburg, along the coast of Norway, and then beyond to Greenland, the North West Passage, Alaska and the area Hurtigruten calls its "second home", Antarctica.

"In the future, more and more cruise guests will be focused on travelling sustainably," explains Daniel Skjeldam, CEO of Hurtigruten. "We believe our new ship will attract new guests who don't feel good about travelling around the world by using heavy fuel oil. More and more guests will want to see areas and know they will remain the same in 50 years' time."

After getting a first look at the ship, however, we get the feeling that its green credentials won't be the main reason that it books up, at least in the first instance.

Here's a round-up of the features that should act as even stronger sirens to cruisers.

The pearl in the MS Roald Amundsen's oyster is the Science Centre. It's been given the pet name of "the floating university" by Hurtigruten's most experienced expedition leader Karin Strand, who has been to Antarctica more than 100 times.

With both indoor and outdoor areas, the Science Centre will be a space where guests can attend lectures, watch footage sent back from the ship's underwater drones, and listen live to the sounds of the surrounding ocean, including noises made by the likes of whales swimming by.

Passengers onboard the MS Roald Amundsen will also be able to take part in science experiments in the Science Centre. This includes playing a hands-on role in the research that Hurtigruten is carrying out in partnership with institutions like The Scripps Institute in California into subjects like the presence of microplastics in the ocean.

Hurtigruten hasn't got a reputation for being a luxury cruise line. In fact words like "ferry" and "functional" crop up regularly in Cruise Critic reviews of its older ships. Up until now, Hurtigruten has barely so much as whispered the "L" word. However, the plush bar has well and truly been raised with the MS Roald Amundsen.

The standard state rooms have a penthouse quality to them. High spec natural materials such as oak, birch and wool are an integral part of their Norwegian-inspired design and there's a serious sense of space. On top of this, all cabins are outward-facing and 50 percent come with balconies. Then there are the suites -- six of them feature outdoor hot tubs.

Talking of hot tubs, there are two on the pool deck, too -- framing the infinity pool and flanked by beach club-quality day beds big enough for two.

Then there's the Lindstrom restaurant -- one of three eateries that will feature on the new ship. Included in the price for suite guests the Lindstrom is a 70-seat fine-dining eatery with a cocktail lounge included.

Even Skjeldam has started breaking the boycott of the luxury term, albeit hesitantly: "Hurtigruten don't want to use the word luxury," he explained, before backing up the conversation a bit. "Our staff will never put a tux on and play the cello, but MS Roald Amundsen is going to be a very very comfortable ship. From the fine dining on board to the comfort of the state rooms, it's setting a new standard in the Hurtigruten fleet.

"It's going to be an oasis that guests can come back to after a day exploring. We're going to be able to offer guests more and more authentic experiences with the MS Roald Amundsen, too. All of this is the Hurtigruten luxury."

"This is the very first meal that's ever been served onboard the MS Roald Amundsen," Freddy Bruu, food and beverage director and fully trained chef, explained to us as he greeted us with tacos in what is becoming the Lindstrom restaurant, during our behind the scenes ship tour.

"What did you think of the meat?" he questioned, once all that was left of the food was stained napkins. Delicious was the consensus.

"Well let me tell you it wasn't meat," he revealed.

The "mince" in the tacos that we tried was made using root vegetables, oats, peas and seaweed. This dish, and more than a token offering of similar options, will become regular features on the menu in the Fredheim restaurant, alongside rotisserie choices, street food and kebabs.

Hurtigruten is a little coy about using the word vegan. Instead it's using terms like "plant based", "clean eating" and "options for guests" to explain a certain significant element in its new culinary offering. Semantics aside, it's clear that vegan food will be more than an afterthought in the gastronomy of the MS Roald Amundsen.

In 2020, in a first for Hurtigruten, the MS Roald Amundsen will enter Alaska. However, the cruise line intends to do it a little bit differently to other cruise companies that offer itineraries in the area. Skjeldam explains:

"Alaska is a popular place for large cruise ships, but we want to do it differently. We will go to places that bigger ships can't go, such as picturesque Petersburg. We will offer a different type of product."

So, does the MS Roald Amundsen have the capacity to really change the global industry's approach to building cruise ships? Time will tell.

Until then, the hybrid-powered ship marks a sea change for Hurtigruten itself on multiple fronts from style and comfort to well-being and indulgence.