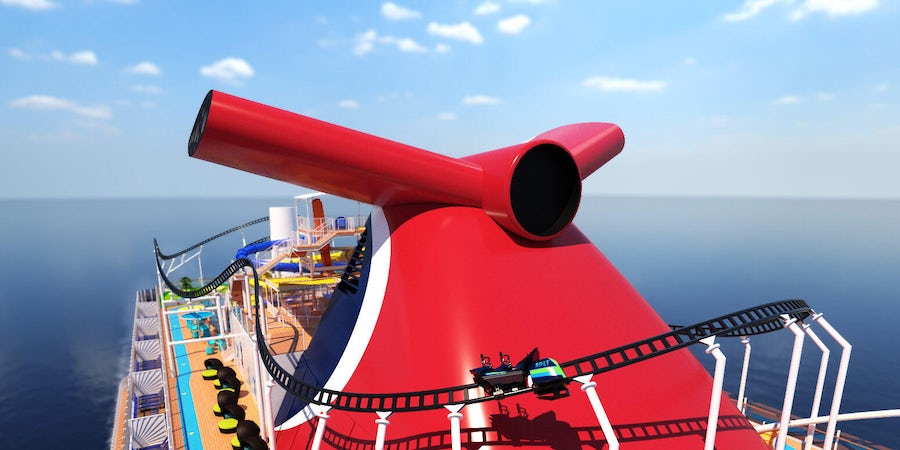 The all-electric roller coaster, designed by Munich-based Maurer Rides, will enable two riders to soar in a motorcycle-type car 187 feet above sea level; riders will be able to control their own speed. The track will run the perimeter of Carnival Mardi Gras' top deck and include a loop around the line's funnel. Like land-based roller coasters, a camera will capture riders' photos, which can be purchased at the end.

A spokesperson for the line said: "Our initial plan is to try and make the roller coaster complimentary for our guests. Any fee would only be implemented to help manage demand."

Carnival Mardi Gras is slated to launch in 2020 as the line's largest ship, with a passenger capacity of roughly 5,200 at double occupancy. The ship, whose name was revealed last week on television gameshow "Wheel of Fortune," will be the first in North America to run on liquefied natural gas (LNG), an environmentally-friendly fuel that produces nearly zero emissions.

"Mardi Gras will be our most innovative ship ever with some truly special features and attractions, highlighted by BOLT, the first roller coaster at sea,” said Carnival's president, Christine Duffy. "BOLT will continue the tradition of Carnival providing exciting new ways for our guests to 'Choose Fun.' We are so thrilled to introduce this one-of-a-kind, game-changing, exhilarating attraction -- our guests are going to love it!"

The ship will homeport in Port Canaveral (Orlando) at a brand-new terminal designed specifically for vessels of its size; the terminal is set to be complete several months before the ship's debut. Itineraries are expected to be released in 2019.

While Carnival Mardi Gras' BOLT will be the first true roller coaster at sea, other similar attractions include the SkyRide on Carnival Vista and Horizon, as well as the AquaDuck water coaster on Disney Dream and Disney Fantasy.

In addition to Carnival Mardi Gras, Carnival Cruise Line has two other forthcoming new-builds. Among them are Carnival Panorama, which the line recently revealed will have a SkyZone trampoline park onboard, and another LNG ship that has yet to be named. They will launch in 2019 and 2022, respectively.