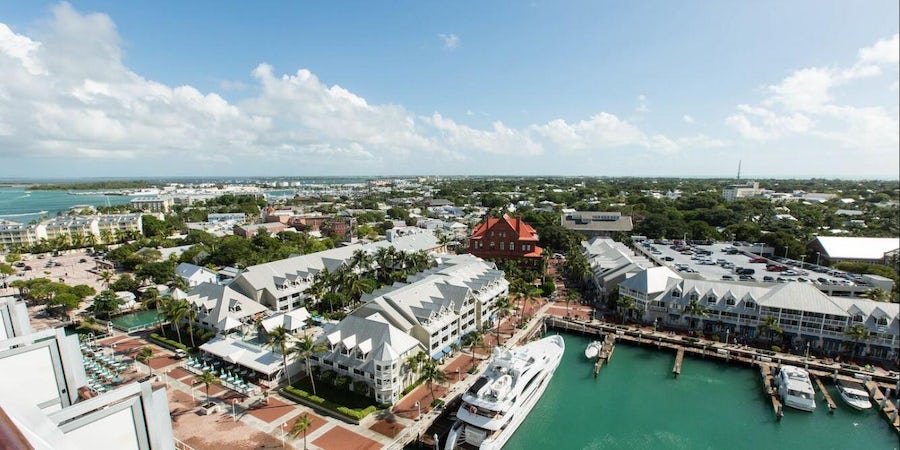 One of Key West's Cruise Ports Closed Due to Damage Sustained by Ship, Repairs Underway

(3:40 p.m. EST) -- Key West's Mallory Square port is closed for at least three months to repair damages to a mooring caused by an errant cruise ship in late November, according to multiple reports. The city's other two ports of call -- the Outer Mole Pier at the Truman Waterfront Park and the pier at the Margaritaville Resort --will be open for business as usual.

Silversea's Silver Spirit crashed into a "mooring dolphin," a concrete block atop pilings that keeps the ships away from the pier, at the port while trying to depart on November 27. A video by Broadwave Live Cams (jump to the 38 second mark)

No one was injured on the ship or in the port. Damage to the ship was minimal, but the mooring was completely destroyed. The cost of the repair is yet unknown, but Key West City Manager James Scholl

he estimated it would be in the $500,000 range. Silversea and its insurers will be responsible for the repairs, Scholl said. An email to Scholl asking how the closure would affect cruise traffic was not immediately returned.

Cruise Critic members on the Silversea forums weighed in on the damage to the ship. Member Westwoodfolk said: "Just spoke with friends on ship. Apparently the only damage to ship was scratched paint. The winds are apparently very strong and in direction towards dock making it impossible to sail. Tides are also changing."

Member KeyWestLiz, who also posted her own photos and video, said: "I watched it as it left. It was very windy out there that night. It got a ways out before it was evident there was an issue as it started drifting back in … it scraped the ship up and left markings in several areas as it hit different sections during its attempt to redock. It did some significant damage to the south bollard at M dock."

Two other cruise ships successfully departed from the port on November 27, despite the heavy sustained winds. The U.S. Coast Guard had cleared the 691-foot-long Silver Spirit for departure, but the ship wasn’t able to turn around and crashed into the mooring.

Cruise Critic has contacted the Port of Key West for details of the incident, as well as information on where other ships due to dock there will call, and is awaiting a response. This story will be updated when more information becomes available.