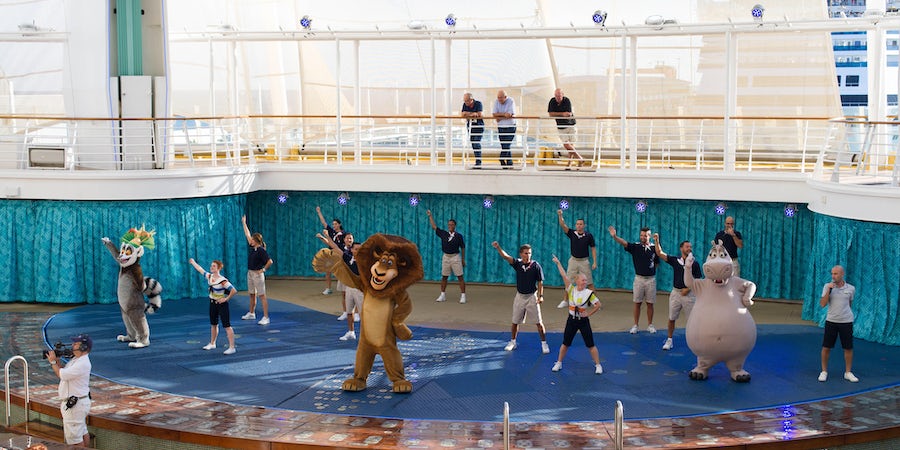 Dreamworks characters performing at the AquaTheater on Allure of the Seas (Photo: Cruise Critic)

Dreamworks characters performing at the AquaTheater on Allure of the Seas (Photo: Cruise Critic)

(10 a.m. EST) -- Starting on all sailings departing on or after April 1, Royal Caribbean will cease to offer the DreamWorks experience on any of its ships. The line announced the decision in a letter to travel agents and booked passengers that emphasizes the popularity of non-DreamWorks activities including glow-in-the-dark laser tag, escape rooms and the Sky Pad virtual reality bungee trampoline.

"Royal Caribbean is always looking to the future and exploring new ways to exceed our guests' expectations," the letter reads. "We've been conducting extensive research to better understand and anticipate what matters most to the families of today -- and tomorrow."

"What began with new family features like glow-in-the-dark laser tag and the Sky Pad VR bungee trampoline experience on Mariner of the Seas and Independence of the Seas will continue to evolve as Navigator of the Seas is amplified in March 2019. And we're taking our family flagships to a whole new level when Oasis of the Seas gets amplified later in the year."

On the nine ships that have the DreamWorks experience, the transition will be seamless, a Royal Caribbean spokesperson told Cruise Critic. These ships already have non-DreamWorks parades and ice-shows that will simply fill in. In other words, ships that offer parades will still have parades; ships with ice rinks will still have ice shows -- just like on Symphony of the Seas, which never had the DreamWorks experience.

The DreamWorks program launched in 2010 onboard Allure of the Seas; since then it has been added to a total of nine ships and offered such activities as character meet and greets, parades, the "How to Train Your Dragon" ice show and first-run movie showings of DreamWorks films.

All cruises that depart before April 1 will have the DreamWorks experience for the entirety of the cruise; programming will not cut off mid-cruise.