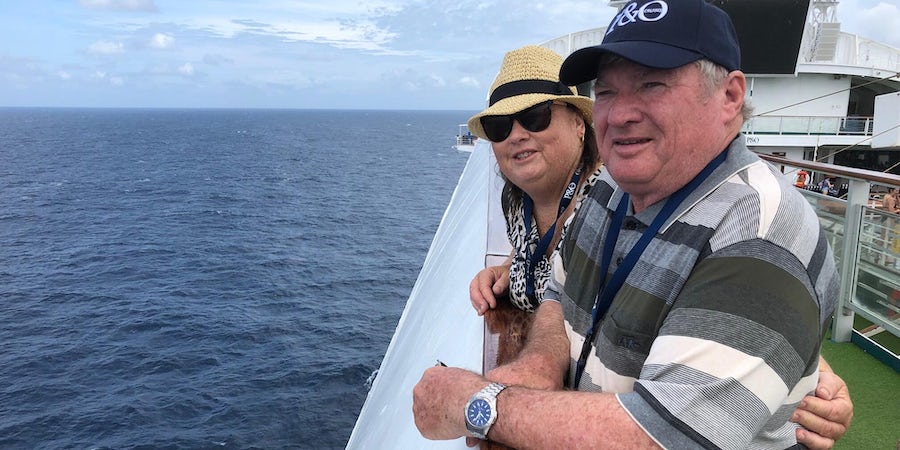 (11:50 a.m. AEST) – No drought about it, the 140 farmers invited on two P&O cruises are enjoying some ‘time out’ surrounded by water. The ‘drought relief’ cruises -- one on Pacific Dawn from Brisbane to the Whitsundays and another on Pacific Explorer from Sydney to Moreton Island – were organised to give Aussie farmers a much-needed break.

P&O Cruises worked with Rural Aid and its Buy-A-Bale campaign to set aside a large number of cabins across the four-night cruises. The NSW and Queensland farmers were selected with the support of the charity and Salvation Army’s rural chaplains.

Drought-stricken Queensland farmers Glenda and Des Gray (pictured above), who have endured six years of crippling drought, are among the families onboard Pacific Dawn this week. Glenda had long wanted to go on a cruise but she thought she would have to win the lottery to achieve her dream.

“It is incredible and the cruise is better than we could have ever imagined,” Glenda said. “Just coming out of the Brisbane River, we had a line-up of farmers watching and wondering how we could pipe all that wonderful water back home again.”

P&O Cruises President Sture Myrmell said it had been a pleasure to provide support to the rural community.

“Having seen the impact of the drought for myself, it is remarkable to see the resilience and courage of our farmers who still don’t know when this rolling natural disaster will end,” he said. “Our drought relief cruises on Pacific Dawn and Pacific Explorer will at least make a difference for the farmers that we have the privilege to host onboard.”