You may also like
Dismiss
2019 Atlantic Hurricane Season Outlook: What Cruisers Need to Know
Coronavirus: Updated Cruise Ship Policies and Cancellations Because of COVID-19 (2021)
Can a River Cruise Still be Fun in the Age of Covid-19?
Swan Hellenic to be Relaunched As New Expedition Cruise Line
Wave Season Cruise Deals 2021
7 Highlights From a Week Onboard Celebrity Apex
U.K. Black Friday & Cyber Monday Cruise Deals -- Extended
Emerald Cruises Officially Launches in Australia
The 2022 Atlantic Hurricane Season is Here: What Cruisers Need to Know 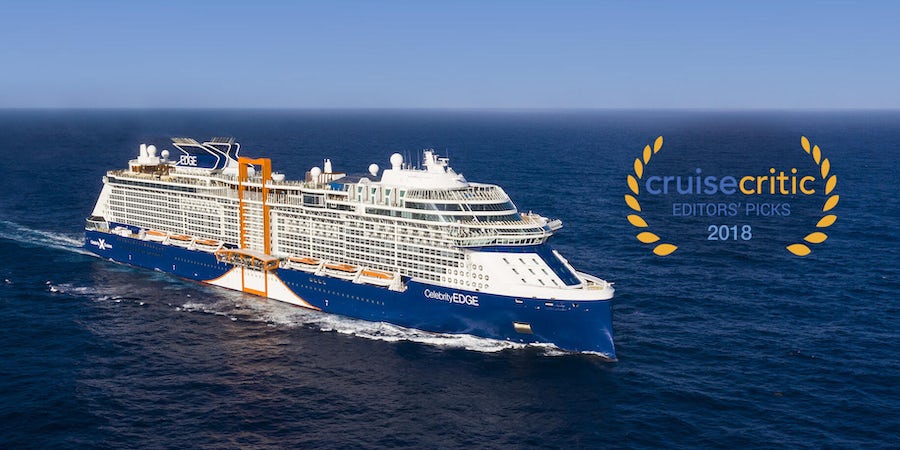 (4 a.m. EST) -- Celebrity Edge, Viking Orion and U by Uniworld's The A took honors as the best new cruise ships of 2018 in Cruise Critic's 11th annual Editors' Picks Awards.

The awards -- divided by ocean, luxury and river cruising -- are selected by Cruise Critic's team of international editors for a variety of categories, including best dining, best cabins and best for families. River cruises and luxury cruises are judged separately.

"As the cruise industry continues to evolve, travelers are rewarded with extraordinary options and experiences," said Colleen McDaniel, Senior Executive Editor of Cruise Critic. "Cruising already is one of the most groundbreaking travel industries, and cruise lines continue to raise the bar when it comes to guest experience -- both onboard and in port.

"This year's list of winners includes cruise lines that visit every continent, offer technologies that provide an even more personalized travel experience and boast features like a high-tech planetarium, cabins with infinite verandahs and even an onboard silent disco. These are the absolute best experiences at sea, and what’s most exciting is that there's even more to look forward to in 2019."

Cruise Critic editors have been sailing on Celebrity Edge since its late November debut, and describe it as “one of the most innovative ships we’ve seen in years." Highlights include a "floating" deck that moves up and down along the side of the ship, transforming into a new space depending on its location, and Infinite Verandah cabins, which turn the sitting area into a lanai which the touch of a button. Celebrity Cruises also was named Best for Dining.

Other standout awards in the ocean category include Disney Cruise Line, named Best for Families for the third consecutive year; Princess Cruises, which snagged Best for Itineraries for the second year in a row, as well as Best Shore Excursions and Best Cabins; and Holland America, awarded Best Value for Money for its breadth of inclusions such as dining options courtesy of an award-winning Culinary Council, its BBC Earth shows in the main theater, and new Rolling Stone Rock Room.

In the river category, best ship The A was praised for offering a fresh alternative to traditional river cruising for its casual onboard atmosphere and offbeat shore excursions.

Uniworld Boutique River Cruise Collection scooped up the award for Best River Cruise Line, with editors citing everything from its impressive dining options and wellness programs, to active shore excursions and multi-generational options. The line's S.S. Beatrice also was named Best Ship Refurbishment. Viking River Cruises was awarded Best for First-Timers for the second year in a row, as well as Best Itineraries thanks to its ships that sail all over the world, including Vietnam, China, Russia and most European rivers.

Meanwhile, the luxury category's best new ship -- Viking Orion -- was hailed for its thoughtfully designed public spaces and cabins, as well as its innovative planetarium. The line, which is the oceangoing leg of river-category winner Viking River Cruises, also was named Best Value for Money and, for the third consecutive year, Best Spa.

Seabourn received the Best Luxury Cruise Line award, with editors describing it as "everything a luxury cruiser is looking for," attributed to its fine dining, including a restaurant helmed by world-renowned chef Thomas Keller; all-inclusive fares; and some of the most personal service at sea.