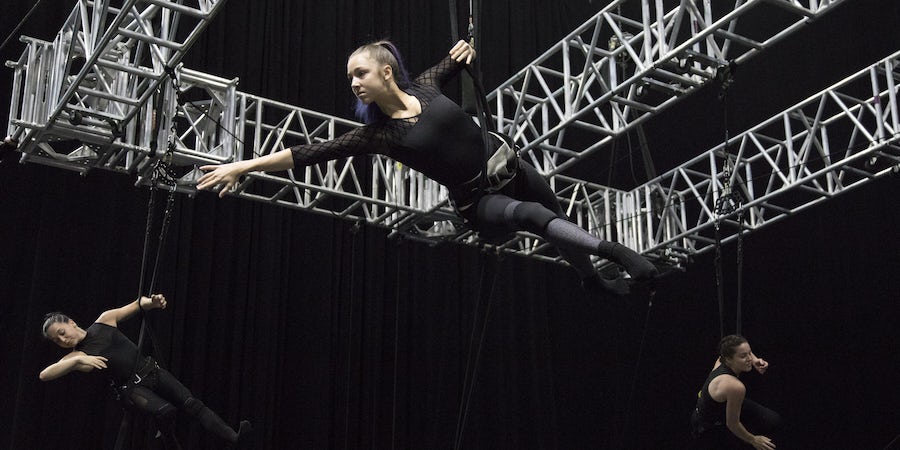 (9 a.m. GMT) -- Four months prior to the launch of MSC Bellissima, MSC Cruises has released the details of two new Cirque du Soleil shows that will debut onboard the new ship.

The second vessel in the line's Meraviglia Class, Bellissima will feature "Syma", a show about a sailor girl who meets several intriguing characters while lost at sea, and "Varelia", a damsel-in-distress love story with some refreshing twists.

Last week, Cruise Critic was given a rare behind-the-scenes look at the creation process during a visit to Cirque du Soleil's headquarters in Montreal -- a multi-building complex with an industrial but playful feel, where about 1,500 of the company's 4,000 employees are based.

We met with executives and designers in a glass-walled conference room overlooking the performers' training facility. (Imagine a backflipping gymnast's feet suddenly appearing in your periphery during a presentation or an acrobat gliding past on a set of rings while effortlessly doing a handstand in midair while you're trying to take notes.)

After learning about the show concepts, we toured prop, makeup and costume areas, learning how everything comes together. Along the way, we passed several employees, who had taken a midday break to socialise in the hallway over candy and freshly popped popcorn. This is the modern-day version of running away with the circus.

Below, we've outlined what you can expect from each of the 40-minute shows and what goes into making them.

Where did it all begin?

The partnership between MSC and Cirque du Soleil, which has been five years in the making, came to life in 2017 on Bellissima's sister ship, MSC Meraviglia, which currently runs two shows: "Viaggio" and "Sonor".

"There's no reason that onboard entertainment can't be as good as land-based, and I think that desire to push the envelope is what got us excited", said Yasmine Khalil, chief executive producer of Cirque du Soleil. "Cirque du Soleil has one standard, which is a very high standard, and so we wanted to be sure that if we were ever to be at sea again -- because we did have, once upon a time, an experience at sea with Celebrity Cruises -- we wanted ... to be able to deliver a product that would live up to passengers' expectations".

In this show, the main character, Syma -- rumoured to draw her name from the last part of the ship's moniker, Bellissima -- longs to explore the ocean and sets sail one night on her own. Her ship capsizes in a storm, and she clings to the mast, which becomes part of the acrobatic apparatus used in the performance.

On her journey, she meets several sea creatures, all dressed in the elaborate and breathtaking costumes that have become a hallmark of Cirque du Soleil, before washing ashore on an island. There, Syma meets a chief-like character with an oversized mask whose expressions are generated by a motion-sensing projector.

While visiting the island, Syma explores a magical jungle, where mystical creatures practice the art of foot juggling and "islanders" perform a rope-skipping routine. She also encounters "The Strange One" -- a local with two faces.

Mermaids make an appearance, as well, showcasing a bungee dance -- a first for Cirque du Soleil -- while attached to bouncy cords that make them appear weightless, as if they're swimming.

In addition to acrobatics and dancing, "Syma" incorporates props, including an impressive custom-designed pyramid structure that converts to serve a different purpose in each of the show's five main scenes.

"We really wanted to start with the water and the ocean as a theme", explained Benjamin Dupont, a Cirque du Soleil stage director. "A ship is basically an island of its own -- a unique community on the ocean.

"We wanted this first show to have an aesthetic that is really based on physical props -- things that we can actually see and touch with textures that you just want to feel".

In "Varelia", which the show's masterminds describe as "a medieval fairytale taking place in the future", a beautiful but lonely purple princess has been shunned by potential friends and suitors because of the color of her skin.

In the third of five acts, the princess is kidnapped by Mr. Pourprier, a villain obsessed with the color purple. She is subsequently rescued by the show's blind, urban hero, who is -- for obvious reasons -- undeterred by her appearance.

During their respective scenes, each main character is represented by a different type of music: piano for the princess, strings for the hero and brass for the villain.

The performance focuses less on props than "Syma" does, instead incorporating lights and lasers paired with classical music to soften the effect. In that vein, the stunning costumes and makeup are embellished with custom reflective and black light touches.

Despite the admittedly "damsel in distress rescued by a male hero" plot, the creators have managed to give the princess a somewhat sassy attitude while incorporating a message of inclusion and a love theme that has universal appeal across cultures and languages.

What goes into making a show?

The creation timeline varies from show to show, but the process is the same: build a team, consisting of a creative director, art director, costume director and sound/music director, as well as a cast that's pulled from a talent bank of about 55,000 from across the world.

Lots of brainstorming meetings take place to develop everything from general storylines and characters to detailed sketches of makeup.

Nearly all props and costumes -- including shoes -- are made in house, and everything is custom. Costume fabric (most often LYCRA) starts out plain white and is then dyed and screenprinted or painted by teams of textile designers, so there's never a worry that fabrics will be discontinued.

Custom moulds and 3D printers are used to create many props and costume embellishments, and designers think of everything, sparing no detail. For example, Syma's belt buckle was created by 3D printing, and it's bendable, causing less discomfort to the performer during acrobatic acts than a metal buckle would. Additionally, most clothing accents are detachable to allow costumes to be easily laundered on a daily basis.

In terms of technology, Khalil says the latest is used mainly behind the scenes so performances that run for several years are more timeless.

How do performers prepare?

A total of 27 people will make up the Cirque du Soleil cast and crew onboard Bellissima. Of the 27, 16 are performers, all with rare gymnastics, circus and dance skills. All 16 have roles in both shows.

They will train and rehearse on land for two weeks at the Montreal facility, spending hours being fitted for costumes -- which are tweaked if they're found to interfere with the performance -- and learning how to do their own makeup under the guidance of the company's team of professional makeup artists. They will then board the ship to begin their six-month contracts, spending a month and a half fine-tuning the performances before they launch.

The shows will take place in the ship's aft Carousel Lounge, which has a slightly larger rounded stage than the one on Meraviglia, featuring a giant LED screen for background scenes and a suspended carousel structure with winches for aerial acrobatics.

The creators of "Varelia" and "Syma" took special care to design performances that take a ship's lower ceilings into account and also chose show elements that are less likely to be affected by the ocean's movements.

MSC Bellissima will debut in early March 2019, with a christening celebration to be held in Southampton prior to a season of Western Mediterranean sailings. Details haven't yet been released, but Cruise Critic was told about 2,000 people are expected to attend, and Sophia Loren will serve as godmother (as she has for all new MSC Cruises ships since 2003).

The ship will feature the same offerings as sister ship Meraviglia, including solo cabins, as well as cluster cabins for groups; an indoor promenade with an 80-metre LED ceiling; sushi, teppanyaki and steakhouse restaurants and an onboard chocolatier; a large water park and kids club; and a two-deck indoor amusement park, including a basketball court.

Following the addition of "Syma" and "Varelia", four more custom-created shows -- two on each ship -- will debut on upcoming vessels MSC Grandiosa (October 2019) and MSC Virtuosa (September 2020), which will be part of the line's Meraviglia-Plus Class.