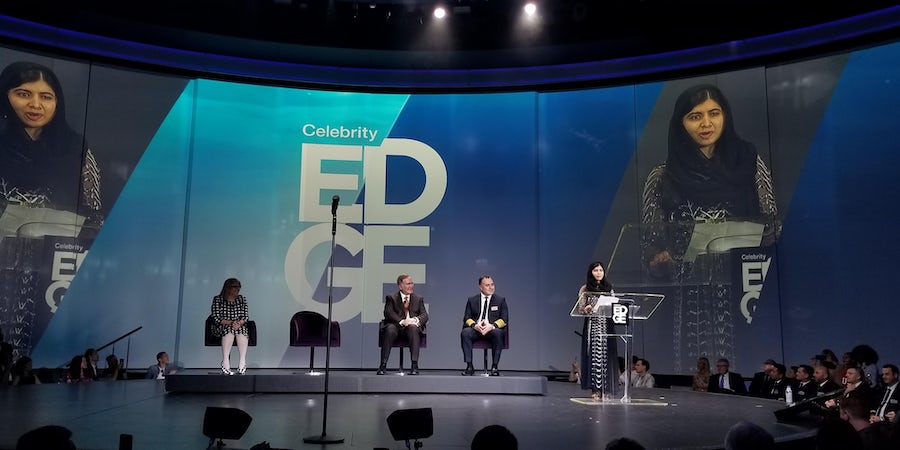 (6:15 p.m. EST) -- A powerful rendition of "Rise Up" by Andra Day, a moving introduction of godmother Malala Yousafzai, and the smashing of a bottle of Badoit sparkling water were all part of the proceedings that welcomed Celebrity Edge to the Celebrity Cruises fleet.

The ceremony, which was held in The Oculus, Celebrity Edge's main theater, was emceed by Celebrity Edge ambassador, designer Nate Berkus, and officially began with a procession of Royal Caribbean Cruises Ltd.'s board members and RCCL and Celebrity Cruises senior vice presidents, led by the Saint Andrew's Pipe Band of Miami.

But it was a performance by Grammy award winning singer/songwriter Andra Day, who belted out her hit, the self-empowerment anthem "Rise Up" that really got the proceedings started. As the song wound down, godmother Nobel laureate Malala Yousafzai -- along with Celebrity Cruises' president and CEO Lisa Lutoff-Perlo, Royal Caribbean Cruises Ltd.'s chairmain Richard Fain and Celebrity Edge Captain Costas Nestoroudis -- entered to a standing ovation.

"Welcome aboard Celebrity Edge," Fain said, admitting he'd been waiting five years to utter those words. "Edge is a beautiful ship and everybody is proud of the accomplishment. But she is a lot more than that," he added, referring to the transformational nature of the ship, which he expects will change the way all future ships are built.

Lutoff-Perlo also referred to the transformational nature of the ship and of travel in general. "Our purpose is to open up the world," Lutoff-Perlo said during her remarks. "We believe travel and experiencing other cultures enriches us."

But Lutoff-Perlo also talked about diversity and gender equality, a belief that drove the company's decision to choose Yousafzai as its godmother. The line didn't want anyone else, Lutoff-Perlo said, even putting together a video of female crew members asking Yousafzai to say yes.

"For a special ship we wanted a very special godmother," Fain said. "As a child Malala had the courage to stand up for the right of all people, including girls, for basic and safe education. She stood up for what she believed in, even in the face of continual harassment and threats on her life."

Fain choked up as he related the story of her attack but held his tears back as he introduced her.

"First of all I said yes," Yousafzai joked lightening the mood. "I don't know how I could say no after watching that video."

Although Yousafzai said she had never been on a cruise ship before, she said she was honored to mark its launch and to partner with Celebrity, a company, she said, that sees, as she does, the future is linked to the education of girls.

"As Celebrity Edge travels around the world, I hope vacationing passengers will feel inspired to learn more about girls' education," Yousafzai said.

"I name this ship Celebrity Edge. Bless her and all who sail on her," Yousafzai said, as she signed her name on a tablet, signaling the release of the bottle, which smashed against the bow on its first try.

One of the most innovative cruise ships to debut in several years, unique features found on Celebrity Edge include a "floating" deck called the Magic Carpet, which can double as a tender station or restaurant/bar depending on where it's located; "Infinite Verandah" cabins that can be either an outdoor space or provide more room indoors with the touch of a button; six new-to-Celebrity restaurants, including four that are included in the cruise fare; and the largest spa in the fleet.

The ship, which can hold 2,900 passengers at double capacity, will sail in the Caribbean for most of the winter season, before repositioning to the Mediterranean at the end of April.

Get a before-and-after look at Celebrity Edge in our slideshow, or check out some of the restaurants in our video highlighting the three most revolutionary dining experiences onboard.