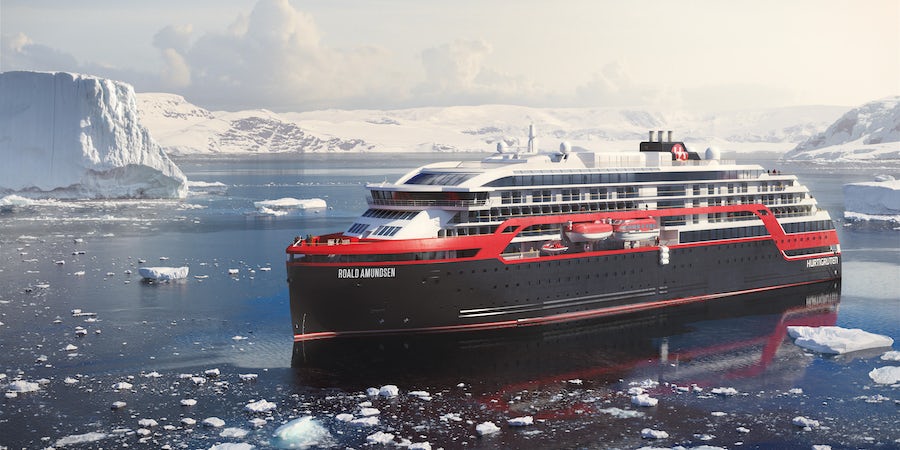 (1:05 p.m. EST) -- For the first time ever, expedition line Hurtigruten will sail to Alaska with a series of 13- to 17-night itineraries in summer 2020. The cruises will take place on the line's new hybrid electric-powered ship, Roald Amundsen, and will include visits to the Inside Passage as well as smaller, off-the-beaten-path ports visited by only a few other cruise lines.

Roald Amundsen -- named for the Norwegian explorer who in 1911 led the first successful expedition to the South Pole -- is slated to launch in summer 2019 as the first of three Hurtigruten ships built with environmentally-friendly engines that will aim to reduce fuel consumption by roughly 20 percent. It also will be able to sail with electric propulsion for up to 30 minutes at a time, allowing for silent cruising in remote areas.

"Alaska is a perfect fit for Hurtigruten and our expedition cruise concept," said Hurtigruten's CEO Daniel Skjeldam. "We will go where the big ships can't, taking guests far beyond the ordinary while exploring the true beauty of Alaska."

Below is a breakdown of the itineraries on offer:

Prior to its Alaska season, Roald Amundsen will spend its first year sailing between Portugal, Spain and France; Norway; and the Chilean Fjords, Antarctica and Falkland Islands.

The line's second hybrid electric-powered expedition ship, Fridtjof Nansen, also is scheduled to make its debut in 2020. The ship -- named for the Nobel Peace Prize laureate who in 1888 led a cross-country exploration of Greenland on cross-country skis -- will sail the Norwegian fjords and as far south as the Antarctic Circle.

"Along with her sister ship MS Roald Amundsen, MS Fridtjof Nansen will define a new era of expedition cruising," said Skjeldam. "Green technology combined with premium comfort, the unique Hurtigruten atmosphere and outstanding culinary experiences will allow our guests to make the most of their personal adventure."

The as-yet-unnamed third new hybrid electric-powered expedition ship, which will be even larger than its two sister ships, is expected to be completed by Norway's Kleven Verft AS in the second quarter of 2021. The construction of the three ships is the largest single investment in Hurtigruten’s history.

Hurtigruten has emerged as an industry leader in environmental awareness. Skjeldam has said the company’s goal is to be "the greenest cruise line in the world."

Earlier this year, Hurtigruten became the first to ban single-use plastics -- including drinking straws, plastic bags, cutlery and single-use butter packaging -- on its ships. It is also retrofitting at least six ships to replace diesel fuel with a combination of large batteries, liquefied natural gas and biogas, a fossil-free renewable gas produced by dead fish and other organic waste.