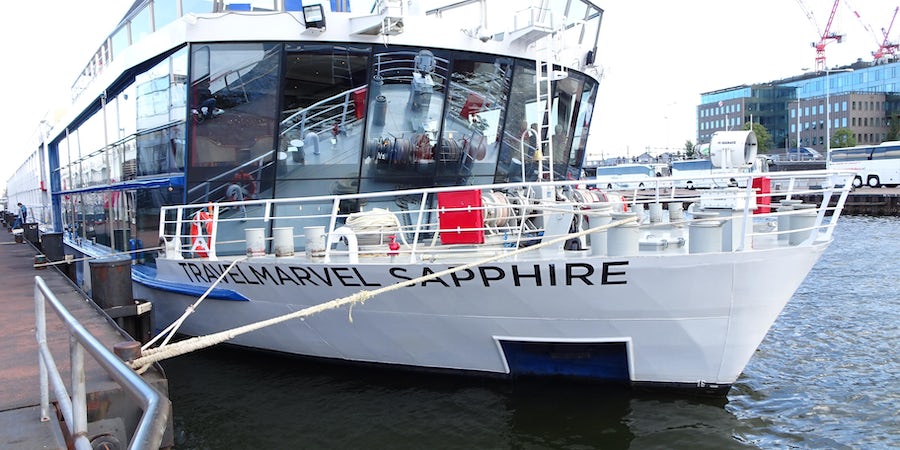 Just Back From a European Gems Cruise with Travelmarvel

(9:15 a.m. AEST) -- Travelmarvel's 14-night 'European Gems' cruise, between Amsterdam and Budapest, travels along three rivers, passing through five countries and countless navigational locks. As the second brand of Australian company APT, Travelmarvel has three vessels plying the route -- Travelmarvel Sapphire, Travelmarvel Jewel and Travelmarvel Diamond – all of which were refurbished in 2018. We sailed on Sapphire, which looks smart and refreshed after its upgrade.

The itinerary is the most popular route operated by almost every river cruise company in Europe. More than 20 hilltop castles vie for attention along the Rhine Gorge, a 65-km stretch of the Rhine River where vineyards of the riesling and grauburgunder (pinot gris) are planted on the slopes. Medieval towns seem to spring straight from storybooks with their cobblestone streets and timber houses, while the classic cities of the Danube -- Vienna and Budapest -- are architectural feasts.

Make no mistake, Travelmarvel is less luxurious than five-star lines. APT’s ships, for example, have multiple indoor dining venues and lounges whereas Travelmarvel ships have just one of each. Some APT ships have a pool on the sun deck, whereas Travelmarvel does not. However, Travelmarvel’s upgraded cabins are quite large with plenty of space to move around, rather than the bed taking up most of the room. Naturally there’s a big price difference between the two companies when comparing similar cabins, similar times of year and when taking in offers such as “Fly Free”, which both lines offer.

Travelmarvel’s 15-night Amsterdam to Budapest cruise, departing late September 2019 in a cabin with a French balcony (where the floor to ceiling window slides back to give access to the open air and unimpeded views) is $9,390 per person twin share. The APT itinerary for the same time of year and similar size cabin is $13,495 -- a difference of $4,105 a person. The big problem with all river ships is that they sell out quickly and the lower grade cabins (which have cheaper prices than these mentioned) are snapped up, often a year ahead of sailing.

While there are fewer restaurants to choose from and interiors are not as stylish, Travelmarvel’s river cruises deliver the same river scenery, serve great food (everyone was raving about it on our trip), provide free bicycles for those who want to venture out on their own, and budget-minded passengers may even have money left over to spend on further travel in Europe.

For those who love historic fortresses -- whether they be in ruins, covered in moss or with flags flying from the turret -- the Rhine Gorge is a delight. It's hard to know where to look when cruising this stretch of the Rhine as the cruise takes in a total of 23 castles dating from the 11th to 14th centuries. The route stretches between the townships of Koblenz and Bingen, where there seems to be a castle every 500 metres on both sides of the river. Luckily, the ship spends three hours in the gorge and the cruise director provides a commentary about each of the castles. Some of the most impressive castles include the Rheinstein, built around 1300 and now owned by a former opera singer; the Marksburg, which is the only fully intact castle on the Rhine; and the Pfalzgrafenstein, built on a promontory that juts out into the river. Another attraction is Lorelei Rock, a steep cliff known as the place where ships foundered when sailors were lured by the song of the local siren, Lorelei. Keep an eye out for her diminutive statue, which sits at the base of the cliff.

Half-timbered houses lining cobblestone streets, red-roofed towers of various shapes and sizes, window boxes in full bloom and historic fountains -- these features and more fill the old town centres of medieval gems visited along the rivers. Rothenburg is one of the prettiest and its small square, with a timbered house set between two towers, is said to be the most photographed scene in Germany. It's possible to walk along several kilometres of the city wall and wile away hours in the fascinating Christmas museum and Christmas market. Other picturesque towns include Wurzburg on the Main River (the river that connects the Rhine to the Danube) and Bamberg, built on seven hills and famous for its dark smoke beer. Also popular is Little Venice, named after a stretch of the canal that is lined with colourful houses.

The thing to do in Rudesheim -- apart from admiring its three castles and swooping over the hills in an old-fashioned bucket-scoop chairlift -- is to visit Siegfried's Mechanical Musical Instrument Museum. The museum houses a collection of 350 amazing instruments, from the 19th and early 20th centuries, such as phonographs with shiny horn speakers and elaborate fairground organs encased in beautifully crafted cabinets. The museum is housed in a 15th century former knight's mansion, the oldest building in town. Afterwards, settle into a cafe on the main street and try the Rudesheimer Kaffee, a strong beverage of Asbach brandy, coffee and lashings of cream.

The cities of Amsterdam, Cologne, Bratislava and Budapest are located right on the river (be it the Rhine or the Danube), while Vienna is just a short drive away. It's easy to set off and explore these cities at your own pace and be back on board before the ship departs. Free guided tours --which can be a combination of coach and walking tours -- are also offered in each port. In Amsterdam, the option is a half-day canal cruise.

Whether it's the mix of friendly rivals -- Australians and Brits -- or the free-flowing wine at dinner, a Travelmarvel cruise is very sociable. Solo travellers are also welcomed into groups, and tables are alive with animated conversations. As for the evening atmosphere, we were fighting for space on the dance floor. From the first strains of a pop song, folks jumped up and started to boogie. It was infectious and, by night three, there was a conga line.

Even if you're not a fan of sausages, you'll be singing the praises of the humble frankfurt by journey's end while ordering another stein. German bars and cafes are known for their hearty meals and the classic combo of pretzels and beer. As the ship cruises towards Bamberg, the chef and barmen decorate the lounge like a beer hall to stage a fruhschoppen, which literally means, 'an alcoholic drink before midday in company'. During this mini-feast, passengers tuck into four different types of frankfurt, along with sauerkraut, pickles, pretzels and beer, while listening to recordings of an oompah band. Then, believe it or not, it's time to head down for lunch.

Mid to late 2018 was a challenging year for European riverboats as water levels on the Danube hit their lowest in years as a result of the long, hot summer and drought. Water levels were particularly low between the German cities of Passau and Regensburg, which meant several Travelmarvel itineraries -- and those of other company's vessels -- could not continue downstream as far as Budapest, forcing them to terminate (or begin) the cruise in Straubing, some 20 km from Regensburg. Passengers overnighted on the ship in this port and were taken on optional tours to Salzburg, Austria, or Cesky Krumlov in the Czech Republic. The rest of the planned cruise itinerary was undertaken by coach with overnight hotel stays in Bratislavia, Vienna and Budapest.

According to feedback from passengers, Travelmarvel pulled out all stops to provide a great experience despite the setback. The optional paid tours were offered free of charge, good hotels (with breakfast) were provided and passengers were given cash to buy lunch and dinner. Although the water levels posed a logistical nightmare, the difficulties were reportedly met head-on with good grace by the ship's cruise director and staff.

• The writer was on board for half of the 14-day cruise, travelling between Amsterdam and Nuremberg.