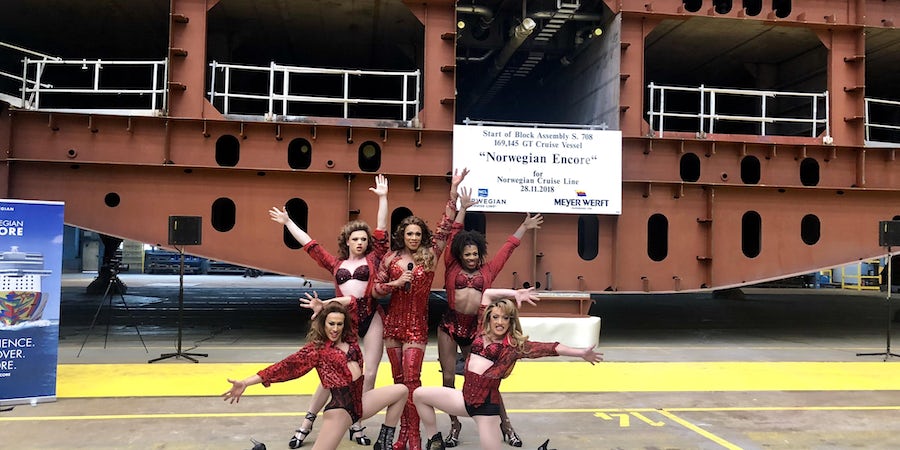 (6 a.m. ET) -- The worldwide theatrical smash Kinky Boots will be the headline show on Norwegian Encore, the next megaship from Norwegian Cruise Line.

It will be the first time that a version of the Tony-award-winning musical, with songs written by pop icon Cyndi Lauper, will be performed at sea. Norwegian Cruise Line President and CEO Andy Stuart announced the news at Norwegian Encore's keel laying at the Meyer Werft shipyard in Papenburg, Germany. The ship debuts in November 2019.

"After Jersey Boys, what else is there?" Stuart said rhetorically, referring to the hit show that's currently on Norwegian Bliss. Then a parade of drag queens walked out of a bus in the cavernous shipyard. Lola, the lead character who wears the show's signature red stiletto boots, sang "Land of Lola," one of the musical numbers.

Stuart said the inclusive message of the show, which follows the fortunes of Lola and her unlikely friendship with a struggling shoe shop owner, suits the Norwegian cruise experience. "We let guests be who they want to be and we recommend that they leave their expectations at the door," he said, quoting the show. "We think this is a show that's going to knock it out of the park."

Richard Ambrose, vice president of entertainment for Norwegian Cruise Line Holdings, said that the show, which will be cut down to 90 minutes, follows on the success the line has had with Priscilla Queen of the Desert, which is on Norwegian Epic.

"Our guests really want to be pushed," Ambrose said, noting the popularity that Kinky Boots has had worldwide. "People are on vacation, they don't want something heavy and deep."

Other entertainment slated for the 4,000-passenger ship will include The Choir of Men, a show that recently debuted on Norwegian Escape. The ship will also feature Happy Hour Prohibition: The Musical as well as The Cavern Club, a bar that evokes the early Liverpool days of the Beatles, complete with live music by a Fab Four cover band.

Norwegian Encore will also expand its popular go-karts at sea with a two-level race track that's larger than the ones currently on Norwegian Bliss and Norwegian Joy. Upgrades will include a covered viewing area in the center of the track where spectators can provide a turbo boost to passing carts by tagging them with a laser beam. The race track will also extend over the side of the ship, as much as 13 feet.

Norwegian Encore will be the fourth and final ship in Norwegian Cruise Line's Breakaway Plus Class, joining siblings Norwegian Escape, Norwegian Joy and Norwegian Bliss. It's also the last in a series that's being built at Meyer Werft; the line's Leonardo-class ships, which debut in 2022, will be created at Fincantieri in Italy.

"There's mixed feelings when you come to the end of a class," Stuart said.

Sailing out of Miami every Sunday from November 17, 2019 to April 12, 2020, Norwegian Encore will sail seven-night itineraries that visit San Juan, Puerto Rico; St. Thomas, U.S. Virgin Islands; and Tortola, British Virgin Islands. Beginning April 22, Encore will reposition to New York City from where it will offer seven-night cruises to Bermuda.