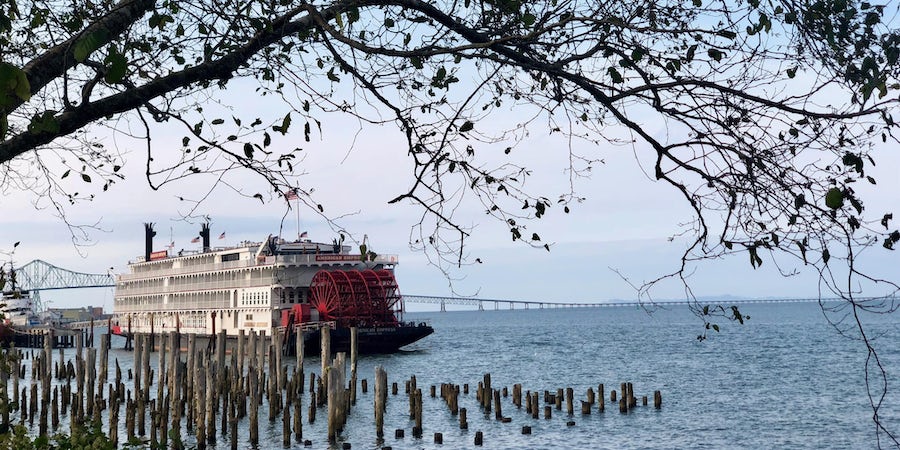 Just Back from American Empress: Cruising the Quirky Pacific Northwest

When it comes to American river cruising, the Mighty Mississippi often grabs the headlines. But after a few days sailing the Columbia River in Washington and Oregon, we're in love with the cute small towns, quirky museums and spectacular scenery that you can find only in the Pacific Northwest.

Our cruise took place on American Empress, a 223-passenger boat operated by American Queen Steamboat Company. Our itinerary was a shortened version of the usual weeklong cruise, encompassing only four days and three nights; we sailed just the Columbia portion. While this itinerary generally skews Baby Boomer and up, this Gen Xer still found a lot to see and do.

Here are some of the destination highlights of this itinerary.

This historic fishing town, located where the Columbia River meets the Pacific Ocean, is legendary among mariners -- and not necessarily in a good way. The Columbia River Bar is considered one of the most hazardous navigation channels in the world. So many ships have ended up wrecked on the rocks or lost in the waves that the bar is called "the graveyard of the Pacific." You can learn all about it at the excellent Columbia Maritime Museum, located at the wharf where American Empress docks.

Climb the spiral staircase of the Astoria Column, either by hop on, hop off bus (provided for free on all American Empress Cruises) or a vigorous hike, typically led by the cruise ship's drummer. At the top, you can enjoy 360-degree views of the Astoria's rivers and mountains, and imagine what the area looked like when Lewis and Clark passed through on their historic exploration. This is also the place to indulge in the childhood pastime of flying model airplanes; find the balsa wood planes for sale in the gift shop for $1 or simply pick up a few of the ones that have already been flown, bring them to the top of the tower and let them fly.

Pop culture fans will want to wander the steep streets to track down some of the sites that were used in the treasured 1985 cult film The Goonies. While we found Mikey's house perched high on a hill, you can't tour it; the nearby Astoria Coffee Deli, which is also seen in the movie, contains film souvenirs. We walked there via the Cathedral Tree Trail, which takes you through classic Pacific Northwest greener-than-green rainforest. Finish your day in Astoria with a craft beer from one of the town's four breweries; we loved the house-brewed lager at Fort George Public House.

In the heart of the Columbia Gorge, Stevenson boasts the dense forests and close-in cliffs that make this part of the Washington-Oregon border so spectacular. While boats dock on the Washington side, it's Oregon's iconic Multnomah Falls that shouldn't be missed. On American Empress, this is offered as a premium excursion, but for $69, the views are worth it.

The hop on, hop off bus makes a stop at the Bonneville Dam. Even if you aren't an engineering nerd, the fish ladders that allow species such as Pacific salmon, lamprey, shad and sturgeon to continue the migration to their traditional spawning grounds are pretty cool. It's hard not to internally cheer when you watch the fish jump from one level to another. The Columbia Gorge Interpretive Center, another stop on the bus tour, presents an interesting look at the river and what it meant to the area's Native American population, as well as the Oregon Trail settlers who emigrated in the mid-1800s.

The climate changes dramatically when you reach this frontier town in central Oregon. The landscape is high desert, and the views are windswept open bluffs instead of tree-covered mountains. Lewis and Clark stayed here too, and their campsite is a short walk from the marina. Our riverlorian took us there, explaining the history on the way.

In town, the National Neon Sign Museum just opened its doors in August 2018. Filled with neon signs from director David Benko's personal collection, the museum also explains how neon transformed retail stores during the Great Depression -- ironically, the heyday of the gaudy lighting. Don't miss the ballroom, which he's turned into a historical small-town Main Street.

It's an extra fee to take an excursion to the Western Antique Aeroplane Automotive Museum (WAAAM) in nearby Hood River. Trust us, it's worth it. The museum is packed with vintage airplanes, all of which are capable of flying. Gearheads will appreciate the rows and rows of vintage cars -- and the rides in them that are offered for free. Afterward, wander around the outdoorsy town of Hood River, where you'll want to take time for samples at Full Sail Brewery. During the summer, look for windsurfers; Hood River is considered the windsurfing capital of the world.

We can't wrap up highlights of this itinerary without putting in a plea for cruisers to spend an extra day or two in Oregon's largest city. Portland is the definition of quirky, with craft beer, artisanal doughnuts, independent bookstores, and arts and crafts galleries -- all of the elements hipsters love (and likely those older, too).

The crowds line up for the pink-boxed, heavily frosted Voodoo Doughnuts. But we enjoyed the more delicate flavors of Blue Star Donuts, which defines itself as "doughnuts for adults." Try blueberry bourbon basil or the buttermilk old-fashioned. Walk a few blocks to the famed Powell's Books to pick up reading material for your cruise (or your flight home). Be prepared to spend a few hours -- the bookstore is a block long and it's way too easy to lose yourself among the stacks.

Even in November, you can enjoy Portland's gardens; although the flowers that inspire the nickname "City of Roses" are gone, you'll still get the remnants of autumn leaves at the Portland Botanical Garden. Located within Washington Park, the space is considered the most authentic Japanese garden outside Japan. If the weather is clear -- rare, but it does happen -- you'll be rewarded with outstanding views of snow-capped Mt. Hood.